for some sexuality, brief nudity and language. 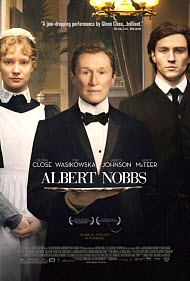 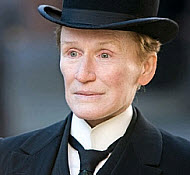 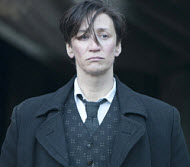 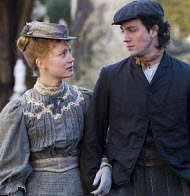 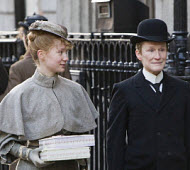 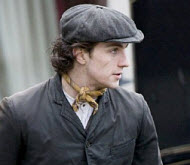 feeling alone in the world

GAY—What’s wrong with being gay? Answer

What about gays needs to change? Answer

loss of loved one

No one has ever suspected the truth about Albert Nobbs (Glenn Close). They treat him with respect. He does his job well. In his small room in the boarding house where he works, he is saving up to buy a tobacco shop. But when he is asked to share it for the night with another man, Hubert Page (Janet McTeer), the truth comes out. “He” is actually a “she,” working in a time when women could not make it on their own in the world. Albert is terrified her secret will become known, until she discovers Hubert is in the same situation. But she has made a success of things, even going so far as to find a wife to carry on the illusion and give her companionship.

Emboldened in the hope that she may not have to go through life alone, Albert begins to shyly court the new housemaid, Helen (Mia Wasikowska). What she does not realize is that Helen is involved with a young man (Aaron Johnson) whose greed will change all of their lives forever.

Glenn Close spent years lobbying to bring this film to the big screen, and it earned her an Oscar® nomination in the process. The movie is uncertain just what its message actually is, and, as a result, the audience is divided on the reasons for Albert’s behavior. Some believe she saw a chance to become respectable and took it, escaping in the process an abusive past that makes it easier for her to hide behind a disguise than face her true self in the mirror. Others see it as a Victorian exploration of same-sex attraction and gender confusion. Albert never informs the audience whether her desire for a wife is merely to further her desire to keep up a shop, or if she, like Hubert, is desirous of a physical union with someone of the same sex. She also does not tell us if she really believes she should be a man, or if it is just a farce.

As a Christian, this movie filled me with different emotions. I cared about Albert. I mourned her insecurities and sense of utter abandonment. I was saddened to hear about her sexual abuse as a young woman. I wanted her to find fulfillment and liberation in knowing that Christ loves her, even if no one else does. But much of the production made me deeply uncomfortable, due to its emphasis on homosexuality. It’s hard to latch on emotionally to the film; it is awkward and uncomfortable at the best of times, with an engaging subplot and an unsatisfying conclusion. I’m not sure if it is the subject matter that made me uneasy or if there’s something lacking in the screenplay, but whatever it was, it pales in contrast with the performances, which are rich and memorable in their own right.

The R-rating is earned through a half dozen abuses of Jesus’ name and as many f-words. Nonsexual nudity includes several glimpses of women’s bare breasts, and side nudity on a man (he wakes up in the same room as another man; we are not sure if this indicates a homosexual encounter or if both merely got drunk and passed out). One early scene includes oral sex. Several people in the house are involved in intimate relationships outside of marriage, and a child is born out of wedlock. There is a reference to a woman having been gang-raped when she was very young. A woman passionately kisses another woman (that she believes is a man). Violence involves a scuffle between characters; one hits their head on the wall.

Women dressing up like men is nothing new to cinema, or to literature for that matter, but, in the end, their true gender is revealed and happiness is found. That is not the case here and, in spite of being beautifully filmed, the audience is left uncertain of how they are meant to feel, other than in mourning for a life that was not lived to the fullest. Fear comes across strongly in every frame—fear of discovery, of being outed, of having to give up the facade. In one poignant scene, Albert dons a dress and walks out on the beach—she winds up running, laughing, free in the wind—for once, liberated from her disguise—then returns, once more, to the dour suit of a butler. That scene reminded me of our inclinations as humans… to see and experience the freedom of Christ, and then to choose to return to our insecurities and fears, to hide.

If nothing else, this film is cause for some interesting discussions. But it’s not something I would like to see again.