for thematic elements and some perilous action. 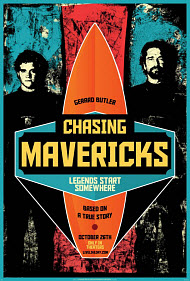 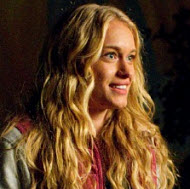 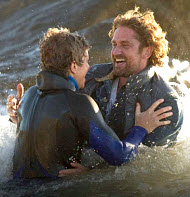 mentoring a fatherless young person—teaching them to be strong, reliant and courageous

being abandoned by a parent(s)

Inspired by a true story, Jay Moriarty, a boy from Santa Cruz, California, always had a passion for surfing. Ever since he was a little boy, his heart belonged to the ocean, as we see him counting the time between the crashes of the waves. One day as young Jay is counting the time between the crashes with his friend, Kim, he accidentally gets knocked over by a giant wave while standing on the edge of a rock, falling into the ocean. Luckily, he is saved by a local surfer and neighbor, Frosty Hesson (Gerard Butler).

Seven years go by and it’s apparent that Jay and Frosty have remained friends. One night Jay, unbeknownst to Frosty, climbs on top of Frosty’s car as he is driving off to the local beach to surf. Jay watches as Frosty rides what is known as the “Mavericks Wave,” the biggest ocean wave in the world. Frosty discovers Jay spying on him, and Jay begs Frosty to teach him how to ride the Mavericks Wave. Frosty agrees to train Jay to ride the wave, but warns him of the risks, and the fact that he only has twelve weeks to get prepared to ride Mavericks. “Chasing Mavericks” is a story of friendship, strength, determination, and the challenge of facing your fears, even when the challenge seems to great.

This must be the year for “inspirational” movies. It seems that somehow, someway, I’ve been drawn to review these films (such as the film “Won’t Back Down” that I reviewed a few weeks ago). Prior to viewing this film, I knew only the basics about the story and was not completely familiar with surfing. Sure, I knew what surfing was, but didn’t understand the true concepts of the sport until after viewing this film. I truly walked out with an appreciation not only for the sport of surfing, but also an appreciation for this film. I just couldn’t believe how well this film was made (of course, when Gerard Butler is not only acting but producing this film, you have some idea how good this film is going to turn out).

The message behind this movie is one that, as far as I recall, makes itself present throughout the entire film, and that is the message of “facing your fears.” I was pleased that this was promoted throughout the film, not just from the main characters like Jay and Frosty, but from other supporting roles as well, which can only strengthen the film, not weaken it. Cinematically, this film is spot on, and I mean, REALLY spot on. The camera work is excellent, the music is fine, and the performances are well done. Of course, many people are familiar with the fine acting of Gerard Butler, which is impressive. However, the real star of this film, in my opinion, was the actor playing Jay, Jonny Weston. Okay, so maybe Jonny’s acting isn’t “up to par” with a veteran like Butler, but I was still impressed, maybe not so much with what Jonny’s character said, but also what he didn’t have to say. Let me also point out that Butler and Weston make a good team. The interactions between the two characters are believable, and the development of the two is well formulated, minus a few elements that could’ve been added for good measure. I could continue with more praises for this movie. However, I’m going to save those for the final portion of my review.

Before I get into the suggestive material, I would say the MPAA is right in giving this movie a PG rating for “thematic elements and some perilous action.” This film, for most, would be considered safe for viewing by children and parents, but there are some intense moments (some involving peril).

Violence: Mild. As I said in the synopsis, in the beginning of the film, Jay is pulled into the ocean by a giant wave and is seen struggling in the water until he is saved by Frosty. Another scene involves a child smashing a side view mirror of a car with a baseball bat. The most intense scene was, again, towards the beginning of the film, which is when Jay walks into the house and sees his mother being verbally abused by a man (it is unclear who this man is). In response, Jay physically attacks the man, causing the fight to continue outside and the police being eventually summoned to the house. Lastly, there is another very brief fight scene between Jay and one of his friends in the restaurant they work at.

Profanity: Mild. The language is pretty tame. The term “pee-wee” is used, as well as Jay being called, several times, “little trash” and the term “p*ss” is used. There is one use of “Oh my G_d” and “God.”

Sex/Nudity: Mild. In the beginning, Jay receives a kiss from one of his female friends, Kim. In another scene Jay and a friend strip down to their underwear to jump into a pool (Kim also takes off her clothes, but she is wearing a fully covered bathing suit underneath). Lastly, Jay and Kim, once Kim admits her feelings for Jay, kiss passionately (again, very brief and nothing that couldn’t be shown in a PG film).

Other: Jay, Kim, and his friend sneak into a public pool in the middle of the night. One scene involves Jay skipping school to watch the waves in the ocean as part of his training. There is also a scene where one of Jay’s friends is seen making a shady monetary transaction with a group behind a restaurant (this may have involved drugs, but I’m not entirely sure). Jay hides that he is training to ride Mavericks from his mother. In another scene, Frosty asks Jay to get his mother to sign a permission slip to train, and Jay has Kim forge his mother’s signature. One of the main characters dies of a stroke. Lastly, Jay is seen throwing up on the side of the road on the way to the beach.

The main message of this movie is the idea of conquering our fears. Various conversations take place between Frosty and Jay concerning what fears they face. Jay is hesitant, at the beginning, to outwardly admit what he’s afraid of, but finally does tell Frosty in the end by means of a letter.

Fear is a complex emotion, but one that is not from God. Fear is driven by the evil one, Satan. As Christians, we must take our stand against Satan and his determination to drive us into fear. Satan wants nothing more than to have fear control every aspect of our lives, because then we do not put our trust, our strength, in Jesus and in the Heavenly Father. When we have God, we need not fear anything. God tells us in Isaiah 41:10…

“So do not fear, for I am with you; do not be dismayed, for I am your God. I will strengthen and help you; I will uphold you with my righteous right hand.”

I walked into a matinée showing of “Chasing Mavericks.” There were only several people in the auditorium. It’s a shame, because “Chasing Mavericks,” in my opinion, is a much better choice than other films that are out right now (such as “Silent Hill: Revelation 3D” or even “Fun Size”). Sadly, many may not choose to see this film. When I told people I was going to review “Chasing Mavericks,” the responses I received were either, “I’ve never heard of that film,” or the equivalent, “What’s that movie about?” We should be writing to Hollywood, asking them to produce and promote more films like this… films that inspire and encourage others with strong, positive, family-friendly messages. This is truly a film that receives a strong recommendation, and for that I support the rating and number of stars I have given it, despite the objectionable content that is in this film. Again, I commend the writers, director, and the entire cast for producing a well made film. If you choose to see this movie, I promise you it is worth the price of admission and strongly encourage parents to bring older children and teens to see this inspirational, well told story.

Positive
Positive—This was a wonderful, true story about a fatherless boy who found a mentor in an older surfer who taught him to be a strong, reliant, good person of courage. Surfing and the mentor rescued the boy. No sex, no foul language, no violence. You feel sad in the end because the boy was rescued by surfing and never found Christ. Jay Moriarty passed away the day before his 23rd birthday in a diving accident, which is conveyed in a few sentences at the end of the movie.

The movie is focused on his triumph over the waves. The surfing footage is incredible, it is a beautiful movie to watch and you feel like you are out there in the water with them. Probably wouldn't take a child who didn't know how to swim or was afraid of the water.
My Ratings: Moral rating: Good / Moviemaking quality: 4½

Gail, age 58 (USA)
Positive—Just an excellent movie to watch for the whole family. An uplifting movie about a fatherless teen who finds a father figure in an aging surfer. This is about surfing, facing your fears, and finding a good family example. It is a visually stunning movie. You can almost feel the strength of the waves from watching the movie. The movie itself had almost nothing objectionable. A slight indication there was drug use by a bully and his friends. I would highly recommend this movie.
My Ratings: Moral rating: Good / Moviemaking quality: 4½