To Rome with Love

for some sexual references. 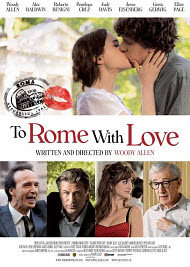 Love is in the air in Woody Allen’s follow up comedy to his surprise hit “Midnight in Paris.” Only, this time around, there is no time travel, no historical characters, and no moral values. Although I don’t recommend “Midnight in Paris” in terms of safe, clean entertainment, “To Rome with Love” steered clear of any moral values whatsoever. Multiple characters commit adultery, sexual immorality and homosexuality are shown in a positive light, and materialism, also comes into play, in this distasteful comedy.

But let me back track a little bit. This film deals with many plots about different characters and their personal lives during a painful 102 minutes. One man becomes famous for no reason other than people finding him “interesting”, an American college student cheats on his live-in girlfriend, a newlywed couple fall into the act of committing adultery, and a man visiting Rome with his wife wants to turn their future son in-law’s father into a professional opera singer.

There really isn’t a plot, and I don’t want to go into great detail about each “mini story”. The film jumps from story to story so much that I completely lost track, and the longer the movie got, the more I just wanted it to end. There was too much going on in this mess of a comedy. Woody Allen disappointed me with his follow up film to “Midnight in Paris.” His direction weakened in a year’s time, the script lacked substance, and the performances were very disappointing (especially Woody Allen’s). The only thing I liked about this film was the cinematography and beautiful shots of Rome and the sights the city offers. The cinematography alone saved this film from being a complete disaster.

In terms of content, this film was fairly safe up until the half way point. That’s when things got really messy. The language was on the lighter end with the f-word used once (but in a sexual context), four uses of bulls***, about five abuses each of God’s and Jesus’ names, and a few uses of “hell.” The word “schmuck” is also used a couple of times. There is no violence, with the exception of a robber holding a gun and threatening to shoot a couple of characters, and a character getting stabbed in a stage play. There is also some alcohol consumption, light drug references, and references to Communism and atheism.

However, the content above is the least to be concerned about. There are numerous acts of adultery on display, sexual immorality, and graphic sex references; albeit, there is no nudity. One married man is seen in bed with a single woman, and, later in the scene, another woman walks in implying that she is next in line. Another married man is seen starting to have sex with a prostitute, and we see them after the fact. The same man’s wife is seen in another scene being lured into bed with a celebrity, but later ends up in bed with another man instead. After both acts of adultery, implied sex is shown between the married couple. We also see an unmarried couple starting to have sex in a car, but the camera only shows the scene from the outside (sounds are heard while the car moves vigorously). Characters ogle each other, and there are also many (sometimes graphic) sexual and homosexual references. We see a man showering in a few scenes, with his privates barely obscured.

So, “To Rome with Love”, is it worth taking the trip? Absolutely not. Not only is this film filled with immorality and typical Hollywood worldviews, it’s not even worth watching for entertainment purposes.

This is probably one of the most morally offensive films I have seen in a long time. The “R” rating for “some sexual references” is very misleading. After watching this film and looking at the rating reason, I am really make concerned with the job the MPA is supposed to do. Yes, the film was well worthy of the “R” rating, but if I were to give it its rating reason, it would have been more along the lines of “for sexual content including references and for some language”. I feel that the MPA neglected the fact that this film contained numerous moments of sexuality and profane language.

Matthew 5:28 warns us about adultery: “But I say to you that everyone who looks at a woman with lustful intent has already committed adultery with her in his heart.” This film tries to lure its audience in with its attractive actresses and displays characters lusting for one another. “He who commits adultery lacks sense; he who does it destroys himself” (Proverbs 6:32—ESV). The characters lack sense but their acts are still shown in a positive light. But most of all, Hebrews 13:4 sums this film up perfectly in terms of adultery: “Let marriage be held in honor among all, and let the marriage bed be undefiled, for God will judge the sexually immoral and adulterous.”


This film displays sexual immorality and adultery in a positive light, and each and every character gets away with their acts with no consequences.

Although I sat through this movie, I can only pray that those who read this review choose to avoid it. This film doesn’t have any redeeming value whatsoever for the exception of the love for family (which can be seen in even the worst of films nowadays). Hopefully, “To Rome with Love” will soon be forgotten by film goers; along with its immoral and worldly messages. I urge each and every one of you to read through Proverbs 6 (specifically verses 24-29).

“Flee from sexual immorality. Every other sin a person commits is outside the body, but the sexually immoral person sins against his own body” (1 Corinthians 6:18).

Neutral
Neutral—This is another quirky movie by Woody Allen. He plays one of the characters and is the persona we have seen so many times. There are four stories, not connected in any way at all. The action flits from one story to another. The only thing they have in common is the city of Rome. The cinematography is really beautiful and showcases the city and its people. From that standpoint, the movie works.

One of the stories also contains a very funny situation and the whole audience, including me, roared during those scenes. Morally, however, there is so much that goes contrary to Christian values and beliefs that I have to give this a neutral rating. I don’t want to give it a negative, because I did enjoy my hour or so looking at Rome and laughing at one particular theme. However, this movie may offend many Christians and probably won’t appeal to many.
My Ratings: Moral rating: Very Offensive / Moviemaking quality: 3

Halyna Barannik, age 66 (USA)
Movie Critics
“…extravagantly wastes the talents of Cruz, Alison Pill, and Greta Gerwig… Women in his films are now mere bystanders when they aren't basket-case man-eaters or Mediterranean whores, and along with a nearly incessant soundtrack of cheesy Italian la-la-la pop, and dialogue repeatedly undermining Darius Khondji's sun-dappled images by redundantly assuring us that Rome is ‘beautiful’…”

Bill Weber, Slant Magazine
“…one of Woody's weakest. … Woody Allen… gets a face full of linguini for his efforts on ‘To Rome With Love.’ At its worst squirm- and grimace-inducing, this is an ultra-upscale touristy spin through the Eternal City as if arranged by the concierge at the Excelsior Hotel. Rehashing gags and motifs familiar from previous Allen films, all of them better done the first time around…”

Todd McCarthy, The Hollywood Reporter
“…This pleasantly diverting, none-too-strenuous arthouse excursion feels like a throwback to Allen's short-story anthologies, with the added pleasure of seeing a game cast play along. … For all the red-blooded talk of philandering, the pic is remarkably chaste, and with the exception of one F-word (used as a verb), this could be the cleanest R-rated film in recent memory.”