The Woman in Black

for thematic material and violence/disturbing images. 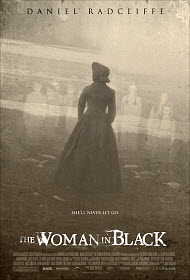 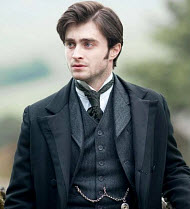 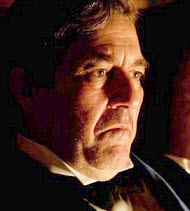 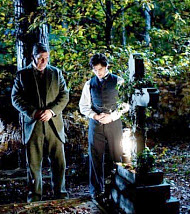 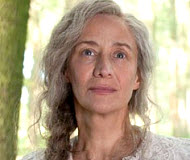 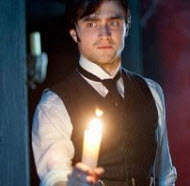 ghosts and the Bible

“She will NEVER let them go.”

“The Woman in Black” a period piece set in the late 1800s, opens with three little girls playing tea party in the attic, until they abruptly stop and slowly walk to the window where they all three jump to their deaths. This perplexing and alarming scene kicks off a nail-biting and tense scary movie. Arthur Kipps (Daniel Radcliffe) plays a widowed lawyer who lost his wife in childbirth and, after four years, is still grieving. He is assigned a job to settle an old estate in a distant town. His boss tells him this is his last chance of keeping his job, so he leaves his son to travel and settle the estate. When he arrives, he’s not welcomed by the locals; in fact, they give him no quarter and try to get him to leave, to no avail. Arthur soon learns why the townsfolk appear so mean.

When it comes to acting, this film is an anomaly; I think that almost anyone could have played the lead, because the story and art direction are so strong. With that being said, Radcliffe is satisfactory as Arthur Kipps, but I worry Harry Potter fans may not accept his character as the widowed father. The supporting cast is good enough to mention; they are believable, and I got caught up in the time period. The plot is slow, at first, but compelling. I wanted to know about the people, and that I credit that to good writing.

There is quite a bit of violent imagery and frightening scenes throughout. Not to ruin it, but they will make you jump and want to look away.

There is also some drinking—used as a coping mechanism.

Swearing is almost nonexistent (a single “h_ll”), which is unusual, however God’s name is taken in vain a few times (OMG, “Oh G_d” and “Oh for G_d’s sakes”).

This film deals with death, ghost possession and un-forgiveness, and brought a couple of verses to my mind:

“Then Christ would have had to suffer many times since the creation of the world. But now he has appeared once for all at the end of the ages to do away with sin by the sacrifice of himself. Just as man is destined to die once, and after that to face judgment” —Hebrews 9:26-27.

The Bible clearly says that the dead do not linger here on Earth, but they die once, then comes judgment.

When a person is wronged, it can be hard to forgive and even harder not to hold a grudge, but we must forgive others, because God forgave us, but the Way of His Son Jesus.

I enjoyed “The Woman in Black,” because it is a well done, scary movie. The story is very intriguing, with a Sleepy Hollow feel. I have to mention, it has the creepiest dolls I’ve ever seen, plus the last five minutes alone are worth the cost of admission.

Positive
Positive—What a scary film! If you like jumping out of your seat at the movies, this ones for you. It’s been a few weeks since I saw it, but it was such a great throwback to the old creaky door or shadow in the window thrillers. A step into the spiritual realm where a resentment hovered in the darkness. Great acting and filming, using lots of grays and blacks to keep you in the dark!
My Ratings: Moral rating: Average / Moviemaking quality: 4½

Lynn C. Stahlecker, age 58 (USA)
Positive—If you enjoy a dark mystery or ghost story with a bit of a thrill, I think you’ll enjoy this movie (maybe with a nice bag of popcorn). If you’re sensitive to such things, I assume you would choose a different movie. It has some usual faults of most thrillers… like people who inexplicably go towards the scary things, instead of away from them. In this case, the technique serves to increase the emotional involvement of the main character. The more he investigates the strange happenings, the more he starts to hope he can set things right.

As a photographer, I found some of the images to be striking and memorable. I was quite entertained, and my date and I left the theater still interested in the movie and discussing the story.
My Ratings: Moral rating: Average / Moviemaking quality: 4

Sunny, age 38 (USA)
Positive—…“Wow.” I was just amazed at how scary this movie was. I was looking for a movie with a good scare, and I picked the right choice. About 30 minutes into the movie, I knew this was going to be a phenomenal movie. Congratulations to the cast and crew of “The Woman in Black,” especially Daniel Radcliffe. Boy he’s come a long way since the Harry Potter films. Like I said, a great movie and one that I would definitely wish to see again.
My Ratings: Moral rating: Average / Moviemaking quality: 5

Alexander Malsan, age 22 (USA)
Negative
Negative—I usually love this kind of horror, but this movie was sickening and disturbing, due to the theme of a morbid grudge. I did appreciate the fact that, while they could have made it gory, they didn’t—so that’s a positive note. I also thought they did an exceptional job doing the dark ending in a happy way. The Edgar Allan Poe-style visuals and atmosphere were mastered, and, of course, Daniel Radcliffe’s acting was lovely.

Make no mistake, however, the moral problems greatly outweigh anything good. In fact, morally, there’s actually almost nothing to walk away with. Just the sight of the ghost forces people to commit suicide, so it’s not like demon possession. That’s a big problem already, but also, evil triumphs over good in the end. It will probably leave you with a bitter feeling. I’m not opposed to all fantasy, but this is one that I definitely do NOT recommend.
My Ratings: Moral rating: Very Offensive / Moviemaking quality: 3½

Gabriel Mohler, age 25 (USA)
Negative—Although this film contains good acting, excellent direction and a feel for the time period, I found it to be much too dark and foreboding with a message of hopelessness. The story purports a preoccupation with death, and the film’s final message is that evil and death triumph over goodness and life.

What also troubled me is that ***SPOILER*** the victims in this story are all innocent children, who are compelled by an evil presence to kill themselves. ***END SPOILER***

First of all, no force of evil, even Satan himself, can force a human being to commit an evil act. Free will is a gift from God, and the will must be complicit in order to do harm to oneself or others. The children are not at rest because of the way they died, and this is left unresolved at the end of the picture. The children are perpetual victims, very much like those who are aborted by the millions every year.

***SPOILER*** The Woman in Black is the mother who kills. Nothing will appease her and she wins in the end. ***END SPOILER*** This is a bad message to send to young people, who are already bombarded on a daily basis with violent images, messages of self indulgence as a way of life, and a cultural disregard for faith, charity and the meaning of family.

Christ triumphed over death at His Resurrection. He is the answer to all the suffering, woe, confusion and immorality that pervades our culture. “The Woman in Black” is the latest contribution to negate that salient truth. I do not recommend this film.
My Ratings: Moral rating: Offensive / Moviemaking quality: 4

M. G. Ragan, age 51 (USA)
Comments from young people
Positive—I felt that “The Woman In Black” was very well made, and the acting talent was spectacular. It was a suspense filled movie. It was a little slow at some parts, but it made up for it with it’s interesting premise. One thing to mention, it does not follow the Biblical version of afterlife. This is a good point to talk with your kids about what happens after we die. No one under 14-15 should see this movie, because it is quite scary. However, if you can take the scary, this is an excellent movie I would recommend.
My Ratings: Moral rating: Better than Average / Moviemaking quality: 5

Georgia, age 15 (USA)
Positive—“The Woman in Black” was a great movie, overall. There is no swearing at all in it, with the exception of the Lord’s name taken in vain a few times. I am very into horror movies, but it’s so hard to find a good, scary, PG-13 horror film. Although this is not the scariest movie I have ever seen, I think it’s a good movie for people that get scared fairly easily, but like to be scared. I think that if you’re looking for a horror film that has no sexual content, no cursing, no content for that matter, but yet still mildly scary, this is the movie for you. Of course, there is still violence, but what do you expect seeing a horror movie, and, honestly, every movie with a PG-13 rating or higher is for either violence or sexual content, and I would much rather see a violent movie than an inappropriate movie. I went to see this movie with my dad the second day it hit theaters, and, I must say, seeing it in theaters was much scarier than seeing it on an ordinary TV.

We left the theater pleased with the movie. Once it came out on DVD, me and my friend rented it, and he got so scared that he turned away half way through the movie, but he gets scared pretty easily. I think if you are looking for a horror movie with no inappropriate content, this is the movie. If you watch this movie, and you want something scarier, but still PG-13, I suggest “Insidious,” however that has more swearing and more inappropriate content.
My Ratings: Moral rating: Better than Average / Moviemaking quality: 5