for language and some bloody images. 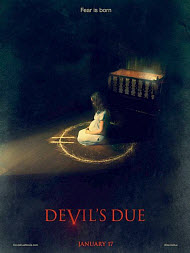 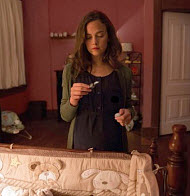 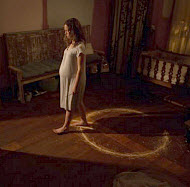 Satan and the Devil in the Bible

Have questions about pregnancy, the baby’s life before birth, Handy Pregnancy Calculator, and more. Visit this beautiful online presentation. Ask questions and get reliable answers.

There are some movies that there is only one good reason to watch: for the purpose of reviewing them. And as found footage horror becomes more and more popular, I felt God calling me to review this movie. I was tempted to do the Jonah thing. Just kidding.

In this film, Zach and Samantha “Sam” are on their honeymoon and get into a taxi being driven by a creepy guy who half-convinces, half-forces them to come watch part of an occult ritual. When they get home, Sam is shocked to find that she is pregnant way sooner than they had planned. From there, weird things start happening to her, and the psychological horror gets more and more unnerving. Eventually, the bloody violence kicks in. Too late, it becomes clear that something paranormal is inside her.

I think a good movie review should discuss the production quality, so I’ll touch on that briefly. The acting was amazing, the premise was somewhat original, and the horror effects were pretty well-done. Which makes it even more sad that the moral quality is so evil. The plot wasn’t exceptional, though. As for the cinematography, that depends on whether you like found footage. Some people can handle shaky cameras, and some can’t.

I had low expectations for the moral quality. Did I see what I expected? No… I got worse. I will say I was pleased to find that, unlike “Paranormal Activity,” the couple was at least married throughout most of the film. How sad that it’s refreshing to see that these days. However, even that didn’t exclude sexual immorality. At the beginning, on the night before the wedding, the groom-to-be sneaks into the girl’s house and enters the bathroom while she has a towel wrapped around herself. Then he says, “Tomorrow, we are officially a family; so tonight, I want to start our family history.” Self-explanatory. The wedding scene is next, which is like a sad joke, because they’re making vows to be pure, etc. After that, there are some revealing outfits, a woman in a bikini seen briefly but closely, and some shots of Sam’s pregnant belly. At one point, Sam mentions that she has consistently taken birth control pills.

One stop the couple makes on their honeymoon is to a fortune teller who makes ominous prophecies by looking at Sam’s hand. (Of course, predictably, the wife is scared, the husband thinks it’s all nonsense, and then—sort-of-spoiler—it comes true.) There are occult symbols seen throughout, as Sam becomes possessed. Some young kids do the walk-an-isle, officially-get-Jesus-in-your-heart ritual in a Roman Catholic church. In fact, one of the worst things about this movie is the spirituality. 1 John 2:18 is presented on the screen in the opening, and referenced later. But with all of the other spiritual perversion in this film, it’s clearly just there for thrill, and not meant to be taken reverently. This is perhaps the most offensive thing in the whole movie. Just because it references Scripture doesn’t make it good!

It’s not until the final third of the film that the violence starts to get really disturbing. Before that, the only scene that might fall in that category is when Sam is getting an injection at the hospital with a needle that has to go all the way into her belly. She screams with pain, and the needle is shown going in. Hard to watch, but not evil.

A car almost crashes Sam; she freaks out and breaks some of the windows. She suddenly grabs and swats people a few times; there are some startling nosebleeds. But in the last third, it gets more gory. Sam murders a friend, which is offscreen (you just see a door crashing and hear screaming), but, later, Zach finds the friend’s body covered with blood. Sam burns a hole in her belly and blood drips. This is in the dark, so you can’t see it too graphically, but it’s visible enough to be very disturbing. There are no guts or anything like that.

When the police show up at the house, they take the baby out of the hole she burned in her belly. The whole climax has much blood. Other than that, there are some frightening supernatural things throughout, such as people getting pulled into mid-air (and dropped on a car, in one instance), walls cracking, pictures flying off the wall—the usual haunted-house clichés.

Is there anything positive about this film? Well, Zach is very committed to Sam and wants to care for her and protect her. But if you want a film that illustrates a good marriage, “Fireproof” is right there for you. It would be virtually impossible to take out all of the offensive content from this movie, as much of it is key to the plot. But even if you could, it would be a complete and total waste of time. There would be no benefit. And as it is, it is indeed very spiritually harmful.

“The Exorcist” was a disturbing movie and had some inappropriate things, but at least God won over the Devil in the end. Not so with the “The Devil’s Due.” Evil triumphs. And due to the gore, perversions of Christianity, and equally bad language, this movie is even more offensive than “Paranormal Activity” in most ways. As I always do after reviewing bad horror movies, I recommend “The Conjuring” as an alternative, which has very refreshing moral quality and is a must-see for anyone who has strong nerves. If “The Devil’s Due” is your only movie option, you just shouldn’t watch anything. Please stay far away from this movie. You’ll be glad you did, and so will God.

Positive—This movie… . It was my second date with my girlfriend, I didn’t watch the trailers, I just tossed a few movies at her and let her choose one… This was the one she chose. If I’d known it was a found footage horror movie, I’d never have suggested it. HATE that kind of horror. Love horror, but I can’t take a shaky camera… Makes me sick.

They did have a good idea… But the way they went about it was REALLY weird, and I felt like a 15 year old who’d just started writing class wrote it and the director stole it off his desk, made a few changes and made it into a movie. I didn’t think it flowed well at all. It felt really choppy, cheap and… Bleagh… Forget scary, it was hardly suspenseful.

There was no actual reason behind anything that happened, and the only time I jumped was at the loud sound a chair made when it smashed into the wall. Even the ending s*cked… They left it open for a sequel, I dread the day that happens.

As for offensive content, there wasn’t much… Maybe 10 F-words along with a smattering of other lesser curses… There was one scene where the wife is seen through a (Very blurry) camera naked and throwing her towel onto the bed, but all you can see is just a human colored blur.

My final opinion… … It’s going straight from the theaters to Netflix… It’s one of those movies… . If you’ve got Netflix, wait for it there. Don’t bother going to see it or renting it at Redbox. Even $1.20 for a Redbox rental is a rip-off for this movie… If you’re going to see a movie, I suggest you completely skip over this one, it’s not worth the money.
My Ratings: Moral rating: Average / Moviemaking quality: 3

Fyzix, age 18 (USA)
Movie Critics
…This latest exercise in found-footage horror is less scary than the prospect of watching a friend's home movies. …

Frank Scheck, The Hollywood Reporter
…brings nothing new to the birthing table except the already tiresome found-footage contrivance… a dispiriting lack of originality…

Mark Kermode, The Observer
…Less entertaining than it sounds…

Rafer Guzmán, Long Island Newsday
…Both leads show as much promise as they possibly can in the circumstances. The movie otherwise oscillates between the jolting and the absurd, bottoming out with a nonsensical coda implying multiple Antichrists. …

Tim Robey, The Telegraph [UK]
…delivers the bloody, misbegotten offspring of cannibalized Christianity, Satan worship and devil-spawn mumbo-jumbo. … There's no redemption in the end, and no hope. …