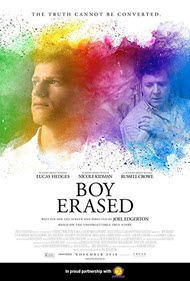 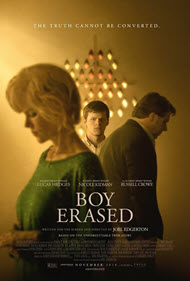 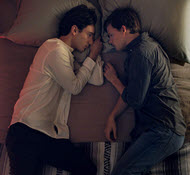 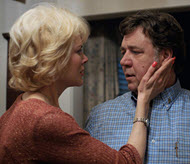 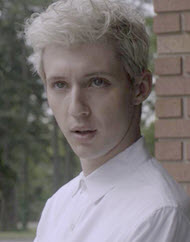 GAY—What’s wrong with being Gay? Answer
Homosexual behavior versus the Bible: Are people born Gay? Does homosexuality harm anyone? Is it anyone’s business? Are homosexual and heterosexual relationships equally valid?

What about Gays needs to change? Answer
It may not be what you think. 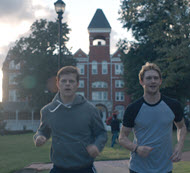 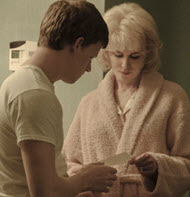 This movie is adapted (with some added material) from the provocative memoir by Garrard Conley titled Boy Erased: A Memoir of Identity, Faith, and Family (2016).

This film’s marketing tagline is: “The truth cannot be converted.”

Film description from Wikipedia and iMDb:
“Jared Eamons (Lucas Hedges) is the son of Marshall Eamons (Russell Crowe), a successful car dealer and Baptist preacher, and Nancy Eamons (Nicole Kidman), a self-styled hairdresser. The film begins with Jared entering into his first day at the Love In Action gay conversion therapy program. Chief therapist Victor Sykes (Joel Edgerton) tells the group that their sexuality is a choice influenced by poor parenting. He instructs them to perform harsh ‘moral inventories’ of themselves and their families and requires them not to tell anyone else of what occurs in the sessions.

Nancy rents a nearby motel for her and Jared to stay in until he completes the program; however, Jared soon discovers that the therapy has no set end point and may require him to move into an on-campus home if he fails to convince Sykes that he has become straight.

Flashbacks reveal how Jared became enrolled in the program. Jared leads a well-adjusted and happy life through high school, though he breaks up with his girlfriend upon starting college. Once there, he becomes friends with another student, Henry (Joe Alwyn), and has a brief intimate encounter with an art student, Xavier (Théodore Pellerin).

While staying the night in Jared’s dorm, Henry rapes Jared and tearfully confesses that he has done the same to another young man. Traumatized, Jared returns home to recover. Henry calls the Eamons” home and poses as a school counselor in order to out Jared and ensure his silence. Jared confesses to being attracted to men. After consulting with other pastors, Marshall signs him up for conversion therapy, to which Jared reluctantly agrees.

Weeks into his therapy, Jared gets to know the other attendees also seeking to become straight. Some, like Jon (Xavier Dolan), are fanatically devoted to conversion to the point where they refuse to even touch other men. Others, like Gary (Troye Sivan), are merely ‘playing the part,’ pretending that the therapy is working until they can be released and return to a normal life.

At her insistence, Jared lets Nancy read the program’s handbook, which is full of questionable psychology and obvious grammatical errors. After failing an exercise, attendee Cameron (Britton Sear) is humiliated by Sykes in front of the group and intimidated with a fake funeral service. Cameron is then beaten with Bibles by both the therapists and his own family and forcibly dunked in a bathtub in one of the program’s prison-like homes.

Jared challenges Sykes when the latter suggests during an exercise that Jared hates his father. He storms out of the room, successfully retrieves his phone, and calls Nancy to pick him up. Nancy removes Jared from the program and takes him home, horrified and ashamed that she allowed Marshall to enroll him in an unvetted program without researching its practices. Marshall remains furious about Jared dropping out of the program and refuses to speak with him. Soon after, Jared learns that Cameron committed suicide while still in the program’s care.

Four years later, Jared has moved to New York. He writes an article that exposes the realities of conversion therapy. Jared returns home to convince his father to read the article and take accountability for his actions. The two begin to reconcile.

An epilogue states that the leaders of many conversion therapy groups were fired in the wake of Jared’s memoir, although many therapy groups still remain active. Jared remains active for LGBTQ causes and is reconciled with his parents, while Sykes stepped down from Love In Action and married a man himself.”

…“Boy Erased” suggests sexual desire can’t change, so religion must…
Brett McCracken, The Gospel Coalition (entire review—off-site)
“Boy Erased” film misrepresents sexual orientation counseling…
Peter Sprigg
“Boy Erased” foments anti-Christian bigotry… what this film sets up is a heart-tugging straw man. But such blatant deception should be “erased,” because it will potentially mislead millions of people. …
Linda Harvey, WND
…As war rages over the rightness or wrongness of homosexuality, rules of fairness and accuracy are suspended in lieu of victory at any cost. Thereby, advocates for a world in which no one objects to homosexuality have cleverly created a boogeyman and named it Conversion Therapy. “Boy Erased” tells us this is what the boogeyman looks like, that all people offering counsel or ministry from a traditional biblical position are doing what the boogeyman in the movie does, therefore all of “them” must be stopped. …
Joe Dallas, Genesis Counseling (see entire review and “Man Engraved: A Response to Boy Erased” —both off-site)
Comments from non-viewers
Negative—One word: NOPE.