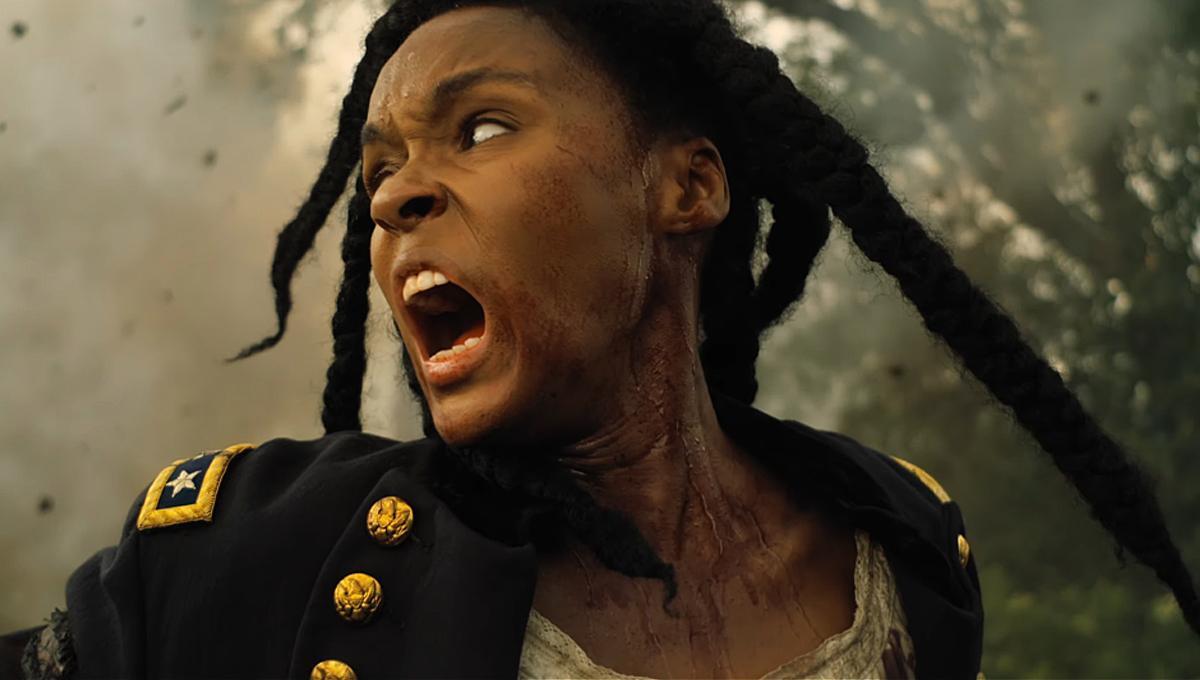 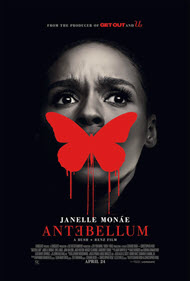 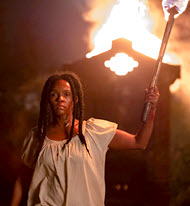 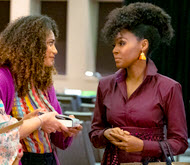 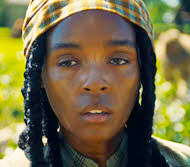 Heavy-handed social commentary and activism in many recent theatrical movies

Patriarchy as described by modern Leftists and Feminists 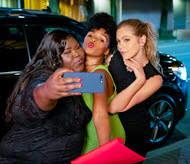 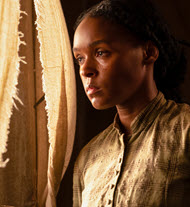 Eden, an African American slave, has been trapped on a plantation in Antebellum Louisiana for quite some time. The plantation work is grueling day in and day out. The abuse, however, is far worse; and when she and the workers aren’t being abused, both physically and mentally, those that have outlived their purpose are sent to the hut and burned to death. Sure, Eden and the other workers, including her friend Julia, have attempted a couple times to escape the plantation, but each time has resulted in their recapture and, of course, abuse.

Her co-workers come to her one last time asking, “When Eden? When?” Eden says, “Not yet.” In secret, Eden continues to learn the mistakes of her past. Her co-workers return. “When?” they ask. “Not yet,” Eden states. Julia screams at Eden claiming that Eden is afraid to escape and will forever be subjugated to the rule of the slave owners. Is patience really cowardice though?

The following night Eden whistles for the male co-worker. The time… is… now. The rest? Well, the rest you’d have to see for yourself.

The transitions between the scenes that involve Eden and Veronica (both played by Janelle Monáe) are so disjointed that at times the pieces don’t quite add up. While viewing, I thought, “Wait, how does that connect with that scene?” or “Wait, how does this happen and X, Y, and Z not occur in the process?” Oh and that twist that keeps getting advertised on Facebook? It’s not a major twist, and viewers will figure it out pretty quickly, I assure you, but I won’t be the one to reveal it.

The simplest way to describe “Antebellum” is: it’s in your face and all over the place. It mostly serves as a revolutionary Progressive Liberal propaganda statement from Hollywood, that promotes the following worldview: 1) white privilege is rearing its ugly head (as depicted through the use of the haughty nature of the white male and female characters of the South. For example, one male character has a scene in which viewers are led to assume he is a decent human being, but it turns out he certainly is not, and that 2) the inequality between white people and African-Americans has not improved in the slightest since pre-Civil War days. For example, there is but one white female character in the entire film who is a true genuine friend to African-American female character Vanessa. Every other white person who interacts with an African-American makes nasty looks at them and/or demeans them intentionally or unintentionally. One white waitress purposely seats three African-American females in a corner table away from the rest of the other restaurant patrons. And it gets much worse. The movie’s political messaging and propaganda is so constant that it is impossible NOT to notice.

“Antebellum” is produced by the same group who wrote the film “Get Out,” which I also reviewed. Do these type of films need to exist? Did they exist decades and decades ago? Some did, yes, but not the abundance of them that do now. Most films mainly existed to entertain, not preach! But director Gerald Bush is clear about his goal,

“I am super Black and grounded in my culture and heritage and the pride of that. I think that some of the wisdom that I’ve imparted to my partner in terms of what that experience is to be a Black person; part of that was my absolute disdain for ‘Gone With the Wind.’ I thought it was a horror film and I thought that it was a slap in the face to Black people, completely inaccurate and a piece of beautiful propaganda. We wanted to make something that showed the same story in a very different prism.”

Speaking further of “Gone With the Wind,” a reporter noted,

“He [Bush] was so incensed by the 1939 film that he hunted down the lenses used to shoot it ‘and rebuilt our cameras to shoot Antebellum with the same lenses that were used to shoot ‘Gone With the Wind’.”

Gerard Bush went on to state his activist agenda for “Antebellum,”

“Our intention for the film is to serve as a prescription, a medicine, a catharsis. It’s really important that we get to a place in this country where we have the courage and the determination to confront our past, specifically this country’s original sin… And very possibly seeing our shared future robbed of all of us. I think our hope is that it activates people into action.” “…with Antebellum, we wanted to focus on the monsters that actually live among us now.”

Violence: Heavy to Very Heavy. A character is roped then shot and executed off screen. A woman is whipped on a table. This same woman is later branded with a hot iron on her backside (we hear her scream). We see a woman being whipped with a belt. Male and female African-American characters are seen throughout the film being slapped, spit on, hit, or mistreated multiple times. One character even commits suicide by hanging themself (we don’t see the action, just the aftermath). A man is choked to death. A man is stabbed with a sword. People are burned in a smoke stack (we hear them scream). A woman is choked, dragged by a horse on a rope and her head hits a wall, killing her. A woman sets buildings on fire. A Civil War battle reenactment is seen occurring. A pregnant woman is kicked in the stomach and suffers a miscarriage. A man is killed with a hatchet.

Sexual Content/Dialog: White soldies are told that Black women are here to fill your every need whatever they may be. Women are raped. A girl becomes pregnant. A girl is told to leave the forest by an owner to prepare herself for a night with the corporal in the cabin. Eden is sexually abused by her slave owner, and he is shown forcing sex on her. Veronica wears a short bra and panties underneath her night clothing. Some sexual dialog occurs between Veronica and her co-workers at a dinner party. Veronica’s husband asks in a text if her breasts are on display.

I found the underlying theme of strength in the main character Eden. She endures so much sacrifice, so much pain and so much risk that it requires a great deal of strength to continue on to learn how to successfully escape the plantation and attempt to regain the life they lost before they were enslaved.

Strength is something we all rely on. When we reach our darkest hours, when we feel physically, mentally and perhaps spiritually drained, where does our strength come from? If we are Christians, it comes from our Lord Jesus. I know myself, as I was returning home this evening, talking to the Lord, I prayed for strength, telling Him my body has grown weary from certain issues, and that only HE can provide the necessary strength and peace that passes all understanding.

“God is our refuge and strength, an ever-present help in trouble. Therefore we will not fear, though the earth give way and the mountains fall into the heart of the sea, though its waters roar and foam and the mountains quake with their surging.” —Psalm 46: 1-3

“My flesh and my heart may fail, but God is the strength of my heart and my portion forever.” —Psalm 73: 26

“But those who hope in the Lord will renew their strength. They will soar on wings like eagles; they will run and not grow weary, they will walk and not be faint.” —Isaiah 40:31

Overly-political, disorganized and at times offensive, “Antebellum” will be one of those films that most viewers will likely look back at and say, “That needed a rewrite.” With abundant violence, vulgarity and sexual dialog, this film certainly is not for children. I strongly recommend moviegoers skip this film. You can do much better.

Editor’s Note: Activist filmmakers Gerard Bush and Christopher Renz (a Gay interracial couple) are best known for their work in high-budget marketing of “social justice” politics in the wake of the death of Trayvon Martin. They wrote, produced and directed “Antebellum,” teaming with QC Entertainment, producer of the films ‘Get Out’ and ‘BlacKKKlansman’. Gerard Bush got the idea from a nightmare he had.

“I’ve never thought of myself as a New Age person, but this felt really up close and intimate, it felt ancestral. I’m categorizing it as a nightmare because I was asleep and I was in a dream state, but it felt like I was receiving. The star of the dream was this woman, Eden. And she was so desperate to reach help and to escape her tormentor that it felt like she was screaming across dimensions. …The nightmare was essentially ‘Antebellum’… Most of the details that you see in the movie are from the nightmare.”

Secular Movie Critics
…While Antebellum is dazzling to the eyes, it also leaves an icky taste in your mouth in its leering, exploitative depiction of violent, slavery movie tropes. … [1½]
Christy Lemire, RogerEbert.com
…it treats systemic racism as a kind of contagion that refuses to die, eating the brains of successive generations. …
Peter Debruge, Variety
…a smug and dishonest genre exercise… more groan-inducing than anything else… I don’t need to see any more slave narratives. I can’t (and don’t) speak for all Black people, of course, but I personally am exhausted of seeing this same historical trauma continually played as entertainment. … [2/4]
Sarah Tai-Black, The Globe and Mail
…grotesque wallowing and jangly script… exploitative… falsely equates shock value with empathy… its needless brutality, ropy character work, and misguided twist make it easily 2020’s worst movie so far.
Robert Daniels, Polygon
…the result is shallow, more interested in making a Big Point than digging meaningfully into its subject. …the film is mostly visually flat. In the end, Antebellum is undone by a lack of empathy and emotion. It has no real perspective on the past and thus fails to make any real impact on the present.
Jourdain Searles, The Hollywood Reporter
…that three act structure makes for a grim, distressing and lumbering opening, a tense and bloody finale and a middle act—the one set in the modern day that “explains” what’s going on—that is as straight-up hackwork, a Tyler Perry fashion show meant to add dread but where rolling one’s eyes is the only proper response. … [2/4]
Roger Moore, Movie Nation
…without a solid story foundation for its general concept, Antebellum leaves one massive question at the end: What did I just watch? …
Tai Gooden, Nerdist
…a woeful misfire…
Richard Whittaker, Austin Chronicle
…mishandles its sensitive & painful subject matter on multiple levels…
Siddhant Adlakha, IGN