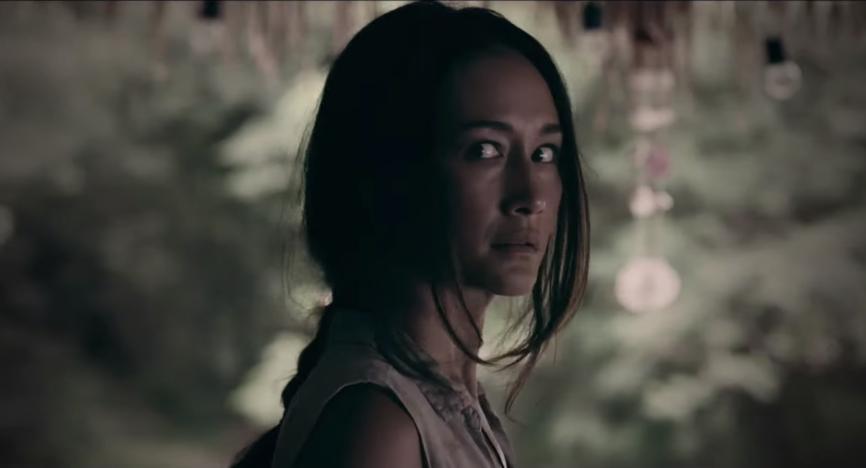 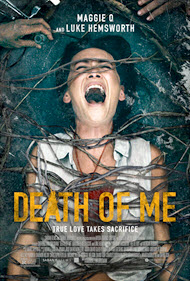 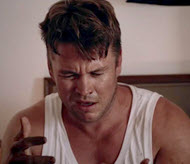 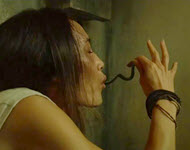 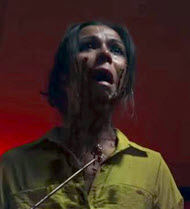 Neil (Luke Hemsworth) and his wife Christine (Maggie Q) have been having the time of their lives together vacationing on a small island off the coast of Thailand. The locals are friendly, the island is beautiful and the food is absolutely delicious. Why would anyone want to leave such an amazing place? Unfortunately, Neil and Christine’s time on the island is almost at an end.

As Neil and Christine approach the dock to the ferry to head to the mainland, they notice they’re missing something—their passports and IDs. “Okay, relax. Let’s just try and figure out what happened last night. Maybe we took some pictures or something that can help us retrace our steps,” thinks Neil. Good thinking, or maybe not…

While searching through his pictures, Neil and Christine discover a video of the past night’s events with Neil and Christine drinking, but then at one point, Christine’s drink is being spiked by the waitress. Wait, what? Then at a later point in the night, Neil is seen strangling Christine to death (don’t worry, these aren’t spoilers by the way). “Hold on, how is this possible? I’m alive and right here,” Christine asks herself.

Hysteria, spiritualism and quite a bit of mystery abound in this tale that reminds us that beauty sometimes is only on the outside.

I might as well come right out and address the overwhelming issue of the film right at the start: the continual, prominent display and use of occultic and spiritualistic practices featured throughout the film. Everything from statues of Buddha, to pendants, to charms, to chants; nothing is left out of this film. The images and sounds are absolutely vile and detestable. Even I could not withstand the content, and I’ve been doing these reviews for a long time.

Now, to the film’s credit, the performances by the film’s main stars, Maggie Q and Luke Hemsworth, are relatively strong. Even in the scenes where Luke Hemsworth’s character, Neil, isn’t present, I could tell Maggie Q is still a force to be reckoned with as an actress and continues to make a name for herself in Hollywood. The overall cinematography and development of the plot is fairly straightforward and clear as well.

However, NONE of that matters when weighed in comparison to the level of occultism that exists in “The Death of Me.” I miss the days when horror and thriller films could rise to the occasion without the unnecessary amount of blatant ungodly content, occultism, satanism and the like. The classic horror films were just meant to scare the old fashioned way; the “who’s-around-the-corner approach” or through the use of clever tricks or music, but I digress.

Please note that this is not the full list of content. This is only a partial list and that some of it is graphic in nature, particularly the violence.

Violence: Murder by strangulation and neck-breaking. Injection into a woman’s eye during a ritual. Abduction of a woman. A man graphically cuts out his own intestines and falls into the waters (we see his entire intestines come out of him) as he dies. A woman slashes her face with a spear (off screen), and then graphically stabs her chest with a spear. A person is shot through the temple while driving. A woman is knocked out. A woman has her eye sewn shut as we watch. Kids with mouths and eyes taped shut. A woman attacks some islanders. A character is killed. We see dead bodies after a disaster. A fish is graphically cut open. Reference to human sacrifice of a pregnant woman. Etc.

Nudity: A woman wakes up in her bras and panties. Woman in bikini. Cleavage. Shirtless male.

Sexual Content/Dialog: Heavy. Man and wife share a few kisses. “Did you get a good look Neil?” Husband and wife have somewhat graphic, clothed sex in yard that leads to him choking her and murdering her. A woman removes Christine’s shorts while holding her down and does

Drugs/Alcohol: Woman’s drink is drugged, and she passes out. There are various other scenes involving alcohol.

Occult: Very Heavy to Extreme. A dreamcatcher is placed on someone’s lawn. There are Buddhist statues placed throughout the island. There is a festival parade in which there are children and adults that wear these horrific skeleton-like masks. Buddhist symbolism is prevalent. Ritualistic practices are all over the place including the talk of sacrifice and teetering existence between life and death (not being alive and not being dead). There are two occult-based rituals that take place.

There is nothing morally redeeming I can draw from this film.

Immediately after watching this film, all I could think was, “What was the Holy Spirit just subjected to?” I sincerely implore you, please, heed my advice and avoid this film at all costs. There are so many other films that are available to stream on your smart device right now that would be much more worth your time, some that will even strengthen and help you grow in your relationship with the Lord. This is NOT one of those films. Stay far away “The Death of Me”!

Secular Movie Critics
…The plot did not have to be sacrificed for a carnage quota. Psychological terror is just as effective. …
Julian Roman, Movieweb
…so convoluted that I wasn’t sure where relevance began and deflection ended. … [D+]
Jared Mobarak, The Film Stage
…The confusion between reality and hallucination absolutely butchers the film’s forward momentum. … [1½/4]
Roger Moore, Movie Nation
…a dubious horror exercise… grisly B-film, which mixes effective scares with dated cultural othering…
Guy Lodge, Variety
…I was highly disappointed with what was delivered. The film seems to be a regurgitation of the typical “tourist-trip-gone-wrong” combined with all the bad clichés that we dismiss in horror flicks. …
Matthew Kistner, Review St. Louis
…any reasonable point or compelling genre fun is lost amongst the messy narrative structure, wooden acting, predictability, and appropriating Thailand for generic cult purposes… [2/5]
Robert Kojder, Flickering Myth
…a meandering and uninteresting series of events with overblown music, one good performance and a terrible ending that leads audiences wondering what was the point of any of it. [3½/10]
Grant Hermanns, Coming Soon