The One and Only Ivan

Reviewed by: Will Leavens
CONTRIBUTOR 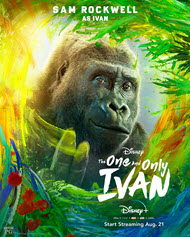 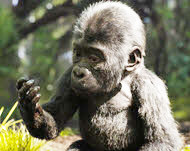 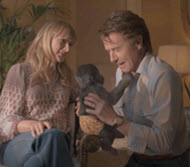 The movie and book are based on the life of an actual Western Lowland Gorilla named Ivan. The real Ivan did live at the B&I Amusement Center mall in Tacoma, Washington (USA) for 27 years after being a pet for six years. When protests ceased, the animals on display at the amusement center, Ivan went to live at Zoo Atlanta where he had a much different life. 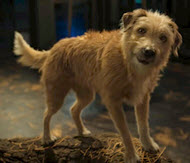 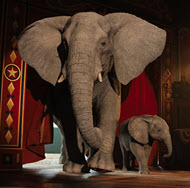 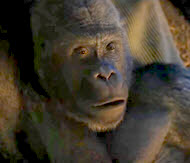 This film is based on Katherine Applegate’s bestselling book of the same title.

In “The One and Only Ivan,” a family film inspired by a true story, Ivan (voice of Sam Rockwell) is a silverback gorilla living inside a circus tent at the Exit 8 Big Top Mall and Video Arcade with friends Stella the elephant (voice of Angelina Jolie), sarcastic stray dog Bob (voice of Danny DeVito), and several other animals. The circus is run by down-on-his-luck Mack (Bryan Cranston), desperate to sell tickets to the show and willing to do almost anything to succeed. In order to boost sales, Mack purchases Ruby (voice of Brooklynn Prince), a baby elephant from a bankrupt circus.

Ivan and Ruby become fast friends and just when it seems like the show will again be a success, Ivan promises to free Ruby from the circus. Ivan, with the help of Bob, hatches an escape plan. But the animals realize that escaping is going to be a lot harder than they thought. Ivan is determined to break free using a new skill discovered by Julia (Ariana Greenblatt), the young daughter of a circus employee, to communicate his desire. If he can get back to the wild, he and his friends can live the rest of their lives the way they were meant to be lived.

One of the movie’s positive messages is to accept others and see them for who they really are. The animals say several times throughout the movie, “Not all humans are bad,” a message proven throughout the film.

“Wherefore receive ye one another, as Christ also received us to the glory of God.” —Romans 15:7

A key lesson expressed in the movie is that of keeping a promise and following through on your word. One promise shapes the future of the story, and if Ivan hadn’t followed through on his promise, this story never would have been told.

“If a man vow a vow unto the Lord, or swear an oath to bind his soul with a bond; he shall not break his word, he shall do according to all that proceedeth out of his mouth.” —Numbers 30:2

The main characters are driven by teamwork and bonds that show true friendship. Their relationship stands the test of time and obstacles, and, even when things get tough, the animals always stay together.

“Two are better than one; because they have a good reward for their labour.” —Ecclesiastes 4:9

There’s a message of perseverance, too. The movie shows that just when it seems you can’t be free, you find a way. The animals continue to stay strong, even when they’re locked in cages.

“If thou shalt do this thing, and God command thee so, then thou shalt be able to endure, and all this people shall also go to their place in peace.” —Exodus 18:23

The film shows that creativity and art can be a powerful way to express yourself. Ivan often communicates his feelings through paintings and drawings and uses creativity to show important thoughts and wishes. Art helps him live a bright future.

This film also offers a message of redemption. Mack, who starts out self-serving and focused on money over the well-being of the animals, eventually turns around and ends up empathizing with them.

“In whom we have redemption through his blood, even the forgiveness of sins” —Colossians 1:14

The movie contains a reference to an animal being “up there” while an animal looks up at the sky. This, although a minor part of the movie, is refreshing to see. It’s pleasing that Disney swapped blasphemy for seemingly acknowledging Heaven.

Violence: Unlike many family-targeted movies, this one doesn’t have prolonged action, fight or chase scenes, though it does have a couple of brief but upsetting scenes of death and violence. ***SPOILER ALERT*** In an emotional scene, an animal gets sick and passes away. The scene is not at all graphic and is fairly brief, although it is sad and would likely be upsetting to young or sensitive viewers. ***END SPOILER***

In a short flashback scene, we hear a gunshot; it’s strongly implied an animal was shot and killed, although we see nothing of the sort. While that’s the only truly upsetting or violent content, milder instances include: a gorilla roaring intensely several times, a dog telling a depressing but brief story about being abandoned and almost drowning (no danger shown), an animal almost getting run over by a car, and the circus owner making a veiled threat to a bird, “Do the words ‘bird for sale’ mean anything to you?” These instances don’t feel gratuitous and are a welcome change from the usual car chases and evil villains we see in most kids” movies.

Profane language: Christians just don’t know what to expect from “Family” movies these days, but this one mostly avoids profane language. There are no direct uses of the Lord’s name in vain, just one use of “holy moly.”

Sex: Innuendo is limited to a male rabbit saying, “I was hoping for a lady bunny,” when Ruby, the baby elephant arrives. A reporter wears a short skirt.

Other: A dog passes gas. A gorilla blows a raspberry twice. An elephant angrily sprays slobber on a man.

Caution should always be used when picking a movie for your family, but I’m happy to report that “The One and Only Ivan” is one of the cleaner family movies in recent years. For families looking to watch something wholesome and heartwarming together, it’s a solid pick with positive messages aplenty. I wouldn’t recommend it to families with sensitive kids, as the violent/disturbing scenes would likely upset them, but it isn’t blasphemous, crude, or unnecessarily violent. Overall, “The One and Only Ivan” is a decent, family-friendly film.

Positive
Positive—After watching this movie, I feel all warm and fuzzy inside. It’s like Dumbo meets the Greatest Showman, except it’s as gentle as Winnie the Pooh. This is a slow movie with a lot of deeper meaning that adults will enjoy, but it’s just interesting and funny enough to hold a child’s attention.

Each character is memorable and important to the storyline. My 11-year-old son is so used to fast-paced, action-packed movies like Iron Man or Captain America, and even cartoons that break up the monotony with a song like Aladdin, Toy Story, or Cars. This movie is like none of those movies. At first, he said he didn’t really like it, , and he almost stopped watching it, but then he couldn’t bring himself to stop.

Your child’s sensitivity level and maturity level should determine whether or not you watch it together or allow them to watch it alone. There is some loss of life and friendship connections, but it’s all dealt with in a gentle, satisfying way. I definitely recommend this movie!
My Ratings: Moral rating: Better than Average / Moviemaking quality: 4