for action/peril and some mild thematic elements. 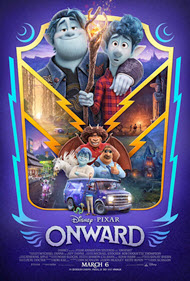 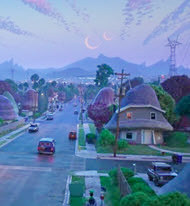 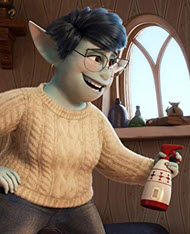 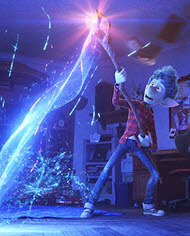 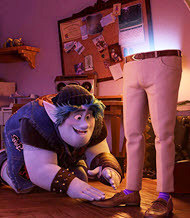 Fantasy world of elves, other mystical creatures and magic set in a suburban and urban setting

A fairytale world where its “magic” is being replaced with science-created solutions, such as modern machines, cellphones, and cars

Fictitious “magic” in fantasy stories compared to the type of pagan and demonic magic, witchcraft, sorcerers and enchantments that are condemned in the Bible 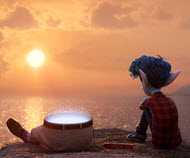 Importance of encouraging others

Stepping out in faith

Importance of truth and honesty / the sin of lying 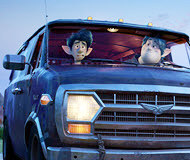 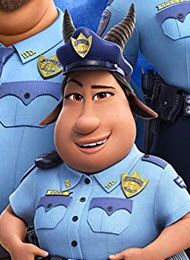 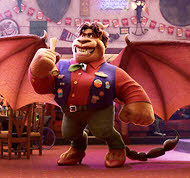 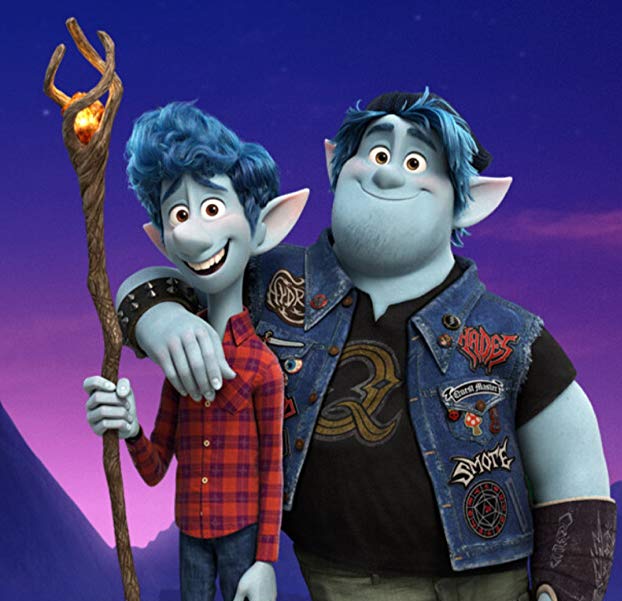 All his life, Ian (voice of Tom Holland) had wanted to get to know his Dad. Unfortunately, his father passed right before his birth due to illness. On Ian’s 16th birthday, his mother (voice of Julia Louis-Dreyfus) reveals that his Father left him and his brother Barley (voice of Chris Pratt) a gift that they could not use until they both were at least 16 years of age.

The gift turns out to be a wizard staff, with instructions that gives the brothers the ability to bring their Dad back for 24 hours. Unfortunately, the spell goes wrong and only brings back his lower half. Using Barley’s knowledge of quests and folklore, the two brothers set out on a quest to bring the rest of their father back before it’s too late.

“Onward” might be the most enthusiastic movie Pixar has made. Coming off of the lighter, more comedic vibe of “Monsters University,” director Dan Scanlon brings a sense of positive energy to this film that is pretty irresistible, and it almost never fails to entertain. There’s a great sense of humor to the film, including a handful of moments that had the audience in hysterics.

At the same time, “Onward” doesn’t lose track of its emotional core story. Inspired by Scanlon’s childhood (he lost his father when he was one), this is a story filled with mixed emotions and some very strong character development. The focus of the film seems to be more on Ian and his growing confidence, though Barley’s humbling and opening of his heart plays a solid role here too. The film also gives solid character arcs to the boys’ mother, Laurel, and an interesting manticore (voiced by Octavia Spencer).

Holland, Pratt, Spencer and Louis-Dreyfus are terrific in their voice roles. Holland and Pratt prove to be a perfect pair to play brothers, as they carry the banter that you’d expect. Louis-Dreyfus is loving, kind and relatable as the mother, while Spencer steals every scene her character’s in.

Michael and Jeff Danna give their best score yet here, with plenty appropriate strong and soft moments. The animation is also very strong, with a mix of whimsical and cartoony characters, unique special effects, and a few realistic backgrounds.

On the downside, the film’s enthusiasm and energy can get a little overwhelming or over the top in a few places. And there’s a few throwaway moments here and there that weren’t needed (more information on that below…).

First, “Onward” stresses the traits of self-confidence and bravery. Ian is someone who doesn’t think of himself highly and fears everything. Throughout the film, however, he comes out of his shell, takes a few risks, and eventually sees himself in a better light. It is known that the Bible says to “do not fear” 365 different times. We also notice how encouragement affects Ian going forward, reflecting the words of Proverbs 12.

“An anxious heart weighs a man down, but a kind word cheers him up.” —Proverbs 12:25

The film also stresses the importance of familial and brotherly love. Ian comes to notice as the film progresses that he wouldn’t be where he is without his brother. In spite of his problems, Barley clearly loves and looks out for Ian. And the film suggests that unconditional love isn’t just found through a parent. It can be found through siblings, older examples, or friends (the kind of love that John 15:13 encourages). For believers, we know unconditional love is found through Jesus first.

In addition to that, Laurel is a terrific mom. She loves, encourages and sacrifices herself for them. Her current boyfriend also shows concern for the boys. Truth and honesty are shown to be very important in one particular scene. There’s a nod to the moral of “walking by faith, and not by sight” (2 Corinthians 5:7). Finally, the film also implies the negative, restraining effects that modernization and technology have on people and relationships with others.

Adult Content: Laurel kisses her boyfriend (to her sons’ apparent dread). One romantic ringtone is heard on her phone.

NOTE: “Onward” has received some controversy for featuring Pixar’s first “LGBT character”. Very brief evidence for this occurs when a female police officer says, “I get it, you’re a new parent! My girlfriend’s daughter has been pulling my hair out!” That’s it. The point is never talked about again, and we only see the officer in the background doing her job at one point later in the film. It’s a moment that might be missed or forgotten by many kids and some adults in the audience. But, it certainly wasn’t necessary, and is yet another sign of the Mouse House embracing politically-correct (but Biblically-incorrect) ideas.

Violence: “Onward” includes some action scenes, but none that I would say are incredibly intense. There’s a villainous dragon at the end (magically put together by building rubble and can breathe fire), but even that didn’t elicit scares or crying for any of the smaller kids in the screening I attended. A “curse crusher” sword is slashed through the dragon to destroy it. Ian maneuvers through traffic, and he and Barley cause a little bit of slapstick mayhem in a few places. The Manticore breathes fire on a character mask and ransacks her tavern in a rampage. A biker gang of pixies smashes a window and a glass bottle against a sidewalk. They attack Barley and Ian during a chase scene. Barley and Ian’s dad (well, his lower half) gets into some slapstick situations of his own. A van crashes twice. Ian walks dangerously over an invisible bridge spanning a bottomless chasm.

Other: The film’s use of magic could be concerning for some. It is revealed early on that magic was encouraged to be used to help others, and that it isn’t wielded by everyone. Spells for floating, flight and summoning lightning are used. A similar spell (using a magical gem) attempts to bring someone back to life for 24 hours (but fails). A curse is mentioned a few times (and is shown later on in the form of red smoke and a dragon).

Elsewhere, Barley is shown to have committed some parking violations (we see a glove compartment full of tickets). He also isn’t thought of as a very intelligent person by some. An energy drink causes someone to go berserk. Biker pixies are shown to be quite mean to others. The concept of a character’s parent’s death and possible return to life might prove to be a difficult one for younger and sensitive kids. We hear brief details about the father’s illness, and that Barley was “too afraid” to say goodbye due to him being “unrecognizable” and having “too many tubes on him.”

Overall, “Onward” is a refreshing change of pace for Pixar. In the 2010’s decade, over half of the movies they released were sequels. There was the occasional original story like “Inside Out” or “Coco,” but their main focus of recent memory was to create follow-ups to fan favorites such as “The Incredibles,” “Finding Nemo” and even a fourth “Toy Story”. In a time when originality seems to be a huge risk for Hollywood, to see Pixar return its focus on original storytelling (at least for the immediate future) is very nice to see.

And with stories like “Onward,” it shows originality is very alive and kicking in Tinseltown. Pixar creates a near-perfect storm of emotion, humor, enthusiasm, and wit with this particular tale. And while the overall story might not be the most complex or layered one they’ve created, that’s not exactly a huge problem. Because the characters are memorable, the jokes are terrific, the twists are very well-executed, the ending jerks at the heartstrings, and the animation is great.

That being said, despite strong production values and messages, “Onward” is far from the best choice for families. Magic (fantasy magic) plays a big role here. And even though it’s utilized primarily in beneficial (instead of harmful) situations, its use alone may push it out of bounds for some believers and families. A brief unnecessary comment and some emotional and lightly mature elements may prove to have a similar effect, especially for very young children.

I recommend that parents of younger kids (particularly under the age of 7) watch the movie first before making a decision for their family.

Positive
Positive—I almost didn’t watch this one being based on wizardry and one of the main characters has a “Hades” patch on his jacket the whole movie. I am selective on the movies I watch, because Christianity is very important to me, which is why I almost didn’t watch it, but I do know that most of these type of movies have black magic, sorcery things in them. I have learned to look past that and enjoy the movie for the other parts, and I have to say this movie was a very fun, encouraging movie. There were so many positive messages in it about having confidence as a person and loving your family.

Sure none of it had any Christian aspects as far as leaning on God or any of that coming from God, so if you can enjoy a constantly moving movie that had non-stop adventure and a great message about character and loving your family, it is a great movie.

I will say, it’s one of the first movies that I recall hearing a female character referring to having a girlfriend. This was only mentioned once and that person was only in the movie in a short scene, however, we know this will become much more prevalent in movies.

So many of the other parts of the movie were very funny and it was actually a very well-made movie for its genre.
My Ratings: Moral rating: Average / Moviemaking quality: 5

Stephanie, age 45 (USA)
Positive—Another winner from Pixar. Have already recommended it to family, friends, and coworkers. An underlying message is the importance of fathers. Other messages about facing challenges and personal growth are portrayed with many laugh out loud moments, good character development, and a lot of heart.

While the characters are mythical creatures (elves, cyclops, centaurs, etc.) there is plenty of parody of various genre and films. My favorite was the sign outside a restaurant: “Now serving second breakfast.” The Lord of the Rings reference in a movie about two elf brothers on a quest was just one of many hidden treasures. The use of magic could be offensive, but taken in context, I took it to correspond to a character’s gifts, skills, talents, and growing self-confidence.

The entire cast did an outstanding job of voice acting and giving their characters warmth and depth. A fun adventure.
My Ratings: Moral rating: Average / Moviemaking quality: 4½