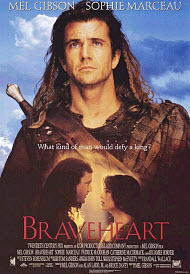 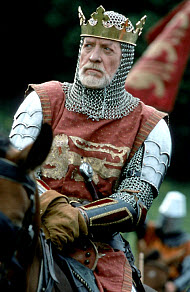 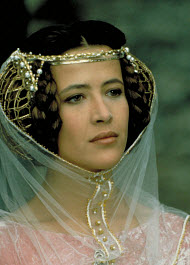 “The courage to face fear”

Though based on historical facts, “Braveheart” goes a little too far in demonstrating the violent nature of the men involved in the Scottish Highland/English battles of the middle ages.

The movie opens with a young William Wallace witnessing the hanging of several Scottish noblemen and their young squires. (This is the least of the violence yet to come, so brace yourself.) Left as an orphan after his father is killed in battle, Wallace is cared for by his wealthy uncle who raises and educates him …an education which includes the “art” of battle.

The story reveals the murderous execution of Wallace’s young bride of only one day, and later depicts his own tortured execution several years later at the hands of the English.

The movie makers would like to have us believe that it is his love for Scotland that makes William Wallace (Braveheart) take up his sword and lead thousands into battle. However, it is not until his beloved wife is murdered that he decides to seek his revenge against the English.

The historic significance of this movie is not lost, however, in all the gore and bloodshed. But, as with all too many releases of late, Hollywood feels the need to show us, in detail, the extreme suffering and dismemberment of men in battle. Nothing, nothing is left to the imagination.

We are shown deceit, back stabbing (figure of speech), and deception. Homosexuality is strongly implied. Nudity is briefly shown, as is adultery. The “F” word is used twice (however, the Scottish brogue is very thick and it is missed by most people.)

Most Christians (and many non-Christians) will see this epic film as distasteful because of the severe violence depicted, …a shame considering that the history it is based on is fascinating.

BRAVEHEART is a great film! It would have been better if more of the facts had been left in, and the fiction left out. The massacre of the nobles at the BARN did take place, but it happened in 1290, not 1280. Those who escaped the sword of Edward I had intentionally not gone to the Barn, where 360 nobles, including men, women, and children were slaughtered.

According to history, William Wallace did want to lead a peaceable life as a farmer, but after his education for the priesthood, and Edward I’s brutality, William took the words of one the priests to heart. “My son, I tell thee soothfastlie, no gift is like to libertie; never live in slaverie.” It was as a result of the murder of his father and older brother Andrew by the sheriff of Lanark because they refused to swear fealty to Edward I of England, the persecution of his mother, and murder of his wife that caused William to go from a peace loving man to a warrior like unto David of Israel.

It would have been better to leave out the adultery with princess Isabel, since the only way William could have know her or of her was during the seven years between the defeat at Falkirk and his capture on August 3, 1305. William during that seven years acted as a messenger for the pope, King Phillip IV of and several others.

Also it would have been a much better film if the event of William’s capture, imprisonment, starvation, semi comatosed state, and on the day of his trial believed to dead, and thrown out on the garbage dump. Then a woman who was a nurse when he was a child, begged for his body from the English, to give him a Christian burial. This old woman found as she was cleaning up the body, as was the Scottish custom for burial that a spark of life flickered in William. The woman and her daughter nursed William back to health. The film paints Robert the Bruce as being double minded.

According to history, this is true, until the capture, mock trial, and execution of Sir William Wallace. It was never Robert the Bruce who betrayed William Wallace, but by Rhalph Rea and several other Scotsmen at Robroyston. Edward I promised the “nobles” that if Scotland wanted to live in peace, that Edward’s army would take and destroy Stirling, and that they had to give up William Wallace to them. The difference between William and the landed nobles was that, the nobles were enslaved to Edward I of England by their land and title. William was not enslaved to Edward I, since he never pledged his fealty to him. William was also landless, and was fighting to avenge the British slaughter etc. and for Scotland’s freedom.

Edward I murdered anyone who was Scottish, including men and women of the cloth, and infants. The GREATEST Hero of Scotland, William Wallace on the other hand, trained an army of peasants, who would go on to route England’s greatest armies. He would prove that heavy horsemen were not impenetrable.

William’s army is reminiscent of Joshua’s army of a few, winning over thousands. The Scots' greatest asset was their lightening, guerrilla warfare; much like Judah Maccabees. However, William had standing orders that women, children, and priests, etc. were never to be killed, but liberated. Up to the hours and minutes of William’s life he carried his book of the Psalms next to his heart. His last requests were for a priest and to have book of the Psalms, immediately before he was grossly murdered on Edward I’s orders.

E.Stohlquist, age 46
I have seen the movie several times. First of all the screenwriter took license with the historical facts. Wallace never met the princess as she was never in the picture until some years after Wallace’s death. Longshank’s son was homosexual as history will tell you and his queen eventually tired of this and had him imprisoned and the Barons put him to death. As for the view of Scotland at that time, the film was very well done since it was still a very barbaric (as if the present age is not!), and I would really like to know how you can depict battle scenes with swords, etc. without any blood and guts (I would have preferred not to see them at all). Edward Longshanks was quite brutal to the Scottish people and committed many atrocities.

To denounce Wallace for his actions and merely calling them revenge tells what a low state Christianity has fallen to in this day and age. If you would denounce protecting the innocent (Longshank’s policy of prima nocte was plain out and out rape) and punishing the guilty, you have a serious problem with the God that is presented in my Bible. I think it is one of the best movies I’ve seen in years although I think that several scenes should have been cut to make the movie more appealing to a wider audience. Freedom is a dear commodity and must be preserved at any price.

I.E. Rapier, age 46
I liked the movie because I liked the story that it was telling. However, I believe that it did not need to include the graphic violence, nudity, or homosexuality. The movie would have been just as good or better (probably not as intense though) had those three things not been included in the movie.

Erin Stagner, age 15
I agree with all the previous comments, but the film inspired a passion and sympathy for Scotland and the highland people. It made me ashamed to be British, but highlights the depravity of mankind.

Gray Hodge, age 44
I, too, liked the movie for the most part. I was, however, offended by the fact that William Wallace’s fellow fighter, the guy who said Ireland was “his island,” used severe profanity (the “f” word) while supposedly speaking to God. Also, the movie leads us to rejoice when Wallace commits adultery in the film to a married woman, despite the fact that she was in a very unloving relationship forced upon her.