The Man in the Iron Mask

for sequences of violence and some sensuality/nudity. 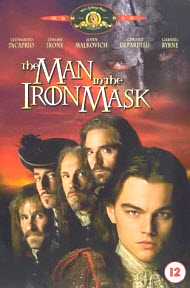 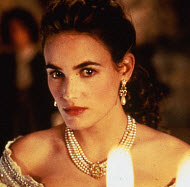 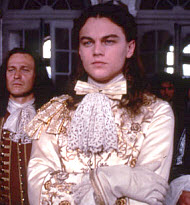 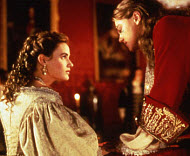 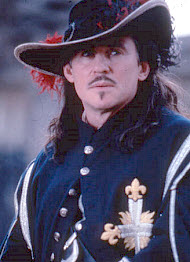 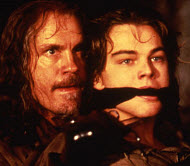 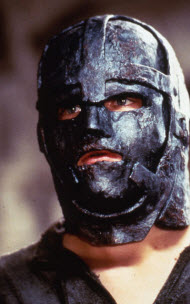 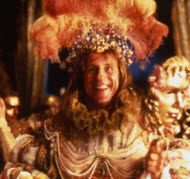 “For the honor of a king. And the destiny of a country. All for one.”

I have fond memories in my youth of brandishing a broomstick, donning a straw hat, and crying out, “All for one and one for all!” Like so many, I grew up with the legend of the Three Musketeers, fancying myself a noble Frenchman, fighting for the honor of the king. And so, I never miss a Hollywood incarnation of the legend.

Once again, Hollywood has treated us to another addition to the swashbuckling genre-“The Man in the Iron Mask.” This time director Randall Wallace (Oscar for best screenplay in “Braveheart”) brings the musketeers to the screen.

In this adaptation of Alexander Dumas' rollicking tale, King Louis XIV (Leonardo DiCaprio) has assumed the throne of France, much to the chagrin of the French people. The wicked, womanizing king has diverted valuable food and funds to maintain his foolish military campaigns, and the people of Paris are starving to death, as a result.

We find that the noble D'Artagnan (Gabriel Byrne) has become the captain of the musketeers and chief protector of the king. The other three musketeers, the lusty Porthos (Gérard Depardieu), melancholy Athos (John Malkovich), and the religious Aramis (Jeremy Irons) have retired from the royal guard. The three former musketeers, already vexed by the callousness of the king, are forced into active rebellion against the monarchy when the son of Athos is sent to the front lines of battle and killed so that the king can take his fiancé to be his mistress.

The valiant three must defy D'Artagnan, who remains loyal to the king, and enact their plan to remove the king from the throne. The plan revolves around a mysterious prisoner in the Bastille, the man in the iron mask…

This film is by no means a classic, but it is a rendition of a tireless familiar tale. It is a fun film full of action, intrigue, and lofty idealism. Some of the cast are not well suited for their roles, and although Wallace is an accomplished screenwriter, anyone who is expecting another “Braveheart” will be sorely disappointed.

The film is relatively clean by today’s Hollywood standard, and it incorporates many redeeming biblical elements. Loyalty and integrity are explored as the musketeers are faced with moral challenges. Prayer is portrayed in a positive way. At one point, Aramis makes a statement that forgiveness is the most important pursuit (contrasted with the lustiness of Porthos). Even Louis' affair with his mistress parallels the account of King David's adultery.

However, there are a few instances of obscene language and a profanity uttered. Porthos jests in course humor, and he is the subject of a scene where he bares his behind during a drunken escapade. There is also some sexually suggestive conduct and dialogue. Sexual intercourse is, also, implied several times, though nothing explicit (female breast nudity is shown). The swordplay and mostly implied womanizing of the king make the film inappropriate for children.

Overall, this film is recommended for all the armchair musketeers out there. Relive a little childhood. you’ll leave the theater wanting to take up your broomsticks for the king once again…

Positive
When I find myself pondering a movie and finding new revelations for several days after I’ve seen it, I call that a good movie. “The Man in the Iron Mask” was one of those movies for me. There are some great threads running throughout the film, and the more I think about it the more I find those threads tightly woven. For example, as captain of the Musketeers, D'Artagnon would teach his men to shoot without killing their subjects. This element comes into play at the end of the film, when the King orders the musketeers to fire on D'Artagnon and the others.

Another very endearing aspect of the film had to do with the love of a father for his son, which has a special place in the heart of a Christian.

An equally powerful theme addresses the spiritual “Nobility” of a person whose heart is pure. The greatest line in the film was “You have the heart of a King.” I could go on but I’d give everything away. You would probably want to avert your eyes during some of Pathos' scenes, but Pathos' lusty lifestyle is certainly not glorified in the movie. Other than that I strongly recommend the movie.

Chris Simmons
Negative
What has happened to us as Christians today??? …I was appalled by what I saw in this movie. Yes, 90% was great, but they had to throw in that disgusting 10%. It could have been a thoroughly great movie, except the trashy parts ruined it. My husband and I should have walked out and gotten our money back. What a bigger impact it would make if all Christians would do that everytime there is even a hint of trash. I bet Hollywood would at least start to take notice.

We are all so desensitized to the trash that Hollywood puts out that we tolerate it because of our personal desire to see a movie. If we could only sacrifice some of our entertainment in order to take a stand for our Savior. God is holy. That means there is absolutely NOTHING unclean about Him. There is NO room for sin or anything that is not holy. So we should think more about how we are representing God through our actions.

“Therefore, I urge you, brothers, in view of God’s mercy, to offer your bodies as living sacrifices, holy and pleasing to God—this is your spiritual act of worship.”—Romans 12:1 / “You are the salt of the earth. But if the salt loses its saltiness, how can it be made salty again? It is no longer good for anything, except to be thrown out and trampled by men. You are the light of the world. A city on a hill cannot be hidden. Neither do people light a lamp and put it under a bowl. Instead they put it on its stand, and it gives light to everyone in the house. In the same way, let your light shine before men, that they may see your good deeds and praise your Father in heaven.”—Matthew 5:13-15 / Just something for all of us to think about (including myself)

Heather Hambleton, age 25
Comments from young people
“The Man in the Iron Mask” is an excellent movie and a good Christian film (although the implied sex parts are altogether useless and if you don’t like looking at such things, ignore it). It glorifies Christianity (one of the Musketeers is a priest). DiCaprio does a good job of portraying both the evil King and his virtuous twin and all of the Musketeers are well-acted. Also, the film contains scenes of rebellion against authority, which in the film is justified because the King is a tyrannical jerk. Despite what was said, it is an excellent film, approriate for all 11 and up.

Matt Quinn, age 15
This swashbuckling adventure of the three musketeers brings us to a time where they are all in old age. Not only are all the musketeers old but none except Athos speak with a French accent (HMMM!) Isn’t that curious. Despite these flaws, I could follow through with the plot of the movie until the very end. In the end, we find out that D'Artangan is the father of the man in the iron mask. Wouldn’t that make him the father of the king too. Come on I had to take a brain moment and go “please give me a break, don’t tell me they are trying to do this.” I enjoyed the movie but felt that it could have been 10 times better but poor writing caused me to give it a fair rating.
I was appalled when I saw this movie. it could have been a wonderful and very deeply compelling movie if they had just taken out all the trash they had in it. yes the plot and story was pretty good but you do not need to put in sexual intercourse just for the heck of it. it ruins the movie completely. when I was watching that movie I should have gotten out of my seat and asked for my money back. we as christians are called to only watch and engage in things that are, as quoted in the bible “finally brethren whatever is true, whatever is noble, whatever is right, whatever pure, whatever is lovely, whatever is admiral think about such things” it is my firm belief going to movies that have content in them that warp god’s gift of sex that we should take a stand.