Muslims—What does the Qur'an say about Isa (Jesus)? 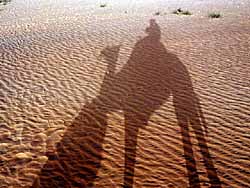 Over 1400 years ago, Muhammad (Mohammed) was born in Arabia. His father Abdullah was of the tribe of Qureyshi, and died before Muhammad was born.

As a lad, Muhammad traveled to Syria with his uncle on merchant caravans. Years later, he made the same journey while working for a wealthy widow named Khadijah. He later married her and, even though he was 15 years younger than she was, they had a good marriage.

Muhammad soon gained rank among the notables of Mecca. The Meccans claimed to be descendants of Abraham (Ibrahim).

As one who abhorred evil, Muhammad detested those who disobeyed the Scriptures. He was familiar with the teachings of the Jewish and Christian holy book the Bible (perhaps in reading it himself, if he was literate, or in learning of it through oral means via storytelling). He was very upset with the hypocrisy among the people: the idol worship, and anything dishonoring to God was very revolting to Him. He believed that Allah had revealed the Torah and the gospels (the Injil).

One who was greatly respected by Muhammad was Abraham (Ibrahim), whom he called an upright and righteous man.

"Abraham was indeed a paragon of virtue, obedient to ALLAH, ever inclined to HIM, and he was not of those who set up equals with ALLAH; Ever grateful for HIS favours: HE chose him and guided him to a straight path. And WE bestowed on him good in this world, and in the Hereafter he will surely be among the righteous. And now WE have sent revelation to thee, enjoining, 'Follow the way of Abraham who was ever inclined to ALLAH and was not of those who set up equals to HIM.'"—Qur'an, Surah 16:121-124

Abraham was also looked upon as one who fulfilled God's commands:

"And remember when his Lord tried Abraham with certain commandments which he fulfilled, HE said, ‘I will make thee a leader of men.’ Abraham asked, 'And from among my offspring?' God said, 'MY covenant does not embrace the transgressors.'"—Qur'an, Surah 2:125

Muhammad also had great understanding of the scriptures and faith in the angels who told Zechariah he would have a son (as in Luke 1:18, 57-60).

"So her Lord accepted her with gracious acceptance and caused her to grow an excellent growth and made Zachariah her guardian. Whenever Zachariah visited her in the chamber, he found with her provisions. He said, 'O Mary whence hast thou this ?' She replied, ‘It is from ALLAH.’ Surely ALLAH gives to whomsoever HE pleases without measure.

Then and there did Zachariah pray to his Lord, saying, 'My Lord grant me from Thyself pure offspring; surely thou art the Hearer of Prayer.'

And the angels called to him as he stood praying in the chamber, 'ALLAH gives thee glad tidings of Yahya, who shall testify to the truth of a word from ALLAH - noble and chaste and a Prophet, from among the righteous.

He said 'My Lord, how shall I have a son, when old age has overtaken me already, and my wife is barren?' He answered, 'Such is the way of ALLAH; HE does what HE pleases,'

He said 'My Lord, give me a commandment.' He replied, 'The commandment for thee is that thou shalt not speak to men for three days except by signs.

'O Mary, be obedient to thy Lord and prostrate thyself and worship the one God with those who worship HIM.'

When the angels said, 'O Mary, ALLAH gives thee glad tidings of a son through a word from HIM; his name shall be the Messiah, Jesus, son of Mary, honoured in this world and in the next, and of those who are granted nearness to God;

'And he shall speak to the people in the cradle, and when of middle age, and he shall be of the righteous.

Muhammad also speaks of the resurrection of Jesus:

"Thereupon she pointed to him. They said, 'How can we talk to one who is a child in the cradle?' Jesus said, 'I am a servant of ALLAH. HE has given me the Book, and has made me a Prophet; 'And HE has made me blessed wheresoever I may be, and has enjoined upon me Prayer and almsgiving so long as I live; 'And HE has made me dutiful towards my mother, and has not made me arrogant and graceless; 'And peace was on me the day I was born, and peace will be on me the day I shall die, and the day I shall be raised up to life again.' That was Jesus, son of Mary. This is a statement of the truth concerning which they entertain doubt."—Qur'an, Surah 19:30-35

In calling Jesus a messenger, Muhammad was also correct. He did not mean that Jesus was not the Messiah. Muhammad knew that one could be a messenger and not be a Messiah… but as The Messiah, one is also a messenger.

Jesus was both a messenger and The Messiah that Allah had promised! What is a Messiah? A Messiah is always known as "a Saviour… a liberator and a deliverer." God had promised to send one (Messiah) to pay the debt of sin for all mankind.

The Messiah!… God's gift to sinful man… The Saviour… The Liberator… Our Redeemer. The prophets of the Torah foretold of His coming. Muhammad and his Disciples revered Him… the Qur'an and the Bible reveal Him! The Messiah… The Saviour of the world! Neither the Qur'an nor the Bible speak of any other as being the Messiah!!!

Dear friend, that is the most profound truth! And it is truth that cannot be denied. Jesus is the one and only Messiah. He is the Saviour. He is the Messiah of the Muslims, the Jews, and the Gentiles. Millions throughout the world of every nation and creed accept Him as Saviour.

Many have followed false Messiahs and had their lives ended in death. They were sincere, but they were sincerely wrong. Had they only accepted the indisputable claim that Jesus is the Messiah, they would have found the peace that they were looking for, and the eternal life that God has promised to all who will accept Jesus as Messiah… the Saviour of the world. Yes, Isah Al Masih loves you! The Messiah that Muhammad wrote about… to forgive you and to be your Saviour… your Liberator… your Deliverer from sin. History tells us that He was crucified and died on a cross. History tells us that three days later there was an empty tomb. History, and hundreds of eye witnesses, tell us that He rose from the dead. But sadly many also reject the love and forgiveness God has offered in Jesus.

Allah has given you a free will. YOU must make a choice. You cannot be neutral.

Don't take this writer's word for it. Investigate for yourself the claims of Muhammad, the prophecies in the Torah, and the life of Jesus written in the Bible. The prophecies that were fulfilled by His birth, life, death and resurrection.

Check out the reasons why Paul, the greatest persecutor of Jesus' followers, became such a strong believer in Jesus as the Messiah… and why he became the world's greatest missionary.

If you are not already a follower of Isah (Jesus), you must make a choice 1) to believe that Jesus is the Messiah OR 2) to reject Him as Saviour. You can choose to believe the Messiah, Jesus, who said He would, and did, rise from the dead. Allah gave Jesus, born miraculously through Mary (Maryam, Sura 3:45) as Muhammed agreed, to the world… for you.

"For God so loved the world, that he gave his only begotten Son, that whosoever believeth in him should not perish, but have everlasting life."—John 3:16

("Son of God" does not mean that God had physical relations with Mary, but rather that God willed it supernaturally that Mary would become the Earthly mother of Jesus even as a virgin. See Surah 3:47-48)

Allah loves you. How could anyone want to reject such a wonderful love… reject Allah's forgiveness… His promises of eternal life? The Bible teaches how we can know where we will spend eternity.

Explore what the Scriptures teach

Muslims are seeking the truth by the thousands. Visit www.IsaalMasih.net and learn about Hazrat Isa, dreams and visions of the “Man in White”, the holy message of the Al-Kitab, and more…

Copyright © 1999, All Rights Reserved—except as noted on attached “Usage and Copyright” page that grants ChristianAnswers.Net users generous rights for putting this page to work in their homes, personal witnessing, churches and schools.