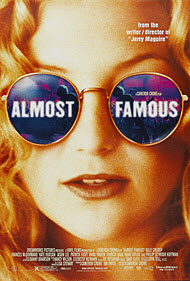 “Almost Famous” is a semi-autobiographical film by Cameron Crowe that will test the Christian’s ability to divide soul from spirit. It is a coming-of-age movie that concerns itself with a particular time and age, the seventies. And it is a sturdy teenage movie that shows a parent’s attempt to give her child wings to soar and at the same time, roots to anchor him. It is a movie about controlled hero worship.

In the film, young William Miller (Patrick Fugit) manages to finagle his way into a rock band’s inner circle. The band is called Stillwater and is “Almost Famous.” It has its collection of rock star types, but these rock stars are a gentle seventies bunch, oozing a kind of flower-children innocence, and that means well. William is supposed to be doing an article on Stillwater for Rolling Stone. This makes him an enemy. The editors at the magazine warn him that he is not to become “friends” with the band. The band tells him that reporters are “the enemy” and should not be trusted and it would be good of him to write a friendly piece. And his mother Elaine, (Frances McDormand) a college philosophy professor, wants him to stay away from drugs and to not lose his bearings. William, who is only 15, is in the middle of temptation and in the middle of a teenage life crisis, and he’s loving most of it.

William excuses the lies, deceptions, self-deceptions, sexual infidelities and ego battles of the group. After all, they are artists and artists are allowed these foibles. He does have one problem, though. He is in love with the groupie who calls herself “Penny Lane” (Kate Hudson) and this groupie is in love with the band member William has gotten closest to, Russell the guitarist with mystique (Billy Crudup). William’s love for Penny and the constant calls from his stressed mother are the anchor that keep him from falling utterly into a worship of this band.

The Apostle Paul tells us that the word divides between the soul and spirit and this movie is a movie that will challenge even the most discerning of Christians. There are many good reasons for liking this extremely likable movie, and there are reasons that will cause many Christians to dislike it.

Firstly, there is a great deal of sex, drugs, and rock and rolling going on. William actually gets “deflowered” by several groupies. Secondly, the movie tackles a complicated topic: human worship and human idealism. The point, unfortunately, is that the idealism is so secular… even the philosophical goodness of the mother is secular. Religion is not in the picture.

Most importantly, this film touches the human soul. It’s about a sweet kid who is respectful of his mother and trying to be good in a world of temptation. His aspirations are worldly aspirations …he has a dream and an ideal. “Almost Famous” speaks of community and connectedness (the scene in the bus where they all sing along with an Elton John tape is great stuff for the soul), and yet it is a connectedness that Christians can’t really join in. This group wants peace and love but… God is not the center.

The movie reminds me of the Olympic games: we see the greatness of human nature and feel the human need for some kind of Earthly glory. And yet, when we step back, we realize, as Willliam Miller does in this film, that all that glitters is not gold. This film touches the soul, but because Christ is not in it, it doesn’t really touch the spirit.

Lust and fornication in the Bible

Recommended. A fine drama set in the midst of 70s rock-n-roll. I didn’t expect much and thought this film would be more offensive than it was. Instead, “Almost Famous” was a pleasant surprise. The main character’s moral stance is a strong contrast to the lives of the band members. Even when he gets “deflowered,” he sure regrets it.

The fantasy and immoral world of the rock stars is not glorified. I think few viewers will leave “Almost Famous” wanting what they had. Instead, this is more of a journey of finding a way out to the “real world”. Do they succeed? You’ll have to see for yourself. My Ratings: [3/4]
Todd Adams, age 33
I personally enjoyed the movie very much. There were some parts that were a bit uncomfortable, but nothing big. The movie had a little bit of everything: LOVE, COMEDY, DRAMA. It did have a few f-words here and there BUT NOTHING TOO OFFENSIVE. I enjoyed the character PENNY LANE very much and I couldn’t help, but feel sorry for towards the end of the movie. The ending was great and even though my mother would have hated this movie, I give it a thumbs up. My Ratings: [3½/4½]
Valeria, age 18
Watching “Almost Famous” reminded me of the long trips I used to take with my Youth Group when I was a teenager. There was a space of about three or four years when we did a musical every summer and went on tour, and it was a lot like Stillwater’s tour in the movie (minus the drugs, alcohol and sex).

The scene on the bus when the characters sing “Tiny Dancer” together and temporarily patch things up brought tears to my eyes because I’ve been there. It reminded me how petty rivalry and runaway egos can destroy friendships… only by having God at the center of our lives can we find the strength to grow.

I really wish this movie could have been cleaned up a little for a PG-13, so I could take the kids in my Youth Group to see it. It also would be nice to see a Christian emphasis, but that doesn’t take away from this being a sweet, funny, touching movie. It’s refreshing to see a movie about teenagers that isn’t a sex comedy or slasher flick. I hope we see more movies like this… My Ratings: [3/5]
Jason Shepherd, age 27
“Almost Famous” is an excellent film. It does contain profanity, sex (mostly suggested off screen), brief nudity, and drug use, but for a change the sex and drug use are portrayed in not such a positive light. The character of Penny Lane is first seen as a perky type that can light up a room. Just take a look at the scene where she pretends to be a stewardess to the drugged out rockers. But as the movie goes on we realize what a sad character she truly is. Penny Lane mistakes sex for love and falls for Russell Hammond. She doesn’t think of herself as a groupie, but Russell does. But Russell isn’t portrayed as a bad person even though he is using Penny Lane as a sex object and cheating on his wife, but he is portrayed more as a weak man that can’t fight the temptations of sex and drugs that come hard and fast in the music business. This film shows how many young girls mistake sex for love and it really makes you feel for them.

“Almost Famous” has several terrific scenes. My favorites included when Russell talks to William’s mother on the phone, thinking she will be impressed to be talking to a famous rock star and she chews him out in such a way that he doesn’t dare talk back or hang up the phone, the rocky plane ride in which the band confesses just how they feel about one another, and the scenes involving Phillip Seymour Hoffman who along with Frances McDormand deserves Oscar consideration in supporting actor category. Some great music and characters that are not portrayed as good or bad, but as a little or a lot of both just like real people.

“Almost Famous” is one of the years best films. My Ratings: [2½/4½]
Andrew, age 24
I’ve been a fan of Cameron Crowe for a while. As a director, he possesses the phenomenal quality of depicting any era honestly, from the early 80’s in “Fast Times At Ridgemont High” to “Say Anything” during the late 80’s. Since the basis of the film is the sub-culture of rock n’ roll in the early 70’s, it captures the essence of that time. This includes the drugs, sex, and language that defined this particular group of people.

Despite these aspects that render the film somewhat offensive, the directing was good: the questionable scenes were done almost tastefully. Every scene was coherent, nothing seemed forced or choppy. But the acting was exquisite and certainly worth the $8.50. Kate Hudson was wonderful as the enigmatic groupie Penny Lane and newcomer Patrick Fugit was a delight to watch as the earnest journalist William Miller. A must see if you can stomach a couple semi-offensive scenes. My Ratings: [3/4]
Ardella Anderson, age 20
Movie Critics
…at least 29 “f” words… various sexual encounters are suggested between band members and groupies…
ScreenIt!
…taps the era’s contradictory glories: its druggy myopia and sleaze, but also its freedom…
Owen Gleiberman, Entertainment Weekly
…a well acted ensemble piece without a single lackluster note…
Laura Clifford
…the protag’s mother (Frances McDormand), a somewhat eccentric intellectual who abhors rock, and particularly drugs, is far from being a standard-issue moralist…
Todd McCarthy, Variety