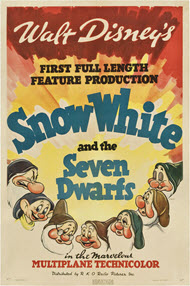 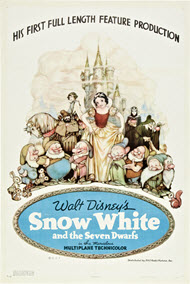 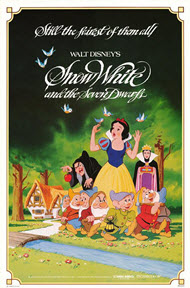 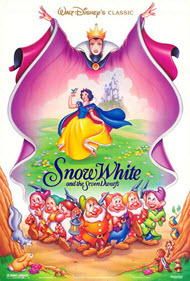 I have loved this movie since I first saw it as a kid. It’s one of Disney’s masterpieces, made with more sheer brilliance than any other animated feature film I have ever seen. There is no sex, profanity, violence (though there is some scary stuff in the film), etc. There are mild occultic themes as Snow White’s wicked stepmother consults a magic mirror, hence the saying, “Mirror, mirror, on the wall” (the occult is portrayed as an evil force in this film).

The film is an adapted version of the Grimm Brothers’ fairy tale of the same name. Snow White is a fair maiden who is held captive by her wicked stepmother. She flees her stepmother and finds a small cottage in the woods inhabited by seven little men (or dwarfs) who work in a diamond mine. She befriends the dwarfs, among them the woman-hating Grumpy (who eventually grows to like Snow White).

Believe it or not, there is a Biblical reference in the story. A witch (Snow White’s stepmother incognito) comes to the door of the dwarfs’ cottage and offers Snow White a bite of a poison apple. She takes a bite and falls on the floor, “dead,” somewhat similar to the story of fall of Adam and Eve where they disobey God and eat the forbidden fruit, thus bringing sin and death to mankind. Of course, Snow White is brought to life by love’s first kiss, which symbolizes how Christ came back from the grave after He died on the cross. I never found this out until I had actually seen the movie again and recalled that scene in my head.

Despite some minor scary scenes, “Snow White” is a fun fantasy film for people of all ages.

Positive
Positive—I really think it’s a very nice movie, and kids love to watch it. I would just like to add that I believe when you are watching this with your kids to just explain to them that what that evil stepmother is doing with that mirror and the whole scene where she is making the potion and kind of putting a curse on the apple should just be explained to the children (especially young ones) that God hates witchcraft, etc.
My Ratings: [Better than Average / 4]

Lindie, age 20
Neutral
Neutral—We watched the Disney classic “Snow White and the Seven Dwarfs” out of interest in seeing the “Wicked Queen,” who was portrayed by Lucille La Verne, born as Lucille Mitchum and a great great great aunt to my husband. We had heard about his distant relative’s role in the movie and so years ago had bought a video copy but had never watched it, because we feared it would be too intense for our daughter. She asked to watch it today, and since she is now almost eight years old, we agreed. We found much of this movie fun and charming. Snow White was endearing and the dwarfs and woodland animals were funny.

The animation was great for its time. But this film had some very dark and frightening moments… much more so than I had anticipated! Our daughter handled these frightening images well, but it is hard to imagine younger children viewing this without fear (unless they have grown accustomed to such dark fare). Be aware that in this “classic children’s movie,” you will find references to murder, cutting out a human heart, and, of course, much dark magic, which is (thankfully) represented as evil. The face in the magic mirror seems almost demonic (and is indeed “summoned” to the mirror). A man instructed to murder Snow White and collect her heart for proof raises a knife threateningly over the girl.

Driven by fear and panic, Snow White imagines terrifying creatures such as clutching trees and staring eyes attacking her when she is lost in the forest. Skeletons are shown in the dungeon of the Queen, obviously the victims of torture (one was left caged with a cup of water just out of reach, another hangs on the wall, and a human skull is a perch for the queen’s crow).

The brewing of a transformation spell is shown during an intense scene in the Queen’s dungeon. The “old crone” persona of the Queen is hideous and disturbing. (Interestingly, my husband’s relative voiced not only the darkly beautiful queen but also the crone, and was actually used as a model for the artists for the old crone’s facial expressions). Indeed, great great great Aunt Lucille managed a chilling performance! But I wonder if it is not too chilling and too dark for young viewers.

On a positive note, as Snow White is preparing for bed in the dwarf cottage she says a prayer. Unfortunately, she also seeks to have her wishes granted by eating a magic apple, so who knows what the prayer was meant to convey. One can also wonder how much “true love” a prince could have for a girl he met only once… but thus is often the romantic love portrayed in Disney princess films.

If you are aware of “minced oaths” and euphemisms for the name of God, please know that the word “gosh” is uttered many times, as is “Jiminy Crickets,” which is a veiled use of the Lord Jesus’ name. We don’t allow such speech in our home, and it makes me wince to hear it, as I know what it actually means. If you aren’t familiar with minced oaths, look up that phrase and you will learn what some innocuous-sounding words actually represent!

So there are some issues here beyond the dark magic and frightening imagery. Most will call me overly cautious, but this movie left me with a disturbed feeling, and I do not want it to be something my child watches repeatedly. I think we will put this one away, keeping it only for historical interest because of my husband’s distant relative.

I rated it as “average” because I am not quite prepared to call it “offensive,” if only because the dark magic was portrayed as being obviously and blatantly evil.
My Ratings: Moral rating: Average / Moviemaking quality: 4