for strong sexual content, language and some drug/alcohol use 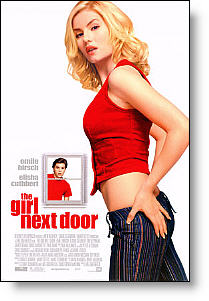 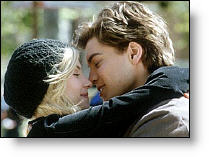 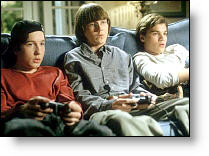 Tips on how to deal with sexual addictions

Is there a way to overcome excessive lust for sex? Answer

Why does Hollywood continue to promote immoral programming? Are YOU part of the problem? Read article

“Matt never saw her coming… but all his friends had!”

This movie is a takeoff on the Tom Cruise movie “Risky Business.” The story line is about a young women (Danielle) who is attempting to get out of the pornographic movie business and “regain her innocence.”

Danielle temporarily moves next door to Matthew (Emile Hirsch) to house-sit for her aunt. Of course, she is very beautiful and captures Matthew’s attention right away. Matthew is a smart, ambitious young man who is trying to go to Georgetown University after graduating High School. His goal is to one day become the President. He is also helping to raise $25,000 to bring a “brilliant young man” called “Samnang” from a poor country to live and go to school in the United States. However, the idea is that Matthew’s life is a little too “flat,” and needs to be spiced up. The story surrounds him and the innocent relationship he initially develops with Danielle.

This friend of Matthew’s is very obnoxious and perverse—constantly using the f-word. Never once were his parents shown during the movie, and he spends all of his spare time watching and thinking about pornography. It is very disturbing.

The Bible warns Christians to set their minds on things above, not on the things of this Earth (Col 3:2), and that “marriage is honorable among all, and the bed undefiled; but fornicators and adulterers God will judge” (Hebrews 13:4). Over and again, the New Testament tells us to flee those things that would defile our minds and spirits. This movie fits very well into that category.

Positive
Positive—I saw this movie because of Emile Hirsch, who has proved his talent in movies like THE DANGEROUS LIVES OF ALTARBOYS and THE EMPEROR’S CLUB, which was better than I expected it to be. And as for this movie, which some people seem to believe is Hollywood’s way of promoting pornography, I loved it. Mostly I loved the romance and the nobility of it all.

There is a nobility about Matthew’s love for Danielle that is precious. He does not get excited about her involvement in porn—he is terribly upset by it. But he loves her anyway. He must sacrifice his ideal image of an innocent, beautiful, pure woman because he loves a real woman. He can’t have his fantasy girl—he gets the girl he loves.

If there are problems with this film, they include the three or four endings, which make it longer than it should have been.

As for the character of the porn-addicted friend—just like Vince Vaughn’s character in OLD SCHOOL, it turns out that he’s all talk. When it actually comes to doing what he’s told everyone else to do, he can’t. He is an endearing, John Cusack-esque character who is a little on the pathetic side, but a genuine friend to Matthew.

Negative elements of the film: the length, some of the nudity. (The sex scene between Matthew and Danielle, however, is very tastefully done.)

Postive elements: Emile Hirsch’s performance, an excellent soundtrack, sacrificial love, responsibility, condemnation of the porn industry. That, and it’s a great love story.
My Ratings: [Very Offensive/4]
Donna, age 21
Positive—This isn’t a movie for kids, but it’s definitely one that older teens and young adults will like. It’s got some very funny moments and the characters are all likeable, even the “bad” guys” There’s also an awesome ending that you completely don’t expect, all I’ll say is, you’re expecting one thing and another (pleasantly surprising) thing happens. There’s a bit of drug use, but like in a lot movies, it’s not glorified, rather made to make the character seem ridiculous. There is some nudity (nothing frontal, just some bums and breasts) but if you’re the type of person who gets offended by that this probably isn’t the movie for you.
My Ratings: [Average/3]
Kat, age 19
Positive—This movie moved me to tears. I broke down seeing Matthew pursue her to the convention in LA, the greatest concentration of depravity, because he loved her and wanted to pull her out of that lifestyle. For the “Christian” version, go read Hosea. While I didn’t like the ending, or scenes which didn’t contribute to the overall value (with nudity) the movie itself is a wonderful picture of genuine love and commitment. The “porn addict” friend is a good portrayal of the effects of porn—inability to form genuine relationships or see women as more than objects.

On another note, seeing this overwhelmed me with conviction for the times I had given in to temptation to see pornography—without ever realizing how terrible, destructive and dehumanizing this is. “Danielle” is a person—as the women who do this for real. Don’t take your kids to this, but older adults may enjoy it. Get them a Bible study on the book of Hosea in the Old Testament instead.
My Ratings: [Average/3½]
Eric, age 23
Neutral
Neutral—A fairly respectable message double-coated in rampant sexuality describes “The Girl Next Door.” To start off, this film is standard teen romp fare. The movie itself promotes a good message, it’s never too late to turn from your past and change for the better. Danielle (Cuthbert) wants to leave her life as a porn star and wants to be viewed as a normal person, not a sex object.

She finds an innocence in Matthew (Hirsch) and it makes her feel better not to be degraded. A side message is to enjoy life. Matthew is so caught up in achieving academically he has failed to find the balance of having a normal social life. It’s good to see him break out of his shell when he meets and gets to know Danielle. While I appreciated those messages of the movie, families will not want to sort through the sexual content to reach the end. The central character being an ex-porn star opens doors for heavy sexual content.

Sex for play is a major downside to the film. Love does not seem to be a factor for the most part and when it is, it is outside of wedlock. “R” rated profanity is also ever present. In the end, the events of the movie do not play out as they would in real life. People who find themselves in situations similar to Matthew’s don’t escape the problems as easily as he does, and are definitely not glorified for them in the end.

Reviewer’s response: I read Bob’s opinion (above), and I’m glad, if that’s what he got out of it. However, I disagree with Bob for some of the following reasons:

Negative
Negative—…just another Hollywood propaganda tool to promote sex. They ruined another movie that could have been good. The profanity could have been removed and the nudity diminished and still achieved the same plot. I agree that it does portray the seemly side of pornography. I don’t encourage anyone to see this movie, but I pray that any women who do decide to do so will see that all PORN does is pray on women, uses them, and then discards them as if all they are is a piece of meat with which to satisy the greedy, lustful, evil desires of men.
My Ratings: [Very Offensive/1½]
S. Owens, age 57
Negative—I had liked Risky Business and I was told that the story was similar so I went to see “The Girl Next Door.” I must say, to the films credit, the story is creative and takes some unexpected twists and turns. However, the producers could have done the same plot without the nudity and graphic details. One scene in the film sums up contemporary popular culture well when the “villain” in this “melodrama” says, “sometimes you have to do bad to do good.” Hedonistic moral relativism just bellows out of this film like smoke from the twin towers on 9/11. If you combine Burt Reynolds “Boggie Nights” (which was not as good as this one) and “Risky Business” you have “The Girl Next Door.” If you do decided to see this film, which I didn’t think was a total waste of time, take this warning and go by yourself. I’m almost ashamed to admit that I went and I certainly wouldn’t have wanted my wife or children along, which begs the question… I know!!!
My Ratings: [Extremely Offensive/4]
Bob C., age 40
Comments from young people
Negative—This movie isn’t as “offensive” as it’s just plain filthy and boring. Except for a gay slur that you’ll probably miss, it’s not that offensive, considering almost every teen who sees the movie uses the word. It’s a comedy, with no funny or interesting characters and just goes nowhere. Basically, it sucks the youth into it with a promise the female lead gets naked. This never happened and every 13 year old boy and 20-something year old man was disappointed. I thought the movie was pretty bad, but somehow better than I thought it would be, though I was dragged to it by 2 friends and a girlfriend. Anyhoo, I don’t understand how a handful of sex jokes are “offensive” (at least it’s not as “offensive” as using the N-word), but some people are just really uptight. I didn’t laugh, I didn’t smile and the movie is just getting you to see it by using porn as its theme. Film: D+
My Ratings: [1½]
A.J., age 16
Negative—This is what you call a porn film . This is the sickest most perverted movie I’ve ever seen. Stay away from THE GIRL NEXT DOOR.
My Ratings: [Extremely Offensive/3]
Joe DeNville, age 13
Neutral—…This film made some children to appear morally bankrupt, but not all. The main character worked hard in school, and took his studies seriously. He was portrayed as having morals, but not many. The film showed some highschool kids wanting to become famous porn stars. Also seen in this movie were some “popular” jocks, who would resort to violence, and would drink. This is a reality of highschool…
My Ratings: [Very Offensive/3½]
Hailie, age 15
Positive—I think it was a very funny film, and I saw the unrated version, although it did have a modest amount of nudity, there was much more to it than that. Like others have said, it is about a boy trying to save a girl from her career as a “pornstar.” I think it’s just hilarious, and if you can’t laugh at sex and sexuality then what can you laugh at?
My Ratings: [Better than Average/4]
Andrew, age 17
Movie Critics
…Who in the world read this script and thought it was acceptable?…
Roger Ebert, Chicago Sun-Times
…romantic theme is lost in the filth of sexual content and dialog, homosexuality, foul language and profanity, and glamorization of the porn industry…
Brian Hughes, Preview Family Movie and TV Review
…graphic sexual content and moral depravity…
Bob Smithouser, Plugged In
…the porn component makes “The Girl Next Door” feel contrived and exploitative…
Allison Benedikt, Chicago Tribune
…raunchy…
James Berardinelli, ReelViews
…alternates between slobbery adolescent male fantasy and prim Hollywood moralizing, with valuable lessons trotted out in skimpy lingerie…
A.O. Scott, New York Times