also known as “Farlanders,” “This Must Be the Place”
MPA Rating: 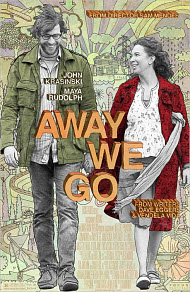 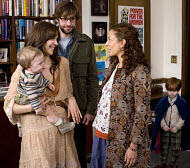 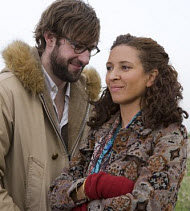 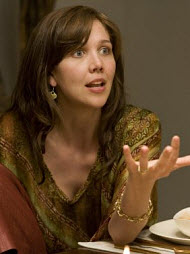 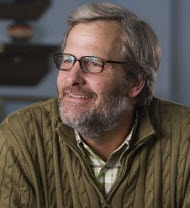 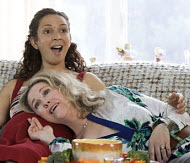 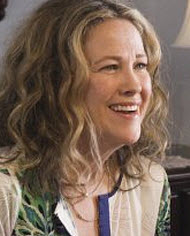 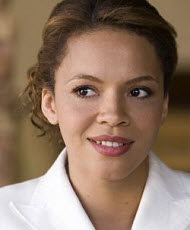 Paradise in the Bible

Searching for the perfect place to raise a family

“Away We Go” may be one of the cutest titles for a romantic comedy about a couple trying to find a new home as they await the arrival of their first child. Unfortunately, other 3 word titles such as “Why get married?” or “What’s the point” may have been more appropriate and less misleading in describing what Sam Mendes’s latest film is really all about.

Burt Farlander (John Krasinski) and his live in girlfriend, Verona (Maya Rudolph) are 34 year old college drop outs who, although deeply in love, are approaching middle age without any real plan or idea of where they’re going in life. When news of a baby comes, and Burt’s parents (Catherine O'Hara and Jeff Daniels) announce they’re moving away to Belgium, Burt and Verona find no reason to stay where they are and take their grand adventure to find where they’ll build the perfect family.

Sounds sweet huh? I thought so, too. But there’s a few things that make Away We Go’s version of “sweet” leave an awkward aftertaste in the back of your mouth.

The surface plot is far less important than the two main subplots, both of which are very simple to follow. The first is Rudolph’s inability to cope with her parents’ death, which happened approximately 15 years ago. She talks around the subject, even when she’s with her sister, and the movie encompasses her coming to terms with herself over what happened.

The second subplot plays throughout as more of a question: What is a family? Or what makes up a family? At first I asked myself “Why did this have to be another film about a couple getting pregnant without being married?” I quickly figured out that the whole film is subtly about why the very thing I questioned is simply OK. The trips that Krasinski and Rudolph take on the exterior look like casual trips to see friends and try to find a home in various cities: Phoenix, Madison, and Montreal.

But the trips end up playing like a nightmare version of Walt Disney’s “Carousel of Progress” featuring Tomorrow Land’s worst families. A hippie unmarried couple that believes in exposing their kids to their sexuality with each other but not strollers, a married couple that drinks, gambles and swears and believes the only reason to get married is to guarantee you won’t run away, and a trip to see John Krasinski’s brother who is now raising his daughter on his own and trying to figure out how to tell her that her mom left in the middle of the night and isn’t coming back. Although this happens in the real world, it doesn’t really give a fair look at families in America, but then again, that’s the point isn’t it… The underlying message, which is actually stated in the film using syrup on pancakes to illustrate, is “Love (or syrup) is all you need to hold you’re family together.”

Unfortunately, the debasing of the family is one of the main reasons our country is in moral decline.

Aside from the troubling message of the film, the language is far rougher than it needed to be. This isn’t a film where gangs, mobsters, crime lords or any sect of the bottom feeders of the world are shown. This is a romantic comedy, right? Why the coarse language? Why the 15 F-words? Why the parents shown in the film having a bad case of gutter mouth? Is this really what American families are like? I didn’t see the point in it.

The sexual aspect of the film is rough, too. Constant jokes about male and female parts, lesbians and gays, and the most awkward opening scene to a movie I have EVER (I’m not kidding) seen in which John Krasinski figures out Maya Rudolph is pregnant by performing oral sex on her.

In all, “Away We Go” only teases us with glimpses of humor and sweetness. Krasinski’s comedic brightness keeps the story moving along well enough, but the rest of the film just plays out like a sad trip down “how did we as Americans end up where we are?” lane. A road that reminds us more marriages are ending in divorce, more children are being raised without their biological parents, and more families are being broken apart. But it’s Okay, as long as we’ve got love (or syrup) to hold us together right?

Positive
Positive—A seemingly perfect couple is the heart of the focus of Sam Mendes’ newest “Away We Go”. The director of films like “American Beauty” and “Reservation Road” presents another story of a family that’s just starting out in life. However, this is not a married couple just yet. Burt Farlander (John Krasinski) and his girlfriend Verona de Tessant (Maya Rudolph) start out a happy couple, but winds up getting his girlfriend pregnant.

The movie starts off with a subtle announcement during a night together in their trailer-park house, and the majority of the film picks up six months later: Burt is a likable guy who sells insurance, while Verona is an illustrator. After spending an evening with Burt’s parents, they come up with an idea to travel cross-country to meet their friends and family members, all the while trying to find out where a suitable place would be to raise the child. They start out by telling the parents: Verona’s are dead, and Burt’s parents aren’t waiting around as they are moving to Antwerp in exactly a month before their child is due. They take a trip across town; they start at Phoenix, moving to Tucson to spend quality time with Verona’s sister Grace (Carmen Ejogo), way up to Canada and then back down to Miami.

During that time on the road trip, they find out that all the friends and family members they once knew have a dysfunctional lifestyle. The only sane ones are the aforementioned Carmen and the Garnett family (college friends of both Burt and Sam), but they too seem dysfunctional on a certain level. In a sense, they find out what it means to start a “home” and a family.

The movie was on a fairly distinctive level as other works of Sam Mendes, and this is the most poignant and lyrical of his films by far: at times the movie switches to dramatic format, hitting us with comedic timing at the right moment.

I felt John Krasinski played his role well, and Rudolph greatly traded her SNL comedy shtick for some her dramatic chops. The music by Alexi Murdoch is perhaps some of the best music I’ve heard all year. This isn’t a feel-good movie, but it’ll make you laugh and just have a good time by showing a simple slice of life itself.
My Ratings: Moral rating: Offensive / Moviemaking quality: 4

Christopher Walker, age 28 (USA)
Positive—I think it’s time that we as Christians in America wake up to the fact that we live in a fallen world and as such the majority of the films produced reflect this state. That said, I thought the film “Away We Go” was wonderful. Sure it made me uncomfortable at times, but, as a “follower of Christ,” I would question my own faith if a scene of oral sex, albeit under the blankets, didn’t make me uncomfortable in some way. This movie portrays people as they are in this world; flawed. If you are surprised or offended by the way the characters act on screen, or the foul language they use then you must not get outdoors much. Are we blinded to the fact that more and more Christians are living together and having sex before marriage?

A well-known pastor who is seen to be “relevant” to our times, who has amassed a huge following, swears from the pulpit and in our eyes this is perfectly fine? Yet we presume to hold ourselves above everyone else as such great paragons of virtue. By God’s grace we are saved and that alone sets us apart from the rest of the world. This doesn’t give us license to go out and sin till our hearts are content. We are not to abuse our freedom in Christ, but this freedom does make us capable of living in this world and not being of it.

I can go see great films like, “Away We Go,” and not leave the theater incensed or feeling offended because I hear more than 15 F-Bombs on a daily basis walking down the streets of the city in which I live (this doesn’t make me want to go out and say swear up a storm, but rather change the way I speak to others). I see people treat each other like crap everyday, that includes my Christian brothers and sisters as well (this doesn’t make me want to slap someone upside their head, rather this makes me want to change the way I treat others). I’m surprised any of us can see clearly with all the planks blocking our vision.
My Ratings: Moral rating: Average / Moviemaking quality: 4½

Mo, age 30 (USA)
Neutral
Neutral—I went to see this independent film because I enjoy off the beaten track movies, and I think John Krasinski is a very fine actor. This is a fairly interesting movie about a couple awaiting their first child who are looking for the right place to live, and travel to various places where they have relatives or friends looking for a support group for their new family. The couple is likable, but their friends and family are completely dysfunctional and totally unsympathetic.

The couple is not married because she refuses to get married. They are however, very devoted to each other. Because of their personalities and their relationship, they become almost an apologetic for not getting married. This is what I found disappointing in this movie. It makes not getting married look right. Their married friends and family are crazy, but they are not, thereby making it appear that marriage is not necessary or valuable. Not recommended for moral reasons.
My Ratings: Moral rating: Very Offensive / Moviemaking quality: 4

Tim Grierson, Screen Daily
…John Krasinski and Maya Rudolph play an endearing couple at the heart of this film, but the cast of over-the-top characters around them are more contemptuous than comic. …

Kenneth Turan, Los Angeles Times
…Leave aside the childish wishing scenario in which Burt and Verona are simply handed everything they want without earning it in any way. All of this I’d forgive—if I liked the main characters. …