The Imaginarium of Doctor Parnassus

for violent images, some sensuality, language and smoking. 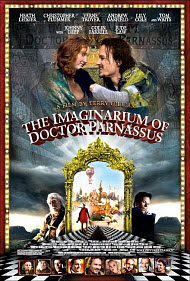 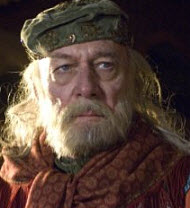 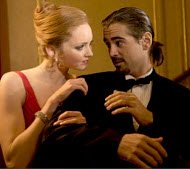 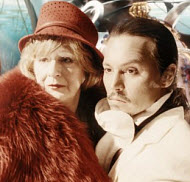 Magic and magicians in the Bible 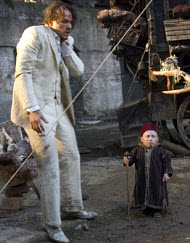 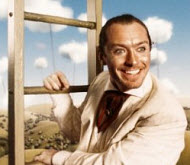 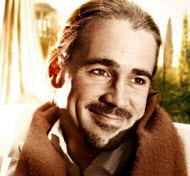 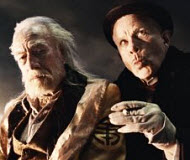 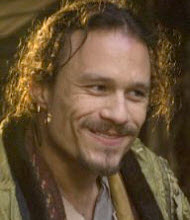 In a seedy part of present day London, England a small troop of Gypsies have setup shop as “The Imaginarium of Doctor Parnassus”. Heralded by a side-show barker, Dr. Parnassus (Christopher Plummer) sits serenely as all are invited to step through a magic mirror to see their hearts desires fulfilled.

As you can imagine, the vividly surreal experiences are as vastly different as the ‘customers’ that enter; A young boy experiences a videogame-like world, a drunk finds himself awash in a river of liquor bottles or the amusing vision of a rich lady who is dwarfed by gigantic expensive shoes and Faberge eggs.

But behind the theatrics is a tortured soul. His only true confidant is the company’s midget Percy (Verne Troyer) who tells him that, with his daughter Valentina’s (Lily Cole) sixteenth birthday coming in only three days, he must now tell her the truth about his past.

The story he tells her goes back more than a thousand years to an original bet gone horribly wrong that he made with the Devil (Tom Waits) or Mr. Nick as he calls him. At that time he was granted immortality which he soon realized was actually a curse. A curse now compounded as the last deal he made with Mr. Nick came with a price—that of Val on her 16th birthday.

Yet, on that night, his fortune began to change. Rescuing a man hanging and left for dead under a bridge, the grateful Tony (Heath Ledger) becomes a part of the troop and soon helps them redefine the show and attract a better class of customers. Mr. Nick also returns and offers Parnasus a new wager that may yet save Val. With so little time left can Parnassus beat the Devil at his own game?

Language is an issue. The ‘s’ word is used around five times, b#### by itself and in SOB are used three times, bastard is used once and Val’s body parts are described in a vulgar fashion by a drunk. The Lord’s name is taken in vain about six times. We should keep in mind that language, once only found in “R” rated movies is now frequent in those labeled PG-13.

The sexual content is limited to Val’s near nudity after the show is reworked, and she is seen onstage as Eve with a wig of long golden tresses covering up most of her form. Val does speak to Anton (Andrew Garfield), the young barker, suggestively saying her ‘age of consent’ is coming up and is seen in underwear after a sexual tryst later that is brief and unseen.

The occult and supernatural encompass the film. There are occult like symbols on Tony’s head, monks are seen meditating on flying carpets, Parnassus uses and believes in tarot cards, and there is, of course, the over arching theme of dealing with the Devil for things such as ‘everlasting life’.

The Devil is seen as the only power in this story around which Parnassus must always be striving with. The Bible tells us that “Sarah became pregnant and bore a son to Abraham in his old age, at the very time God had promised him” (Genesis 21:3), yet from Parnassus’ immortality to the conception of his daughter Val by her then elderly mother God’s role in this film is seen as taken up by Mr. Nick.

The movie does, in some of its imagery, portray a bleakness of spirit and the loss of one’s soul is eerily portrayed as an endless trek across frozen tundra. How much worse the reality will be, for as the prophet Daniel says,

“Multitudes who sleep in the dust of the earth will awake: some to everlasting life, others to shame and everlasting contempt.” —Daniel 12:2

The Word of God also teaches us that immortality is not for us here on Earth for, “Just as man is destined to die once, and after that to face judgment, so Christ was sacrificed once to take away the sins of many people…” —Hebrews 9:27

“…Imaginarium…” tackles the conflicts within man’s soul while avoiding any reference to the ultimate resolver of conflicts and redeemer of our souls, God. In this way it is a morality tale with no morals and will be a problem for those not grounded in the faith. Consider the Word of God when it teaches us,

Alcoholism plays a sinisterly pervasive part in this tale, and it is thankfully not glorified. Parnassus’ dependence on alcohol is one of the driving forces behind his growing separation with his daughter, who desperately wants to run away, as well as his own mental instability. I did appreciate this theme as it goes a long way to explaining some of the more objectionable aspects of the film.

Critics and viewers alike will probably focus on two things; the incredible visuals presented and Heath Ledger’s performance. The heights and depths of the soul during these ‘experiences’ are both breathtaking and at times horrifying to behold, almost making it worth the price of admission. Heath Ledger’s final role is filled with a nuance and expression that reminds us again that his talent will be missed. The use of Johnny Depp, Jude Law and Colin Farrell to ‘fill-in’ Heath’s role was convincingly done and added, rather than detracted, to the film.

‘Imaginarium’ is indeed a deep and thought-provoking film, but not one that most people will enjoy. Director Terry Gilliam’s films are always dark, gritty and clearly painstakingly created, and this one is no exception. While I have appreciated most of his work in the past,‘Parnassus’ is edgier and darker than most. Not your typical film, and not for the ‘weak-spirited,’ it earns its PG-13 rating and will be appreciated more by a select few and fans of the late Heath Ledger.

Negative
Negative—The storyline revolves around a classic Faustian theme, in which Dr. Parnassus makes various bets with the Devil (the Gnostics view of the Christian God) throughout his life. Looking deeper into the symbolism of the story, Dr. Parnassus (representing the Gnostic God of good) and his traveling show are a metaphor for the esoteric teachings transmitted through the ages via Mystery schools. He is a human manifestation of the “path to enlightenment” of the Buddhists or the “inner-Christ (Anti-Christ)” of the Gnostics.

By inviting people into the magic mirror, he transports them onto the spiritual plane where they can choose between spiritual fulfillment and enlightenment (represented by a pyramid or a ladder, depending on the person) or ignorance and materialism (represented by a pub or a sleazy motel). “Evil” imagery in this film—like the Devil in the sleazy motel—is always accompanied by Christian symbolism in order to equate the two. Judeo / Christian = Evil.

While “positive” characters are surrounded by occult symbols. Satanism / Witchcraft = Good. This film and others like it have the effect of (OR are created TO) gradually villanize Christians and pave the way for their open persecution. This technique was used in Nazi Germany but now its has been perfected and is far more gradual and pervasive. John 16 2—“For you will be expelled from the synagogues, and the time is coming when those who kill you will think they are doing God a service.”
My Ratings: Moral rating: Extremely Offensive / Moviemaking quality: 4