for animal action and humor. 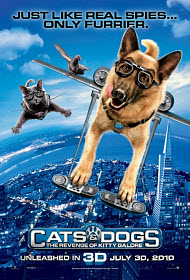 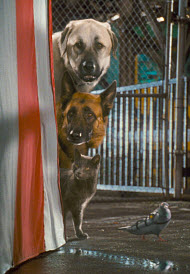 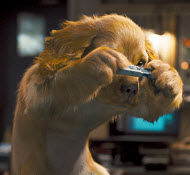 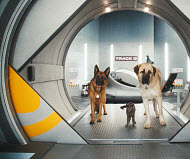 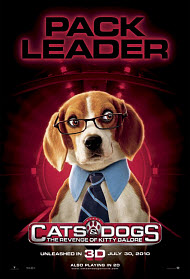 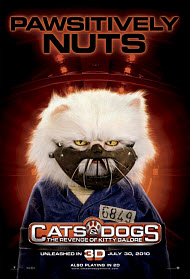 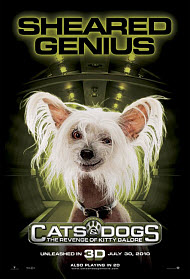 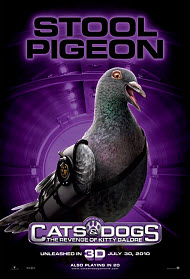 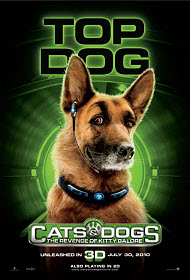 An innocent looking puppy brought into a satellite station turns out to be a cat in dog’s clothing. Kitty Galore, rogue agent of the cat organization MEOWS, is there to steal plans that will bring about her revenge upon dogs and the world.

Diggs (James Marsden), a former member of the police’s K-9 unit, is now literally in the dog house after a botched mission. He becomes the latest recruit of the underground dog network last seen in the original movie “Cats and Dogs” and is “dog-kind’s” last best hope to stop Kitty Galore (Bette Midler) from driving the world’s dogs literally insane.

While Diggs’ policeman trainer Shane (Chris O'Donnell) searches for him, Diggs and the team, led by alpha dog Butch (Nick Nolte), reluctantly find themselves in an uneasy alliance with MEOWS and a cat spy named Catherine (Christina Applegate).

Trying to find the evil genius behind this turns out to be no easy task. so, besides tracking down leads, they regretfully find they must also enlist help from their old arch enemy: the imprisoned Mr. Tinkles (Sean Hayes). But time is running out, and the countdown has already begun.

“Cats and Dogs: The Revenge of Kitty Galore” is not so much a sequel to the 2001 film as ‘human’ screen time is severely limited, and, instead, we dive into a kid’s spy thriller that almost exclusively lives in the canine/feline world.

The homage paid to spy thrillers of the past will go right over kids’ heads, such as the opening credits ala James Bond, but should be easily recognized by most adults. The best scene involving Mr. Tinkles is a direct parody of “Silence of the Lambs” and ends up giving the film gravitas in kids’ minds, while providing chuckles to their parents. The new movie is more serious than its predecessor, and, yet, at the same time, not nearly as dark in its themes.

Language: None. The Lord’s name is not noticeably taken in vain and no profanities were heard.

Violence: Minimal and mostly limited to animals in fight scenes. Whereas, in the original “Cats and Dogs,” people were definitely placed in danger, the new film only implies the consequences of dogs driven insane.

Diggs’ failed mission from the beginning involved a human hostage situation, but was quickly resolved, and the only person ever in constant comic peril was Kitty Galore’s owner, Playland’s resident magician Chuck the Magnificent (Jack McBrayer).

There is a scene of a cat getting hosed with water that can only be superficially compared to real water torture. Kitty refers to “Cat Assassin” magazine, at one point, for her next operatives.

Overall, this is an inoffensive family-friendly film.

One of the leads confesses “No matter how hard I try, I mess up.” This echoes what human beings have been saying since the ‘fall’; essentially, that our nature doesn’t seem to let us do right. The Word of God has attested to this inescapable truth about us for thousands of years, as it also speaks of the cure.

“Therefore, just as sin entered the world through one man, and death through sin, and in this way death came to all men, because all sinned…” (Romans 5:12).

“What a wretched man I am! Who will rescue me from this body of death? Thanks be to God—through Jesus Christ our Lord!” (Romans 7:10).

“God made him who had no sin to be sin for us, so that in him we might become the righteousness of God” (2 Corinthians 5:21).

When the same character says that “the only one I can really trust is me,” we should know innately that this is not true. In the film, Diggs comes to trust and depend on his teammates to steer him right, and we cheer him on for doing this. How much better we would do if we followed God’s advice when he tells us to:

“Trust in the Lord with all your heart and lean not on your own understanding; in all your ways acknowledge him, and he will make your paths straight” (Proverbs 3:5-6).

“Cats and Dogs: The Revenge of Kitty Galore” takes the spy thriller genre as seriously as a kids' movie will allow and will appeal greatly to a young audience. Teens and adults without kids will find some amusement by the contemporary references and movie parodies, but will probably be bored, as though they have seen it all before—mainly because they have. This film is recommended only for younger kids and their very supportive parents. Note on the 3D version: The film apparently converted scenes to 3D as an afterthought and, as such, is not needed to enjoy this film.

Positive
Positive—This movie was very cute and actually really funny. I laughed out loud a lot. It’s refreshing to see a movie that is clean. It’s sad to feel like the only ones I can watch these days in this society are kid’s movies! Fun family flick.
My Ratings: Moral rating: Excellent! / Moviemaking quality: 4

Samantha Taylor, age 35 (USA)
Positive—This movie was great! Me and my husband just saw this movie. It was very funny. I think everyone should see it.
My Ratings: Moral rating: Excellent! / Moviemaking quality: 5

Comments from young people
Positive—Pretty good film! I watched it and enjoyed it! I haven't watched the first one in such a long time, though… this one is good! I would recommend it if you just want something light and fun and silly to watch for once!…
My Ratings: Moral rating: Good / Moviemaking quality: 4