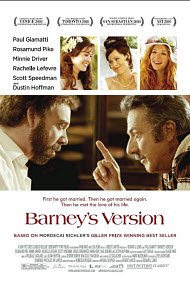 Compare to: TRUE LOVE—What is true love and how do you know when you have found it? Answer

father son relationships where the father is a terrible example

Is Jesus Christ the answer?

There is HOPE! Discover God’s promise for all people—told beautifully and clearly from the beginning. Watch it on-line, full-length motion picture.

Have you ever seen a gorgeous woman on the arm of a regular-looking, or even fairly unattractive man, and wondered, “How’d he get her?” Well, that’s pretty much the case in “Barney’s Version,” a film about a melancholy alcoholic whose best feature turns out to be the woman who adores him. Barney (Paul Giamatti), a Jewish man living in Montreal, produces television shows by day, and by night is known to frequent bars to watch his favorite sport, hockey.

He has terrible luck with women, until he meets his third wife, the love of his life. He only marries his first wife because he believes she is pregnant with their child (which turns out to be false); during the reception of his second wedding, he meets Miriam (Rosamund Pike), and is so enthralled with her that he chases her to a train station to get her phone number. Later, when he ends up divorcing his second wife (Minnie Driver—who he seemingly never really loved), he convinces the sweet and endearing Miriam to marry him.

contrast to goodness and righteousness

Although they live in a lovely home and have two children together, Barney remains a blubbering alcoholic who is not supportive enough to his wife. When she re-enters the workforce, after their children have gone away to college, she asks Barney to encourage her efforts by listening to her radio show. However, instead of listening in and being supportive, he finds himself at a sports bar and proceeds to get drunk. This is the beginning of the end for their marriage, as Miriam’s patience with Barney wears thinner and thinner.

Barney’s relationship with his father, played by Dustin Hoffman, is an endearing one, despite the crass nature of their discussions and the obvious crudeness of Hoffman’s character himself. When Barney learns of his father’s death, he is utterly heartbroken, as he and his father had a special bond. It is disturbing to note that Barney’s father dies at a brothel, as he was giving in to the most hedonistic temptations of his flesh, which he often encouraged his son to do as well.

The other major plotline in the movie involves Barney’s best friend, whom he had once been accused of murdering. Barney was drunk at the time of the incident and did not remember the details, but later pieces the events of the evening together in his mind and finally realizes what happened. The resolution of the events does not come until much later in the film, when the viewer can finally rest at ease knowing that the demise of Barney’s friend was not, in fact, Barney’s fault.

Miriam continues to help Barney through his messy life, even when the two are divorced, and Barney is suffering severely from Alzheimer’s Disease.

“Barney’s Version” is an interesting film, although there is no lack of objectionable content. Barney’s character is a perfect example of the kind of human being not to be like. Barney does not have much respect for the institution of marriage, and certainly doesn’t see marriage as a holy and binding vow before God, as evidenced by the scene where he chases after another woman (Miriam) during his own wedding reception! His father encourages him to sleep around and not settle down with a woman, and just give in to the desires of his flesh.

This is definitely the opposite of godly advice, and nothing like the advice the father gives to his son in the Proverbs. At one point in the film, his second wife is seen having an affair with his best friend. The content is definitely bad enough to live up to the film’s “R” rating.

The character of Miriam is, without at doubt, the most Christ-like example in the film. Her patience and understanding in dealing with Barney resembles the most famous passage in the Bible on love, 1 Corinthians 13.

Miriam and Barney are married for many years, and as time goes on it becomes clear that Barney is not nearly as polite or refined as Miriam. He also does not always support her or show his love for her, as well as she does for him. It is understandable, from a human viewpoint, that Miriam’s grace toward Barney begins to fade, as she sees her efforts not being reciprocated. From a biblical perspective, however, one should not abandon a marriage and disregard one’s vows before God, simply because the marriage has hit a rough patch. Miriam’s one flaw is that she gives up on the marriage, and it’s very sad to see Barney still relying on her in the end and erroneously believing they are still married, when in actual fact they are divorced—she is remarried… and he has Alzheimer’s Disease.

One wonders what a wonderful ending the film could have had if Miriam had persisted in the marriage and stood by Barney, even through the most difficult moments.