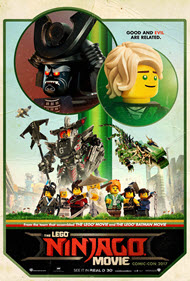 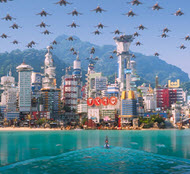 Children abandoned by their father 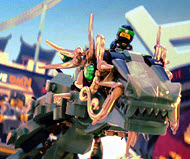 Dragons and dinosaurs—discover how they are connected 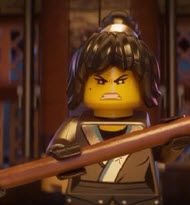 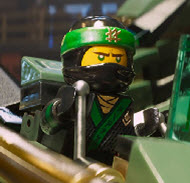 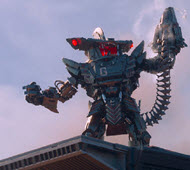 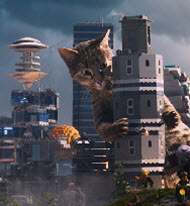 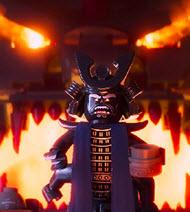 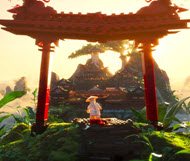 What would it be like to be the child of a feared super-villain? That’s where we meet Lloyd (voice of Dave Franco). People always choose to sit on the other side of the bus and write mean songs about Lloyd, simply because he’s the son of Garmadon (voice of Justin Theroux), Ninjago’s most feared baddie. But life’s not always so bad for Lloyd, he has a few friends, and they lead a secret double life. They may appear to be average high school students, but they are also secretly ninjas!

Under training by Master Wu (voice of Jackie Chan), these six Ninjas fight nearly every day to fend off Garmadon from taking over Ninjago. One day, Lloyd becomes so enraged with taking out Garmadon that he steals the sacred “ultimate weapon” to try and defeat him. Little does he know that this weapon will only cause Ninjago to get in further danger, this time from a bigger and furrier threat.

There are some things to like about “Ninjago.” Like the previous “LEGO” movies, “Ninjago” utilizes a tongue-in-cheek sense of humor that often hits its mark. Some references to old school, martial arts movies are nicely-placed and well executed. The animation is fun to watch, as usual, with the feel of a LEGO playset coming to life with exuberance and panache. A couple of fun, live-action elements make their way in as well, with entertaining results. The film paces solidly through its hour and 41 minute running time.

The vocal performances are lively at times. However, Theroux is the standout here. He balances a villainous tone with a sarcastically comedic tone. He makes for a very entertaining and somewhat memorable character. Chan gives a solid performance with a few surprising elements. On the other hand, Franco’s voice performance as the lead is fairly bland and doesn’t offer anything interesting.

On the downside, I found the story to be missing originality (for the most part) and character development. Some moments feel derivative and borrowed from other familiar movies and TV shows. The movie never allows us to see how Lloyd and his friends became ninjas in the first place. And while Lloyd and Garmadon’s story is given some depth, later on, we never really get to know any of the other ninjas. The other five are basically there to do little more than crack jokes here and there. The inclusion of Master Wu whistling “It’s the Hard Knock Life” from Annie and “Welcome to the Jungle” by Guns n’ Roses were odd choices.

The movie puts a positive emphasis on being unique and different. On one hand, this is a message that can apply to any agenda. However, I think the movie’s message is mostly aiming at overcoming peer pressure. The story encourages the idea that we may be much more than what others think of us. Lloyd may have a lot of the school and the city against him, but that doesn’t stop him from doing great things. The Bible encourages us to not let the world influence us, and to live as the man or woman God created us to be.

“And be not conformed to this world: but be ye transformed by the renewing of your mind, that ye may prove what is that good, and acceptable, and perfect, will of God.” –Romans 12:2

“I will praise thee; for I am fearfully and wonderfully made…” —Psalm 139:14a

The film also presents a moving example of family reconciliation. After spending months with a harsh and negative perspective of his father, Lloyd chooses to forgive him in a tender moment. By the movie’s end, Garmadon finds that being a dad is more important and more life-changing than world domination. In the meantime, a secret about Lloyd’s mom (voice of Olivia Munn) comes to light, and we witness a strong example of motherly love and sacrifice.

In addition, we see the usual display of bravery and teamwork. And the ninjas do put their lives on the line to try and save Ninjago.

Sexual Content: Virtually nonexistent. Some LEGO figures are seen wearing bathing suits in a pool scene. Garmadon has a silly joke about him using both his sets of arms to make it look like he’s “making out with two people”.

Language: No obscenities. A couple of times, we hear “Oh my gosh” and “what the heck?” Garmadon throws out insults such as “You’re a big stupid dumb-dumb” and “you smell like farts.” In a joke that might sail over the heads of some younger viewers, Garmadon says, “We are gonna have words. And you can bet some of those words are gonna have four letters.”

Drugs/Alcohol: LEGO umbrella-drinks are served at a party. Someone is shown holding an unknown beverage at one point.

Violence: A few scenes involve LEGO-based destruction. Martial arts and LEGO hand-to-hand combat are shown a few times. Robots break and buildings fall. Sharks are shot out of an engine and are shown chasing after various LEGO figures. Garmadon fires people out of volcanoes (we see the firing from a distance with some screaming heard). As payback for his harsh treatment of others, we later see the “fired henchmen” attempt to throw Garmadon into a constructed volcano. A furry foe attacks planes, brings buildings down, and even swallows (and vomits up) a LEGO person.

Other: While he takes a turn for the better, later in the film, Garmadon does start off rather cruel and heartless. When his son yells, “You ruined my life!” He answers, “That’s not true. How could I have ruined your life? I wasn’t even there.” The only real use of bathroom humor in the whole film is when Garmadon mentions he might need a “change of armor.”

That being said, I can’t say the same for “…Ninjago…”. Any real surprises here are either reused from the earlier installments, or already spoiled in the trailers (the giant cat would have made a neat surprise). While finding some heart and emotional oomph late in the game, the story isn’t anywhere near as clever or creative as the first two LEGO movies. Some elements borrow heavily from pop culture franchises, such as “Power Rangers,” “Teenage Mutant Ninja Turtles” and “Star Wars.” And, the character development leaves quite a bit to be desired.

But, at the same time, I have to applaud the creators of this movie. They have pieced together (pun intended) a family-friendly movie that has no gore, no real sexual content, no crude humor and no coarse language. Even Eastern mysticism and spirituality (which are common in movies like this) is just about completely absent here (a couple of ambiguous comments about “finding the power inside” and “the inner piece” are the closest the movie gets).

Some of the LEGO violence might be a little intense for very little ones. But besides that, this might be as clean a family movie as we might get nowadays.

Ultimately, if you are a fan of the previous “LEGO” movies, you might like this one. Just keep your expectations low, because this is no animated classic. But, it’s still a reasonably fun and entertaining diversion that I can safely recommend for families to see together.

Comments from young people
Positive—This is definitely one of the best movies I have ever watched. It was hilarious! The action was cool and the story was well-developed. It was fun seeing Lego people in action. Since I always liked Oriental culture and tradition, this was especially fun to watch. Some people might say the movie is Buddhist because Master Wu says that if you use your imagination all things will be possible, but it seems more like it’s just teaching people to use their imaginations (of which there is great lack today). There is no cursing, or using God’s name in vain, although a character says: “Your butt stinks!.” Over all there was a good friendship theme and even the “Buddhism” can be justified in “Whatsoever ye ask in my name, believing, ye shall receive.” I didn’t care for the rock songs throughout. Please watch this movie and let others know of its worth.
My Ratings: Moral rating: Better than Average / Moviemaking quality: 5
Valentino, age 14 (Italy)