for language throughout and some violence/bloody images. 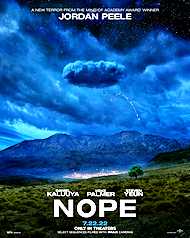 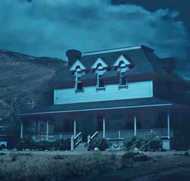 Human addiction to spectacles and Hollywood’s exploitation of this

Are we alone in the universe? 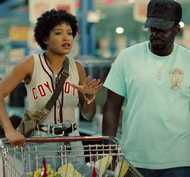 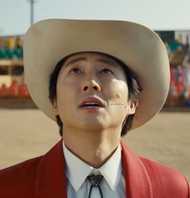 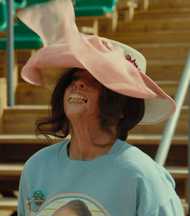 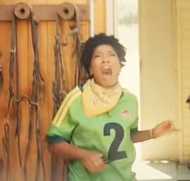 Otis Haywood Jr. (Daniel Kaluuya) (or “OJ” for short), and his sister, Emerald (Keke Palmer), are the proud representatives of their family’s horse training business, The Haywood Hollywood Horses. They serve as horse handlers. Unfortunately, though, things are not going so well, as the horses have been a bit temperamental lately (either that, or, as in the case of one incident on a movie set, people are not smart enough to listen to OJ and Emerald on how to approach a horse).

Back at the Haywood Ranch, things aren’t too fantastic either. They’ve had to sell some of their horses to a local amusement park just to make ends meet. One night, however, mysterious objects begin falling from the sky and knock out OJ’s father, Otis Sr., killing him. OJ finds this phenomenon very peculiar, but Emerald just chalks it up to a freak incident and wants OJ to let it go and move on.

Some time passes and the phenomenon occurs again. The lights begin to flicker, the music Emerald listens to turns off. OJ notices the horses are beginning to panic. Up in the sky! Is it a bird? Is it a plane? No, it’s a UFO!

OJ and Emerald realize it’s the find of a lifetime. Now all they need to do is find a way to get the “Oprah Shot” or the “money shot,” the video or proof of alien life that will make them rich for life. The question is: what will OJ and Emerald have to risk in order to get that shot?

“Nope” is now the sixth film Jordan Peele has directed or produced over the past several years. His films, apart from their entertainment value, always have some deep, political or philosophical messaging supporting them. For example, in the film “Get Out” the entire theme surrounding the film was racism, stereotyping, and interracial relationships. In fact, there were entire scenes within “Get Out” that were devoted to shouting out these themes to the audience. In another film, “Us” the message was about inequality and fairness. In the remake of the film, “Candyman,” Peele wanted to make a statement about the injustice between law enforcement and African Americans.

In this latest installment, “Nope,” as Mr. Assay from Plugged In, pointed out, the message is about our “toxic nature of attention and the insidiousness of our human addiction to spectacle.” In essence, in the film, we watch as characters who should be running for their lives, gaze up at the skies thinking about how they can best cash in on the opportunity of a lifetime. Greed takes precedence over common sense in this film, and it leads to many characters’ demise. Speaking of violence…

One thing that Jordan Peele is never shy about including in his films is violence. In “Nope”, while he doesn’t take the violence to the extremes he might have in films like “Us” or “Candyman,” there was enough on screen to make anyone nauseous (such as a scene where a monster is digesting people alive [yes, you read that right]). The body count is far higher than I expected, especially for a sci-fi film.

There is one thing I can’t forgive and can’t forget about that has remained constant in many of Peele’s films, and that is Peele’s misrepresentation of Christianity and Scripture to push his own messaging forward. “Nope” opens with this verse…

“I will pelt you with filth, I will treat you with contempt and make you a spectacle.” —Nahum 3:6

Mr. Peele, please do not continue to take Scripture out of context and use it in your films without understanding the full meaning, especially using Scripture in regards to a film about *SPOILER AHEAD* an Alien monster who comes to Earth whose sole purpose is destroy and to eat people. *END SPOILER*

To the film’s credit, the cinematography is incredibly strong (as is the case in many of Peele’s films). Keke Palmer’s Emerald is the much needed comedic relief from time to time in the film and her chemistry with lead, Daniel Kaluuya, is spot on. The score for the film is relatively good and the pacing is strong, though there were times I felt the second act tended to slow down in parts.

VIOLENCE: Extreme. *Note this is not a complete list of every instance that occurred.* *MAJOR NECESSARY SPOILERS AHEAD* We witness a dead character’s leg’s sticking out (blood nearby). A man is hit in the head by an object and severely bloodied (we see blood all over his face and arms and his speech is slurred). A horse gets spooked on set and almost kicks some people. There is a story about an chimpanzee who wreaks “havoc on set.” Later, we watch what happened—punching, biting, ripping a girl’s face off and jumping on people, graphically killing them (most of it off screen, but some can be seen. We do, hear the screaming). In this same scene, a young boy watches as the ape is killing the people on set. A young boy is punched by a man who got startled. A man is thrown to the ground. A horse is pulled into the clouds by the monster. We see some animals eating each other on film. A chimp is shot to death (we don’t see the actual shot but we see his brain’s splatter).

**SPOILER** We learn the UFO is a monster and watch as people are sucked into the air by the monster and eaten by it. In one scene, the camera shows people being digested by the monster, screaming for help. *END SPOILER*

A full-size plastic horse gets thrown through the inside of a windshield almost hitting a passenger. A motorcycle rider gets shocked and falls off his bike. Some characters are tossed in the air. A character dies. A monster explodes. Blood rains down from the sky (it is graphic in nature as there is a ton of blood).

SEXUAL CONTENT: Emerald (apparently a Lesbian or Bisexual) is seeing a female therapist, and explains, “I f**k one on occasion.”

NUDITY: Emerald is seen wearing a midriff and cleavage baring outfits at times.

Greed is an underlying theme that seems to be present in “Nope.” OJ and Emerald start off in the film suffering from financial woes with the Haywood Ranch. When the alien approaches, instead of using common sense, like calling the authorities to handle the situation, they figure they should cash in on the opportunity.

Whoever loves money never has enough; whoever loves wealth is never satisfied with their income. This too is meaningless. —Ecclesiastes 5:10

The reason the Bible cautions Christians so much about wealth, in its many forms (not just money by the way), is because excessive wealth, left unchecked, leads to sin.

“Nope,” simply put, is terror in its purest form. The violence in this film is far beyond what is acceptable, the vulgar language and crudity is extreme, and honestly there is simply no reason, whatsoever, for any discerning Christian, teen or adult, to pay any mind in seeing “Nope.” Do yourself a huge favor and stay as far away from this film as possible. I leave you with this…

Secular Movie Critics
…Every so often an obviously talented person makes a bad movie, and that’s what we have in “Nope.” The talent is there, the movie is dead on the screen. …a slow, dull and repetitive disappointment…
Mick LaSalle, San Francisco Chronicle
…“Nope” doesn’t have a plot so much as a series of happenings that spill out in an impressionistic and arbitrary way. Logic often takes a back seat, and that has the unfortunate effect of lessening our involvement. …
Owen Gleiberman, Variety
Jordan Peele’s followup to “Get Out” and “Us” is a bit meh… There is something clotted and heavy about this film, with sadly not enough of the humour for which Peele justly became celebrated in his double-act days with Keegan-Michael Key. It’s not the positive response I wanted to have. …[2/5]
Peter Bradshaw, The Guardian (UK)
…The parts of jordan peele’s latest are greater than the whole… There’s no shortage of ideas and set pieces on display, but those pieces just don’t fit together… It just doesn’t work. …
Alonso Duralde, The Wrap
…fails to tie everything together with a resounding final act. …
Kyle Smith, Wall Street Journal
…The movie is a bit long, and the culmination overstays its welcome. …
Johnny Oleksinski, New York Post
…Spectacle triumphs over substance… A handsomely mounted sci-fi thriller has trouble saying what it wants to. …Nope’s concluding minutes don’t bring the film to any satisfying place; it hurries to an ending in a way that suggests many minutes, if not hours, of movie left on the cutting room floor. …
Richard Lawson, Vanity Fair
…A “limping, would-be romp”… isn't quite horrifying or entertaining or suspenseful enough… [3/5]
Caryn James, BBC
…not prime Peele by any means…
Soren Andersen, The Seattle Times