Meaning: the home of Amon (a heathen god)

No is another name for Thebes, the ancient capital of what is called the Middle Empire, in Upper or Southern Egypt

“The multitude of No” (Jeremiah 46:25) is more correctly rendered, as in the Revised King James Version, “Amon of No”, i.e., No, where Jupiter Amon had his temple.

In Ezek. 30:14, 16 it is simply called “No;” but in verse 15 the name has the Hebrew Hamon prefixed to it, “Hamon No.” This prefix is probably the name simply of the god usually styled Amon or Ammon.

It was the Diospolis or Thebes of the Greeks, celebrated for its hundred gates and its vast population. It stood on both sides of the Nile, and is by some supposed to have included Karnak and Luxor. In grandeur and extent it can only be compared to Nineveh.

It is mentioned only in the prophecies referred to, which point to its total destruction, because of the many evils committed there.

I will make Pathros desolate,
Set a fire in Zoan
And execute judgments on Thebes [No].

I will pour out My wrath on Sin [Pelusium],
The stronghold of Egypt;
I will also cut off the hordes of Thebes [No].

I will set a fire in Egypt;
Sin will writhe in anguish,
Thebes will be breached
And Memphis [Noph] will have distresses daily.” —Ezekiel 30:13-16 NASB

Memphis was first taken by the Assyrians in the time of Sargon (Isaiah 20). It was afterwards “delivered into the hand” of Nebuchadnezzar and Assurbani-pal (Jeremiah 46:25-26). Cambyses, king of the Persians (525 B.C.), further laid it waste by fire.

Its ruin was completed by King Ptolemy Lathyrus (81 B.C.).

The ruins of this city are still among the most notable in the valley of the Nile. They have formed a great storehouse of interesting historic remains for more than 2-thousand years. Thebes is located with the modern city of Luxor, Egypt.

Site of ancient No (Thebes)—satellite view 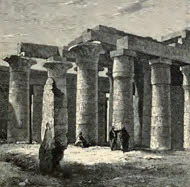 A Christian traveler to the site in the 1800s recorded his impressions and provided pencil sketches of what he saw.

“As I wandered day after day with ever-growing amazement amongst these relics of ancient magnificence, I felt that if all the ruins in Europe, classical, Celtic, and medieval, were brought together into one center, they would fall far short both in extent and grandeur of those of this single Egyptian city.

…Willing slaves to the vilest superstition, bondsmen to form and circumstance, adepts in every mechanical art that can add luxury or comfort to human existence, yet triumphing abroad over the very Scythians, captives from every quarter of the globe figuring in those long oblational processions to the sacred shrines in which they delighted, after returning to their native Nile—that grave, austere, gloomy architecture, sublime in outline and heavily elaborate in ornament, what a transcript was it of their own character!” —Rev. Dr. Samuel Manning, LLD, The Land of the Pharaohs (1878).

In the 8th century B.C., the biblical prophet Joel predicted,

“Egypt will become a waste,
And Edom will become a desolate wilderness,
Because of the violence done to the sons of Judah,
In whose land they have shed innocent blood.

But Judah will be inhabited forever
And Jerusalem for all generations.” —Joel 3:19-20 NASB