for some sensuality, language, thematic elements and smoking. 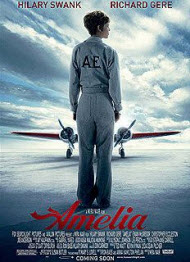 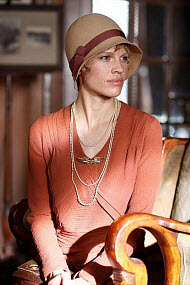 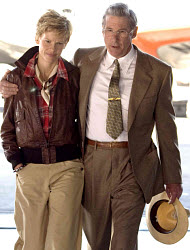 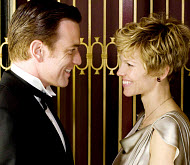 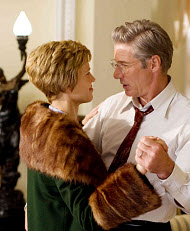 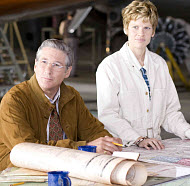 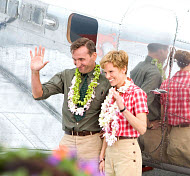 “Defying the impossible. Living the dream.”

This film is based on the books East to the Dawn by Susan Butler and The Sound of Wings by Mary S. Lovell.

Amelia Earhart has remained a legendary fascination for over 70 years. While the mystery of her disappearance has certainly added intrigue to her status, Earhart was also an extraordinary woman and pilot who helped pioneer the possibility for women to become successful at male-dominated occupations. Because of her contribution, it’s quite disappointing that this film has been so limitedly distributed. The original assigned reviewer, Sheri McMurray, did not have a local showing, and a drive to the opposite side of the city was required for my viewing.

The movie begins with Amelia, embarking on her flying career as the first woman to cross the Atlantic Ocean. Because of prejudices, Amelia is forced to simply remain a passenger, while two men pilot. Even though her reputation flourishes, this false achievement weighs heavily on Amelia’s conscience. Undaunted by the obstacles in her way, she remains persistent about piloting her own plane, as she strives to break records. Aggressively helping Amelia advance her career is George Putnam (Richard Gere). As the two spend increasingly amounts of time together, they begin an affair. After turning down several proposals from the love-stricken man, Amelia finally agrees to marry Putnam. Although she does agree, she makes it clear that fidelity and obedience are not part of the agreement. Over the course of several years, George’s devotion to Amelia and her career only grows. While she is appreciative of her husband’s work, Amelia’s first love remains flying, and she also begins an affair with Gene Vidal (Ewan McGregor). However, in the last years of their marriage, Amelia has a renewed devotion to her husband and decides to retire from flying after a solo trip around the world.

Hilary Swank is very particular in the roles she takes on. While this results in her not being in many movies, the ones she does star in are almost always spectacular. Her resemblance to Earhart is striking, and her characterization and demeanor are almost exact. Her pairing with Gere is solid, and their screen time is believable. Their chemistry was of the utmost importance, since the film mostly focuses on Amelia and George’s marriage. The film’s characters are well written, with glimpses into Amelia’s kindness and George’s fierce determination to see his wife succeed.

The cinematography is beautiful. A well-written monologue is narrated and dazzling scenery given, as Amelia flies through the different counties. The breathtaking landscapes make it easy to understand her enormous love for soaring through the air. Being outside in nature can serve as a wonderful reminder of God’s majestic work. For God to have created the whole world and its beauty demonstrates his incredible power. And within all this vast beauty, his children matter the most to him. King David wrote of this in Psalm 8:3-4:

When I consider your heavens,
the work of your fingers,
the moon and the stars,
which you have set in place,
what is man that you are mindful of him,
the son of man that you care for him?

Credit should be given to the writers (Ron Bass and Anna Hamilton Phelan) for not taking the usual Hollywood liberty in dramatizing Earhart’s story. Everything remains quite accurate, and the ending is excellently done. While the story’s true, some heart is missing since strongest possible connection to Earhart wasn’t created. The audience is never given the chance of growing alongside Earhart and witnessing how her interest for flying was established or how the root of her passion was planted. Only two flashback scenes are briefly provided to account for Amelia’s allure for flying. This would be the only potential drawback of the film.

The film is rated PG, and parents should use discretion when considering their young children in seeing the film. Adult themes such as adultery and remaining committed run through the film. While there are no sex scenes, they are implied, and she is shown kissing another man who is not her husband. In one scene, her skirt is slightly pushed up and one can see her garter belt. The Lord’s name is profaned four times (3 GDs and 1 “for Christ’s sakes”); there are also several uses of vulgarity (d*mn, h*ll, ass, a**hole).

With the above reservations, I do recommend the film. However, I do not believe very young kids should see it, and they’d likely find the film boring. Like a flight, “Amelia” was at times uneventful. Ultimately, however, it reached its destination in providing a spectacularly-acted glimpse into the life of Amelia Earhart.

Positive
Positive—There were no sex scenes in this film. I remember once hearing the Lord’s name taken in vain and only one minor swear word. Amelia did have some sexual sin in her life and the movie represented this. Although it was not in full view, there were references to it. The rest of the film was enjoyable, even exciting in some parts. The actress had a stunning resemblance to Amelia and that was interesting to see. The clothing worn from that era was also very interesting to look at. The planes that she flew was another strong point of the film to see. The movie was mostly just a drama of her life with her husband, highlighted by her most famous flights. I think it could have been better if it would have covered her life from her childhood and told how she got started in flying.
My Ratings: Moral rating: Better than Average / Moviemaking quality: 3

CJ Piarowski, age 50 (USA)
Positive—Our reviewer’s comments are spot-on. However, I see the moral rating as above average, because Amelia’s infidelity is portrayed as the hurtful sin that it is, rather than the common portrayal as empowerment of a self-reliant woman. Furthermore, her husband’s love and forgiveness is inspiring, without making him appear emasculated.
My Ratings: Moral rating: Better than Average / Moviemaking quality: 3½

Brian Schacht, age 62 (Canada)
Positive—Amelia is the touching true story of Amelia Earhart, the first woman to fly across the Atlantic, inspiring women from around the world to achieve their dreams. I have to say, I was very impressed with Amelia. While the movie has some inappropriate content (minor language and some innuendo) I enjoyed the movie thoroughly. The acting brought to us by Hilary Swank as Amelia is superb. She shines as the character and makes it very exciting. Richard Gere, an acting genius, is forced to don an New Yorker sounding accent that takes away from usual charm, but otherwise, he is fantastic as Amelia’s husband. Considering the trend to demonize husbands in movies such The Duchess or The Women, it was good to see Gere’s character as a good husband, even when Amelia betrays his love.
Please note: This is not a family film. I would recommend it for families with teenagers or as a could date night for husbands and wives. Go out and enjoy it.
My Ratings: Moral rating: Average / Moviemaking quality: 4½

Joanne, age 43 (USA)
Comments from young people
Neutral—Amelia Earheart was quite a fascinating woman. The movie was slow in some parts and did not have a happy ending, but if that was changed, it would not have been so true, would it? I would not see this movie again, but I recommend it to those who are intrigued by Amelia Earheart and are Hilary Swank fans.
My Ratings: Moral rating: Better than Average / Moviemaking quality: 4½

Carrie Rickey, Philadelphia Inquirer
…The aviatrix loses her personality in this superficial film. … we get little of the woman behind the smile. Where is the steely force that drives grand ambition, the fears, the flaws?…

Betsy Sharkey, Los Angeles Times
…old-fashioned, star-powered bio-mush… To say that “Amelia” never gets off the ground would be an understatement; it barely makes it out of the hangar. Handsomely mounted yet dismayingly superficial…

Justin Chang, Variety
…The movie has strong production values, but the drama never delves too deep into getting to know the person of Amelia and has a non-Christian, adulterous view toward marriage. …

Movieguide
…Considering the talent involved, Amelia should have been better. …a quintessentially American story, meant to be inspiring but which instead comes across as empty. …