The Haunting in Connecticut

for some intense sequences of terror and disturbing images. 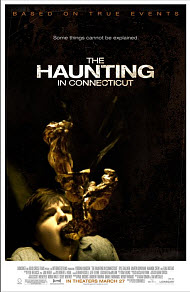 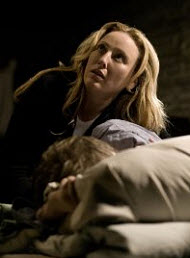 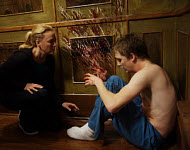 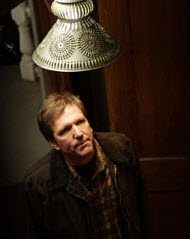 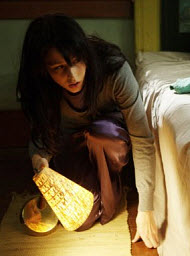 Spirits in the Bible

“What if the only explanation for what you saw was unbelievable?”

Based on a “true story,” “A Haunting in Connecticut” centers around Sarah Campbell (Virginia Madsen) and her son Matt (Kyle Gallner). Matt suffers from a progressive form of cancer that requires daily treatments from a hospital more than 300 miles away. The long periods of driving only compound Matt’s illness, and, in response, Sarah decides to rent a house in Connecticut closer to the hospital.

Restricted by financies, Sarah is delighted when a spacious house is within her family’s price range. Sound too good to be true? That’s because it is. Sarah learns that the house was once a funeral parlor which has kept the house affordable and on the market. However, this factor does not delay the Campbell family from moving into the eerie house. The honeymoon doesn’t last long, as Matt begins to have dreams and hallucinations about the previous owners of the house and their perverse endeavors to contact and preserve the dead, the mortuary abounding with viable subjects.

One dream in particular leads Matt to a locked doorway where he glimpses through the glass the grotesque procedures enacted upon the dead by the director of the funeral parlor, Ramsey Aickman. Upon waking, he opens the door and the family discovers the room was utilized to embalm corpses, much of the equipment left after many years. From this realization, the drama unfolds, complete with photos of the dead, séances, and a tortured family history.

Surprisingly, this film is offensive both spiritually and morally.

First and foremost, the film delves heavily into occultist practices including séances and necromancy. The movie is very graphic in the representation of both.

For example, during one of Matt’s visions, we discover that a young apprentice to the funeral home owner, Jonah, was a séance medium. It is through Jonah and his experiences as a medium that the film explains what necromancy and ectoplasm are and how one accurately participates in both. To have a more affective séance, Mr. Aickman mutilated the bodies further and as a result, Jonah conjured ectoplasm, a violent and physical manifestation of successful contact with the dead. In a disturbing image, as seen on the movie poster, this spiritual substance begins to flow out of his mouth. In the film, ectoplasm is considered to be the prized payoff of a successful and powerful séance.

Such paranormal and demonic activities are in direct opposition to the ways and commands of God. In Leviticus, God warns against the practice of séances and the use of mediums.

“Do not turn to mediums or seek out spiritists, for you will be defiled by them. I am the LORD your God” (Leviticus 19:31).

The prophet Isaiah echoes the same urgency to avoid conjuring spirits and urges his people to consult God in all matters.

“When men tell you to consult mediums and spiritists, who whisper and mutter, should not a people inquire of their God? Why consult the dead on behalf of the living? To the law and to the testimony! If they do not speak according to this word, they have no light of dawn” (Isaiah 8:19-20).

Fundamental moral themes prevalent in the film are control and lying. Sarah is a mother desperate to hold onto her son in the face of sickness and death. When Matt’s illness peaks or worsens, she often secludes herself with a rosary to pray. She is shown pleading with God to not take her son, going—so far as to authoritatively tell God that He can’t have Matt. Such instances, while very human ignore the sovereignty and goodness of God.

Sarah believes that her son is better off under her care than God’s. These illusions of control set one up for disappointment and provoke a view of God as a villain. In the Sermon on the Mount, Jesus urges us not to worry and illustrates this point by telling of the Father’s care for even the littlest creatures, displaying His great sovereignty.

“Look at the birds of the air; they do not sow or reap or stow away in barns, and yet your heavenly Father feeds them. Are you not much more valuable than they?” (Matthew 6:26).

The fight for control is also illustrated in Sarah’s husband Peter’s alcoholism. Peter and Sarah live in the fantasy that human will alone can conquer addiction. After coming home in a drunken stupor, Sarah tells Peter, “Your family needs your strength, not your self pity.” As Christians, we know that repentance from addiction or any sin is only possible with Jesus Christ and His Holy Spirit.

A primary illustration of lying in this movie is how the characters try to sympathize with evil. Unfortunately, this is most strongly shown in the “Reverend,” played by Elias Koteas. Matt first meets the Reverend in the hospital, while undergoing another cancer treatment. After enduring many freakish encounters with the demonic, Matt and Sarah agree to have the Reverend exorcise their home. Upon entering the home and sensing the supernatural activity, the Reverend concludes that Jonah, the visualized ghost and apprentice of the funeral parlor owner, simply wants to be freed from the former mortuary that has become his soul’s prison. Furthermore, the Reverend believes that Jonah wants to free the other souls that died and endured perverse actions at the hands of the owner.

This sympathy for the dead is severely misplaced and mistakenly puts one face to face with the enemy. Jesus tells us that the enemy is the father of lies, and the idea that demons disguised as the dead deserve sympathy is a major lie.

One final point that disturbed me was Sarah’s concluding quote,

“Everyone says that God works in mysterious ways, they never tell you how mysterious those ways are. Consider yourself warned.”

I find this quote to be accusatory of God’s good and holy nature, somehow implying that He is capable of evil. The Bible tells us that the Lord works things for good for all that love Him and that God does not tempt. By my estimation, the mother’s quote seems to imply the opposite, painting a picture that God is a big guy on a power trip waiting to strike us down at any time, or that God somehow orchestrates evil as a means to reach good.

Good points about the movie are the non frequent use of profanity. However, the Lord’s name is taken in vain two times; “God” is said in vain once, and there is one other reference to the Lord. The acting is also very convincing. and the special effects noteworthy. In the end, good does triumph over evil, yet no glory is given to God, and there is no mention of the name Jesus.

Overall, this film is not worth your money or time. Though it is thought-provoking for a mature audience, the spiritual and moral compass does not point north.

Negative
Negative—I just got back from watching this movie with my husband. Having lived in houses where there were demonic presences, I was interested to see what this movie was like, being that it is based on a true story… It is definitely a very demonic movie with comments about “God” and even scripture, yet NO mention of Jesus Christ. The reverend tries to get rid of the “ghosts”—through unbiblical ways, instead of just commanding them to leave in Jesus' name. Instead, he goes through some unbiblical practice of getting rid of the “ghost’s” ashes and that is supposed to resolve the problem. Of course, it doesn’t, and, in the end, the house is burned down.

This movie does not glorify the Lord, instead, it gives the message that we can deal with demons without His help. I would not recommend this movie.
My Ratings: Moral rating: Extremely Offensive / Moviemaking quality: 4

Sarah-Jane Rishwain, age 24 (USA)
Comments from young people
Neutral—This movie was very interesting. It does have some religious aspects to it, and it was a good movie, and it should just be left at that. It is not a movie for people who are not yet strong in there faith or if you’re a jumpy person. It was scary!!!…


Max, age 17 (USA)
Positive—In the movie, the reverends advice to young Matt comes from Psalms 23:4, “though I walk through the valley of the shadow of death, I will fear no evil.” The controversy over whether this movie is positive or negative comes from the fact that he does not complete the verse “for You are with me, Your rod and Your staff, they comfort me.” Jesus isn’t mentioned at all. Though the movie isn’t 100% accurate biblically, the warning it gives at the end still teaches a valuble lesson: Spirits are real, and God does work in very, very mysterious ways. The whole movie reminded me of a song by Matt Redman, and made the lyrics all the more powerful: “and I will fear no evil, for my God is with me, and if my God is with me, whom then shall I fear?” The bible says “the one who fears is not made perfect in love” (1 John 4:18), therefore not fearing is a very important part of my relationship with God. God is with you, whoever you are, and I believe if you pay attention to this movie’s message, you’ll find that your faith is stronger and your fear is less.
My Ratings: Moral rating: Average / Moviemaking quality: 4½