for some sequences of intense action violence and frightening images.

Reviewed by: Elisa A. Walker
CONTRIBUTOR 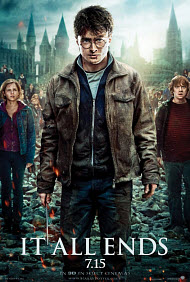 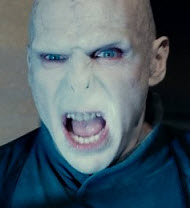 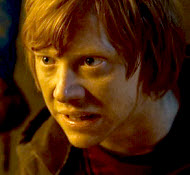 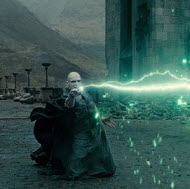 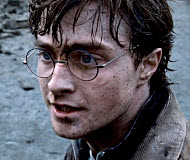 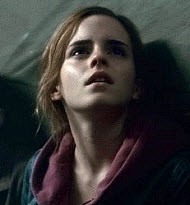 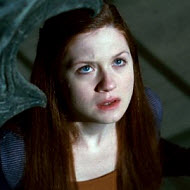 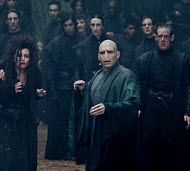 “Neither can live while the other survives” The prophecy that started it all is finally being fulfilled.

In the epic finale, Harry confronts his fate and faces Voldemort (Ralph Fiennes), once and for all. Part 2 picks up at Shell Cottage where Harry (Daniel Radcliffe), Ron (Rupert Grint) and Hermione (Emma Watson) plan to find the last of the Horcruxes, which eventually leads them back to Hogwarts, where it all ends. Filled with action, heart, and an epic conclusion, Part 2 is one Potter film fans don’t want to miss.

As with most of the HP films, cussing and sexuality are, for the most part, non-existent. There were a handful of curse words: h*ll, d*mn, bloody, and b*tch. There were two brief kissing scenes, but they didn’t come off as sex-crazed, it was more so that the characters knew they would probably die and were saying goodbye. There is also a scene when Harry, Ron and Hermione jump into a lake and need to change, so you can see Harry and Ron shirtless, but again, it’s not sexual, they just need to put dry clothes on.

Violence can be seen throughout most of the movie, most of it is what you would typically see in a PG-13 super hero movie, but there are, at least, two instances where it was a little gruesome. Good vs. Evil is a huge theme, in this movie especially, and good morals (such as, sacrifice, true friendship, bravery, not compromising, etc.) are displayed.

This movie, like all the other Potter films has magic in it; in my opinion, this magic is used as a tool (for good or evil), but I do know (from previous reviews and personally) that people feel very strongly about the issue of magic. The Christian community is divided, some think it goes against Scripture and others either think it’s a different type of magic than the Bible mentions, or since it’s fiction and doesn’t directly glorify it, it’s acceptable. To me, this issue is not cut and dry, and those for or against it should not be condemned; it’s a personal matter, like those who do not think drinking is wrong, but some think it’s a sin—everyone has their own struggles and liberties. So for those of you that are against magic, then do not see this film, it will only stumble you, for those of you that are fine with it, then enjoy it.

Another prominent spiritual issue that many Christians before me have written or spoken about is the similarities that Harry shares with Christ—whether these similarities are purposeful or accidental, many believe they are there. ***SPOILER ALERT*** Harry willingly lays down his life, without hate or fear, he knows his fate and accepts it bravely. When his friends offer to go with him, he refuses, and basically tells them that he has to go alone. Most of the students and teachers at Hogwarts help Harry, Ron and Hermione fight the Death Eaters (the bad guys) even though they know they’re outnumbered and will probably be dead by morning. Also, at one point, Neville (Matthew Lewis) is tempted by Voldemort to join him and live, but he refuses and is determined to not go down without a fight.

But the best display of good prevailing over evil is finding out that Snape, although thought to be purely evil and hateful, did everything in his power to protect Harry, and, in the end, lays his life down for his cause. ***END OF SPOILER***

Whether these are reaches or not, it’s what I saw in the characters, and I really appreciated the morality portrayed. John 15:13 definitely rung a bell: “Greater love hath no man than this, that a man lay down his life for his friends” (KJV). A good chunk of the characters spend most of the movie doing this very thing.

Author Stephen King made a comment regarding Harry Potter that I thought sums this up well, “Harry Potter is about confronting fears, finding inner strength and doing what is right in the face of adversity.”

Quality of the film

The actual quality of the film is spectacular, the actors are very believable, the action is breathtaking, and the battle sequences are awesome. They did an amazing job bringing the book to life, and, although some fans may be disappointed that they leave out certain things in the book, it’s just not possible to fit a 700-page book into two hours. The books, for the most part, are usually much better than the movies, because authors don’t have a page limit or time constraint. Part 2 is a good, quality, action-packed film, and I highly recommend seeing it in IMAX 3D—it’ll blow you away!

If this film didn’t have magic in it, I honestly believe that there wouldn’t be any reservations for people seeing this film—cussing, sexuality and violence are all kept at bay. You may have noticed above that I rated this film Average, even though the other films have been rated Offensive; I did this because, as stated above, people are split on the issue, and neither side should be condemned. So if you are okay with the above reservations, then you will enjoy the last installment, you will laugh, cry, be on the edge of your seat, and feel satisfied at the end. Mischief is managed, and all is well.

Editor’s Note: As usual, please be aware that the volunteer reviewer of this film is not a staff member of Christian Spotlight™, and comments made in the review are those of the reviewer alone, and do not necessarily reflect the opinions of our ministry. Lest there be any doubt, please understand that we do not recommend any of the “Harry Potter…” series, due to the fact that, although they are clearly fiction, they entirely involve both heroes and villains alike continually using witchcraft, wizardry and other occult practices (some clearly based upon real occult symbols, terminology, names, and practices)—and portray most of these in a fun and positive light, quite contrary to God’s Word. Furthermore, we are concerned that a small percentage of impressionable and emotionally vulnerable young people will, as a result, become easier prey for the growing number of real witches, Wiccans, neopagans, Satanists or other occultists seeking new initiates and offering these young people not only friendship as outcasts with shared interests, but, also, the possibility of achieving some personal power or self-realization through enchantments, incantations, divination, conjuring spirits, curses, supposed healing, worship, etc.

Is the Harry Potter series truly harmless?
Ever since the popularity of JK Rowling’s first book took hold, the debate rages. What is a Christian to think of the Harry Potter worldview and philosophies? Is there anything to be concerned about?

Positive
Positive—I enjoyed the movie. It was actually as good as the book (though not the same) for the storyline that it covered. It was PG-13 for the violence, but was unobjectionable otherwise. I especially liked the message of love and the obvious statement that good was more powerful than evil. Great wrap-up, and 3D was worth it!
My Ratings: Moral rating: Average / Moviemaking quality: 5
—Trina, age 43 (USA)
Positive—The part where Harry Potter is heading down toward the Forbidden Forest to meet his Arch-Nemesis (Voldemort) face-to-face is quite moving and emotional. Harry knows he is going to die,, and he is not afraid to back down to complete his ultimate mission to save other people he loves from evil. Surely, even Christ has completed his ultimate mission for our sins,, and he didn’t even back down.
My Ratings: Moral rating: Better than Average / Moviemaking quality: 5
—John, age 24 (USA)
Comments from young people
Positive—I was really impressed with the final film! I was also surprised that there were good morals in the movie. Yes, there’s a dragon in the beginning of the movie, I couldn’t find anything offensive about this movie besides the magic or people saying “Bloody” or “Bloody h***”. There’s a decent amount of violence, not too disturbing, and barely any swear words, as I recall.

***SPOILER ALERT*** When Harry is at King’s Cross (in his dream) he finds a bloody, whimpering creature, (which represents a poor soul) under a bench whimpering, and Dumbledore approaches him and tells Harry that he can’t help the creature. The creature looks like Voldemort, but smaller. The message was that Voldemort damned his soul by murder, etc., and is suffering and tells Harry that he can’t help him, because he’s already damned. It reminded me of Hell, once you’re in, you can never get out. ***END SPOILER***

I liked the movie very much and liked it even more when they had good morals in it. I rate it, not offensive, but “average” because of the good points of the movie, and because there wasn’t much offensive about it. “Harry Potter and the Deathly Hallows part II” is, in my opinion at least, the best Harry Potter movie! Enjoy, if you see it.…
My Ratings: Moral rating: Average / Moviemaking quality: 5
—Jessica, age 17 (USA)
Positive—This movie is great! I saw it on opening day and am going to see it again today. The only thing that made it PG-13 was the violence, especially ***SPOILER*** the part where Nagini kills the Half-Blood Prince ***END SPOILER***.

Besides that, there was a highly emotional scene after the battle when you find out who died. Other than that, it is an awesome film with great morals. I highly recommend 3D for this movie, as well.
My Ratings: Moral rating: Better than Average / Moviemaking quality: 5
—Claire W, age 14 (USA)

Sorry, no other viewer comments received yet. If you have seen this movie and would like to share your observations and insights with others to be posted here, please contact us!