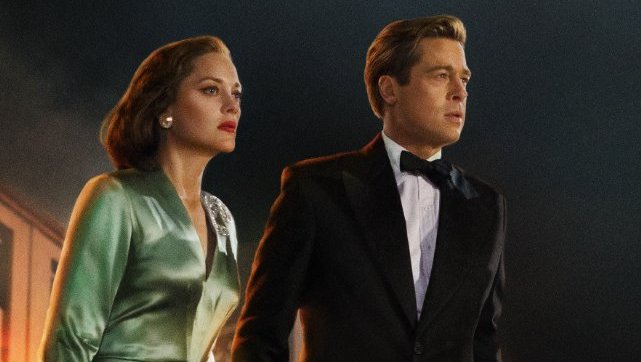 for violence, some sexuality/nudity, language and brief drug use. 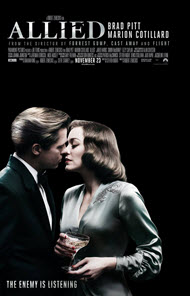 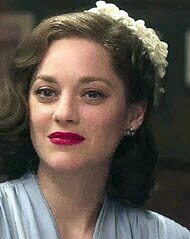 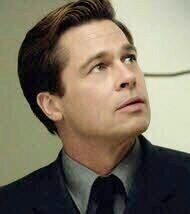 LESBIAN—What’s wrong with being Lesbian? Answer
Homosexual behavior versus the Bible: Are people born gay? Does homosexuality harm anyone? Is it anyone’s business? Are homosexual and heterosexual relationships equally valid? 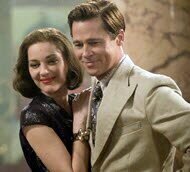 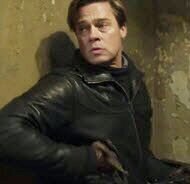 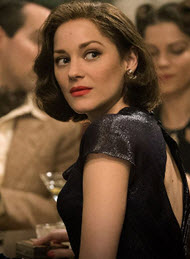 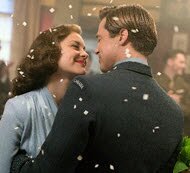 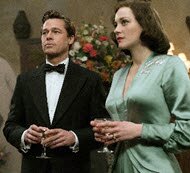 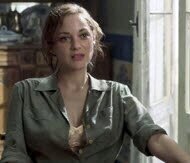 “The enemy is listening”

One year after director Robert Zemeckis took us on a dizzying journey in “The Walk” he delivers “Allied,” a romantic thriller set in the midst of WWII. Brad Pitt plays Max Vatan, a Canadian intelligence officer who is sent on a mission with French Resistance fighter Marianne Beauséjour (Marion Cotillard) to assassinate a German ambassador in Casablanca. But there is more to tell. This duo has to pose as a married couple, and they have to give an Oscar® worthy performance to outwit their enemies (I just had to throw that in).

As Max and Marianne continue to work together, they discover that they make great partners for each other both in and outside of their work and fall madly in love. The couple eventually get married, move to England, and have a child. As the war continues to march forward, though, Max is hit with some startling news. The English Special Operations Executive informs him that Marianne is suspected of being a German spy. But the bad news gets even worse. If it is proved that Marianne is in fact a German spy, Max needs to execute her or be hanged for high treason. Devastated by this news, Max sets out to prove that his wife is not a spy. But as he begins the hunt for the truth, the plot thickens, questions arise, and many lives become gravely endangered.

Over the years, Robert Zemeckis has proved himself to be quite unpredictable when it comes to what film he will make next. From “Forrest Gump” to “The Polar Express” and “The Walk,” it is always hard to tell what the next project will be from this legendary director. However, “Allied” is not quite so legendary. In fact, it is one of the weakest films I have ever seen from Zemeckis. It is obvious that everyone involved in this project wanted it to be the next big and grand romantic war thriller. The end result, though, was weak direction, poor writing, and a very underdeveloped plot.

I did enjoy the performances from both Pitt and Cotillard, and the cinematography is beautiful, though, at times, some of the visuals and backdrops seemed rather fake. Alan Silvestri’s score is stellar as always, and both Pitt and Cotillard have some screen chemistry. The story itself is intriguing, but I felt it wasn’t completely thought out when transferring the script to the screen. In the end, there are no dramatic climaxes, few thrills, and the conclusion feels like a complete fallout. “Allied” is fairly entertaining, but it is certainly a slow two hours, which you do not want to see from a WWII thriller.

The “R” rated content is rather heavy, but scattered, in “Allied.” There are a handful of sex scenes involving both married and unmarried couples. One scene involves an unwed couple having sex in a car. We see them begin to disrobe, witness some movements, and catch a brief glimpse of some rear male nudity. It appeared that this encounter got the woman pregnant before the couple got married. Another scene shows a married couple in bed, clothed, and the man’s wife straddling him. They’re interrupted by a phone call, but the wife decides to perform oral sex on the man as he takes the call. It is merely implied, as we see her dive under the sheets and see his reaction as he talks on the phone. After he hangs up, they proceed by beginning to disrobe, and we yet again witness sexual movements and brief rear male nudity.

There is also a quick scene where sex is implied as we see a clothed, married couple entangle in a garden. At a wild house party, a man stumbles upon couples rendezvousing in rooms on two separate occasions. One instance involves breast nudity as the man kicks the couple out. Wild noises are heard coming from an upstairs room, and a character says they “better make sure no one is f***ing in our daughter’s room.” A couple of brief references to sex are made, a lesbian couple is seen kissing each other, and many other couples passionately kiss, as well. We also see brief partial breast nudity as a woman changes clothes, and we later see her “testing” a man by slowly unbuttoning her shirt. Only her bra is revealed, and the man does not give in. Women are seen in fairly modest nightgowns, and a wife mentions to her husband that their sex “… felt different the other night.”

The language, albeit scattered, is heavy at times, as we hear about 17 f-words (once used sexually), one or two s-words, and around half a dozen combined uses of h*ll and d**n (more of the former). God’s name is abused about four times (twice paired with d**n) and Christ’s name is abused once. The British profanity “bloody” pops up once or twice, and one character tells another to “go to hell.” The derogatory term “Kraut,” used for Germans (particularly Nazi soldiers) is said a small handful of times.

This war film refrains from showing any violence on the battlefield, but still displays plenty outside of battle, as we witness numbers of characters getting shot from head to toe with pistols and other heavy weaponry. Most of the time, we see blood spray from their bodies and get a little too close to seeing some characters get shot in the head. One elderly woman, is graphically shot point blank and ***SPOILER*** another commits suicide by shooting herself below the jaw. The camera quickly cuts away as blood spurts. ***END SPOILER*** A grenade is tossed at a passing tank, and we see many bodies go flying after the explosion. We witness some bloody wounds after a few gunfights and explosions. Many more explosions take place, including air raids. A woman about to give birth is rushed outside of a hospital during one air raid. She gives birth outside, during the raid, and everyone survives. The scene isn’t graphic, and there isn’t any nudity. During one air raid, a plane is shot down and crash lands into a field just missing a house full of people.

Many more characters are held at gunpoint, we see a man stick himself with a needle, and one character almost punches his wife. He refrains, though, and punches a piano instead. A character is choked to death, and the one committing the murder lodges a piece of bread in the victim’s throat to make it appear that the man was already choking. We see a man with part of his arm missing (not graphic) and on two occasions characters vomit (once on screen and once off). We see a wounded soldier’s terribly scarred up face in a hospital.

There is a lot of smoking in this film and plenty of strong alcohol consumption. Cocaine is seen being used in one scene.

“And above all these put on love, which binds everything together in perfect harmony.” —Colossians 3:14 (ESV)

There really isn’t much to be praised in “Allied,” as the main key in this film is survival and discovering the truth. A character does mention that “everything will be in God’s hands,” and Max’s character’s alias is supposed to be a devout Catholic. That is the closest we get to any form of spirituality. One thing is for certain, Max loves his wife and will not accept any information on Marianne being a German spy until he unveils the truth himself. His character is a courageous one, and he does express deep, passionate love to Marianne and his daughter. Though Marianne is suspected of being a German spy, the couple’s love for each other does prove to be genuine, and they do appear to be willing to do anything it takes to protect their family and keep them all together. As John 15:13 says, “Greater love has no one than this, that someone lay down his life for his friends…”.

“Do not neglect to do good and to share what you have, for such sacrifices are pleasing to God.” —Hebrews 13:16

But love doesn’t really win in this thriller. Max and Marianne’s love for each other may be genuine at heart, but this film still sends some mixed messages about the true meaning of love and self sacrifice, as the story takes some of its twists and turns. “Allied” also appears to nod towards that sometimes giving up without perseverance is commendable, and that suicide is simply an easy way out in life when times seem bitter. I can recall 1 Corinthians 6:19-20:

“Or do you not know that your body is a temple of the Holy Spirit within you, whom you have from God? You are not your own, for you were bought with a price. So glorify God in your body.”

Albeit these characters weren’t Christians. Still, the great value of human life and true love is diminished by film’s end.

This verse from 1 Corinthians also ties in with the problematic element of sexual immorality in “Allied.” And, of course, just before verse 19 we read in verse 18,

“Flee from sexual immorality. Every other sin a person commits is outside the body, but the sexually immoral person sins against his own body.”

The immorality on display in “Allied” is appalling and completely unnecessary (as it usually is in most films). Add in some hefty language, strong violence, and drug and alcohol use and you get one mess of a film that any parent should want to keep their child away from. “Allied” may appear to be a well-crafted WWII thriller. But after two hours of slow, shallow, and disengaged storytelling, you’ll find your glass half full, longing for more thrills and more substance. It may look great, but the characters and the story being told lack chemistry, and do not intertwine well with one another. “Allied” isn’t as much of a soft dud as it is a forgettable, modern day tragedy.

“Let each of you look not only to his own interests, but also to the interests of others.” —Philippians 2:4

Justin Chang, Variety
…Pitt and Cotillard aren’t convincing as a couple, although she tries harder than he does. … [2½/4]

Peter Howell, Toronto Star Newspapers
…slow-footed and tepid, its plot twists dopey and soapy. I was rooting for things to get interesting, but I would have settled for a few surprises. … [2/4]

Kyle Smith, New York Post
…The plot gets almost as ridiculous as the idea of Lizzy Caplan being Pitt’s sister. …Except, that is, where Cotillard is concerned. She really is a marvel. …[2½]

David Rooney, The Hollywood Reporter
…there is no chemistry, no romantic fusion… an unconvincing and sluggish pastiche of a war movie… the final big reveal feels anti-climactic, with unanswered questions concerning Marianne… [2/5]

Peter Bradshaw, The Guardian (UK)
…a couple side characters are in an open, public lesbian relationship…