for some sexual content, graphic nudity and brief violence. 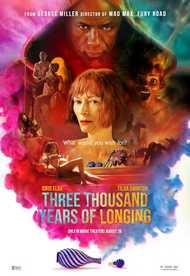 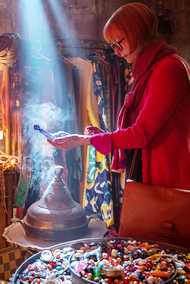 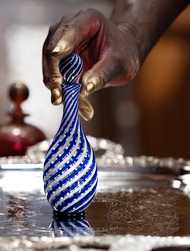 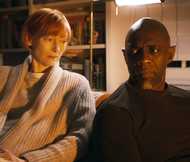 Dr. Alithea Binnie (Tilda Swinton) is fascinated by stories from all over the world and she delights in sharing them with others. Traveling to Istanbul for a Narratology or story-teller conference, she comes across a bottle, misshapen by fire and yet intriguing enough for her to buy it. Once in her room, she rubs it and, just like in the story of Aladdin, a powerful Djinn or genie emerges, and he is eager to grant her three (3) wishes.

Surprisingly, she claims to have no need nor any desire that she would wish for. On top of that, she neither trusts him nor the unforeseen consequences those wishes will surely bring her. However, for the Djinn (Idris Elba) to be freed once and for all time, Alithea must make her 3-wishes. Therefore, in order to win over her confidence, the Djinn tells her of the tragic circumstances that led him to be repeatedly entrapped over the past 3,000-years.

Thus begins our tale of the life of this Djinn, from ancient Egypt as the hopeful consort to the Queen of Sheba, to the unseen benefactor of a lowly slave girl in love with a Sultan’s son, before culminating with the young bride of an old polygamous man. Zefer, is that restless girl who finds solace from her loveless marriage in the greatest books of science, all of which the Djinn happily provides for her hungry and burgeoning mind.

“Three Thousand Years of Longing” harkens back to the fabled “1001 Arabian Nights,” but here is a very adult themed, R-rated fairy tale. Delving more than any of us ever wished to know about the life and times of a millennium spanning genie, this slowly-paced, exposition heavy film is visually opulent and graphically obscene.

LANGUAGE: Briefly heavy. The Lord’s name is taken in vain once by a pair of seemingly self-righteous older ladies, neighbors of Alithea. The f-word is also shouted in anger, and derogatory talk of ‘ethnics’ is also spoken of by one of the ladies. The rest of the crude language worth noting involves euphemisms for describing intimate acts such as ‘making love’ or ‘love-craft,’ and talk of concubines, including pleasures of the flesh and fetishes that even the Djinn decries as debauchery.

SEX/NUDITY: Extreme and pervasive. King Solomon, a true historical figure is turned into a caricature and portrayed as merely a magician. After winning the heart of the Queen of Sheba through his magic, they are shown having sex. A large bed chamber is filled with naked and obese women who are used as sex slaves.

Scantily dressed concubines lounge about an indoor pool while the ones in the water are naked. Side and full-frontal female nudity is shown throughout the movie. Less graphic but implied sex occurs twice between an old man and his pre-teenage (12-year old) and later teenage bride.

“Put to death, therefore, whatever belongs to your earthly nature: sexual immorality, impurity, lust, evil desires and greed, which is idolatry.” —Colossians 3:5

“But I say, walk by the Spirit, and you will not gratify the desires of the flesh.” —Galatians 5:16

VIOLENCE: Moderate. People are shot with arrows, cut down by swords/knives, decapitated and garroted or strangled to death with a wire. Someone is thrown from a great height to their death, people wielding demonic powers are shown manifesting spiders and insects and others are killed both in war and randomly for almost no reason at all. Fields of dead people are shown on the battlefield and the corpse of an old man is shown at length. A body is seen decomposing and partially turning to dust.

Films often portray evil as good, yet even within their disdain they touch on themes that when held up against the light of truth found in God’s Holy Scripture can be worth examining. Some of the lessons from this film to be explored include ones on myths, truth, and desire.

MYTHS. Alithea adds that, “…sooner or later our ‘creation’ stories are replaced by the narratives of science.” It is clear with this that the Director is coming from an anti-Judeo-Christian/secular humanist viewpoint. One example of this is when he repeatedly denies the historical truth of the Bible on the God-chosen King of Israel, Solomon. To emphasize the Director’s worldview, the Djinn, in speaking about humanity says, “You creatures of dust have managed to eclipse the power and purpose of Djinn and angel.”

But don’t most fantasy films promote the same thing? Movies featuring aliens, ghosts, genies (Djinn) and even super-heroes are all showcasing fantastical aberrations from the ‘norm’ instead of pointing us up towards the God in Heaven that created all below. The Word of God warned us of this very time as we approach the end of history:

“…the time will come when people will not put up with sound doctrine. Instead, to suit their own desires, they will gather around them a great number of teachers to say what their itching ears want to hear. They will turn their ears away from the truth and turn aside to myths.” —2 Timothy 4:3-4

The idea of science and nature itself surpassing the need for God was likewise foretold:

“They traded the truth about God for a lie. So they worshiped and served the things God created instead of the Creator himself, who is worthy of eternal praise! Amen.” —Romans 1:25

TRUTH. Debating with Djinn, Alithea describes love as a vapor and wonders out loud if it is truth [itself] or madness. The movie does not come close to exploring what truth is, perhaps because that has become one of the most misused and misappropriated words today. How else can you explain a culture where people bandy about the phrase, “my truth” that really only reflects their opinion, not truth and certainly not reality.

Truth does not waver and those that cannot accept truth must hope and pray that God brings the truth to them, but it will not be easy.

“We are from God, and whoever knows God listens to us; but whoever is not from God does not listen to us. This is how we recognize the Spirit of truth and the spirit of falsehood.” —1 John 4:6

“God is spirit, and his worshipers must worship in the Spirit and in truth.” —John 4:24

“Jesus answered, “I am the way and the truth and thelife. No one comes to the Father except through me.” —John 14:6

DESIRE. The wishes that the Djinn must grant cannot be small inconsequential things as Alithea discovers when she tries to casually fulfill her side of the bargain. No, they must deal with your heart’s ‘true desire.’ This theme is first presented when the Queen of Sheba’s heart is won over by the desire of her heart.

Later, Alithea admits to her heart’s desire, but how reliable is that when pursuing happiness? We are well advised by the Word of God against following our heart as the Prophet Jeremiah scribed:

“The heart is deceitful above all things, and desperately wicked: who can know it?” —Jeremiah 17:9

In fact, can anyone but the one true God and his only begotten Son Jesus Christ know what we truly desire, and what can make us eternally content? There is a way and He is it!

“Delight yourself in the LORD… and he will give you the desires of your heart. Commit your way to the LORD; trust in him… and he will act.” —Psalm 37:4-5/p>

Tilda Swinton and Idris Elba are both highly talented actors and the deceptive ease of their performances lives up to expectations. However, the ponderous, overly measured pace throughout can make you forget you are watching a film and not reading from a book.

Likewise, the cinematography, which is at times brilliant, cannot lift the film out of the muck and mire that the Director regrettably chose to wallow in. Audiences may well be tormented by both a middle act that is nigh pointless, besides being 20-minutes too long, as well as a final act that seemingly never ends. The music, Djinn’s theme, is as sparse as it is unremarkable.

“Three Thousand Years of Longing” is a dark blasphemous film punctuated with demonic themes I do not recommend. This goes for the average discerning film-goer as well as Christians, who should not want their conscience’s seared by this perverse effort. You would do well to head the Apostle Paul’s advice:

“Do not be conformed to this world, but be transformed by the renewal of your mind, that by testing you may discern what is the will of God, what is good and acceptable and perfect.” —Romans 12:2

Secular Movie Critics
All talk and no magic …What should be a cinematic journey into amazement and otherworldly adventure instead becomes a tedious, word-heavy slog… [1½/5]
Ann Hornaday, The Washington Post
Hours and Hours of Pondering… long and feels incomplete, weighty without much psychological or intellectual heft, colorful but rarely dazzling and never whimsical enough. …The leads don’t really make their characters move “considering” the other into anything we can warm up to. …[1½/4]
Roger Moore, Movie Nation
…While there’s a liberal sprinkling of humor, the mysteries it conjures are windy and academic, though not the kind of academic that stands up to scrutiny. …strains so hard for beguilement and timelessness that it’s ponderous and heavy…
David Rooney, The Hollywood Reporter
…bonkers drama… this film lacks magic… Swinton and Elba…simply lack the chemistry to make their tryst convince as romance. And the fantasy flashbacks too often sink into chintz. …[2/5]
Robbie Collin, The Telegraph [UK]
…fails to spark… soon disappears from your mind in a puff of smoke. …[2/5]
Phil de Semlyen, Time Out
…feels like a rough draft that should have stayed in a dusty bin somewhere in the middle of a tourist shop. …Miller’s own storytelling is as sloppy as the djinn’s, and the longing he so wishes for us to partake in feels forced, unearned, and alienating. … [2/5]
Jenny Nulf, Austin Chronicle
…the movie’s colorful parts just whir and stop, a pinwheel in unsteady wind. …
Manohla Dargis, The New York Times
…a scattershot assemblage of motifs, philosophies, and themes in search of a spine to hold them together. …
Leigh Monson, The A.V. Club
…frustrates more than it enchants.…
Tim Grierson, Screen Daily
…the film doesn’t offer any concrete answers, leaving us adrift in a sea of provocative queries. For a film about narrative, it meanders, and loses focus. …
Katie Walsh, Tribune News Service