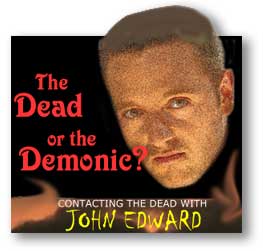 Crossing Over’s John Edward—Are and others really communicating with the dead, as they claim?

Can people really communicate with the dead?

Spirit contact is growing today. People who have lost loved ones want to know that their deceased relatives are okay. People may seek advice from the departed loved one, but in most cases are subconsciously wanting to know what's in store for them one day.

John Edward is a psychic who is making headlines on television. He has been on the “Oprah Winfrey” show, “Larry King Live” and a host of other well know TV programs. Unlike the spiritualists of yore, who typically plied their trade in dark-room séances, Edward and his ilk often perform before live audiences and on television. Indeed, Edward (a pseudonym: he was born John MaGee, Jr.) has his own popular show on the SciFi channel and CBS2 called “Crossing Over,” which has gone into national syndication. Yes, he does claim to speak to the dead, and for that he charges $750 for a 30 minute private session and upwards to $100 for his convention style group sessions. My guess is that this multi-millionaire also speaks more frequently to his investment banker!

It is contacting a disembodied being, whether it is believed to be a dead person, a being in another dimension, a spirit guide, a spiritual being, an advanced soul, a demon, a higher evolved Master, or any spirit. Spirit contact has been and is common in many cultures that contact dead ancestors and contact the spirit world for advice or for information on the future. In the United States, the religion of Spiritualism, which still exists, teaches that one can and should contact departed souls for advice.

Those of you who have read my book (Out from Darkness) know that I was once a spiritualist medium. I can attest with all certainty that there is something on the “other side.” I thank God that I was able to realize that this “something” was demons who were impersonating the departed.

If you don't get anything else from this piece, please pay attention here: YES, the “other side” can be contacted—I have personally done so. But the contact is not with your former loved ones, but demons of the Prince of Darkness.

The Messages from the Spirits

John Edward's show, “Crossing Over,” was so popular on the Sci-Fi channel, that it “crossed over” from cable to regular network. Edward approaches a section of the audience and starts giving his “impressions” of what he is getting, whether it be a name, numbers, or a date, until someone responds with information that matches. He also asks the person questions as he tosses out “clues” he says he is receiving. Sometimes it seems that he is throwing out very general information and that the person in the audience is filling in the blanks for Edward. Other times, Edward seems to be uncannily accurate.

Interestingly, it seems the “dead” have a hard time being very clear. For example, they may show Edward pink roses to say that everything is alright, according to Edward, or they may show Edward a flag to indicate their past patriotism in this life. It is sort of like a game of spiritual charades. One wonders about this. Why can't the dead just speak words to Edward, or write them out on a “spirit chalkboard” so to speak?

James Van Praagh (another popular medium in the U.S.), in explaining the difficulty he has in interpreting the symbols shown to him by spirits, said that the recently deceased spirits were just learning to communicate, and so one could not expect all messages to be clear.

This raises other questions: Why do recently dead people have trouble communicating? Where do they get these objects that they show Edward and Van Praagh? Why can't they just project their thoughts into Edward's mind? Why are their messages so prosaic and, well, boring? The picture one gets of these creatures certainly does not present a very interesting company of people to pass the time with. Why would these spirits have any special wisdom just because they are dead?

Though the spirits always claim to be happy and to be doing well (is Hitler, also, there with them, doing okay?), we do not know why they are happy and doing well. What do they do, exactly? And if they told us, how do we know it's true? How can we test these spirits to see if they are lying about anything or everything they tell the mediums?

The answer is that we can't test them based on our own experiences, since we haven't been to the other side. Only God really knows who these spirits are, and He has told us through the scriptures that they are really demons.

Note that the messages from the “dead,” from the spirits, and from channeled entities never encourage people to believe the Bible, never urge people to trust Christ for salvation, and often openly contradict God's word or even speak derisively of Christ as Savior.

The reason that John Edward is so dangerous is that he is luring thousands of people into spiritualism—that's thousands of people who are talking with demons, but believed to be the “dearly departed.” He is simply preying on the emotions of grieving people for the money—and lots of it.

After Edwards is through with them they are left believing in spiritualism and many are seeking out local spiritualists to continue “crossing over.”

What does God say about it?

The Occult—What does the Bible say about it?

What is the Occult?

Who is the being of light encountered in near-death experiences?

How to find HOPE

Halloween—What's it really all about?

The spirits responding to contact are not dead people or wise spiritual beings, but evil demons. The messages from these spirits may mention God, but they never urge Bible study, worship of God, or the need for Christ as Savior. The spirits deny Christ as the Savior or distort His message. God had some pretty harsh words for false prophets who were telling their dreams as though they came from God. This is not too different from claiming to receive messages from the dead and saying that God approves of this, or that it is a good thing, when God has clearly forbidden such contact. This is what God had to say about the prophets who presented their dreams as coming from God, when they weren't:

“I have heard what the prophets say who prophesy lies in my name. They say, ‘I had a dream! I had a dream!’ How long will this continue in the hearts of these lying prophets, who prophesy the delusions of their own minds? They think the dreams they tell one another will make my people forget my name, just as their fathers forgot my name through Baal worship. Let the prophet who has a dream tell his dream, but let the one who has my word speak it faithfully. For what has straw to do with grain?” declares the Lord. “Is not my word like fire,” declares the Lord, ‘and like a hammer which shatters a rock?’” Jeremiah 23:25-29

Ben Alexander was deeply involved with the spiritualist movement in his native England. After moving to the United States in 1964 to start a spiritualist organization, Ben was led to the Gospel of Christ! With his unique life experience, Ben felt impressed to begin a Christian ministry that informs the church and ministers to those caught up in occult practices. (Visit www.espministries.com for more information.)

We cannot get reliable information from God through spirit contact. We don't need guidance from wispy spirits playing charades. We don't need a medium, channeler, or psychic contacting spirits who are playing with our minds and preying on our grief. Instead, God gave us His only son, and He gave us His word in scripture.

Through trusting in the work of Christ on the cross as the atonement for our sins, we are reconciled to God. Jesus, who has power over all the spiritual realms, has this to say:

“I am the First and the Last. I am the Living One; I was dead, and behold I am alive for ever and ever! And I hold the keys of death and Hades,” Revelation 1:17b-18

Friend you have a choice: believe God's Word or believe a lie—John Edward's word. Regretfully, John Edward trades on grief.