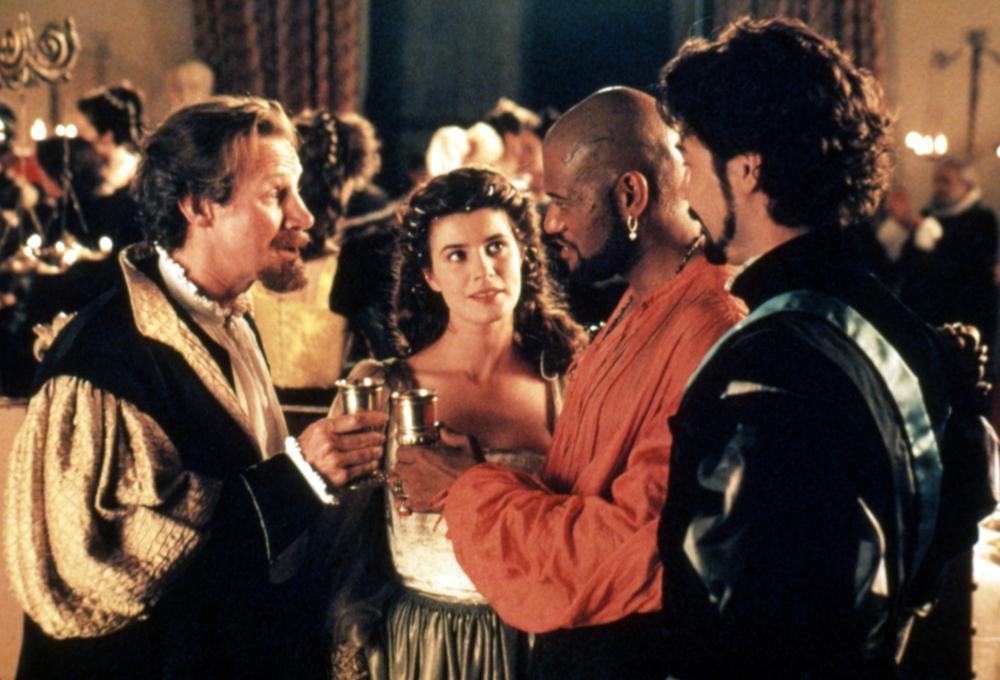 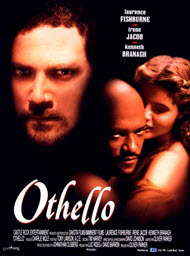 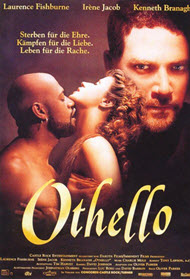 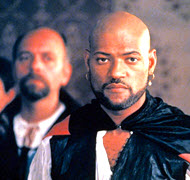 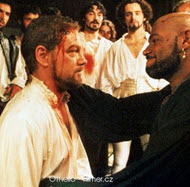 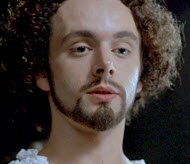 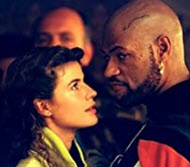 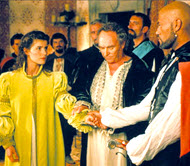 Bride and groom / wife and husband

For those not familiar with the tale, “Othello” is the story of a Moor (Laurence Fishburne)—that is, a man of black or dark-skinned—who is chosen to command the Venetian garrison on the island of Cyprus. He has recently handpicked his officers and, in doing so, has rejected a Venetian soldier named Iago (Kenneth Branagh), earning the latter’s undying hatred. To further complicate matters Othello has eloped with Desdemona (Iréne Jacob), the daughter of a Venetian senator, initially earning the curse of her father and her other suitors. Iago contrives to use these circumstances to destroy Othello.

Cinematically Oliver Parker’s “Othello” is quite good. Jacob does a great job creating a Desdemona of perfect wifely virtue and fidelity, which is integral part of the tragedy. Fishburne and Branagh also give excellent performances. Moreover, the character of Iago is particularly instructive for Christians; he is an archetype of Satan. Seeing how this villain manipulates the other characters could help the observant Christian avoid some of Satan’s deceptions in real life.

On the negative side, “Othello” contains much gratuitous sex (four scenes, two containing nudity, one of which shows the lead actress at a distance, fully disrobed from the front). The medium of film allows the director greater freedom with what the playwright left unsaid. Additionally, there is a fair amount of sexual innuendo in most Shakespeare plays-the Bard’s doing, not Oliver’s. “Othello” is no exception. Fortunately, most of it is often obscured in the Elizabethan language of the production.

Owing to the negative elements, I cannot recommend Parker’s “Othello.” Nothing would please me more than to be able to endorse the study of Shakespeare to the public, especially young people. However, while the acting is first rate, the sex and lack of adherence to the text make it very inappropriate as an educational tool. If you are looking for Shakespeare, skip this one.

That being said, as an alternative, let me encourage you to seek out another presentation of the play, one that abides more closely to the text and does not seek to put a bizarre spin on the plot, as some directors are wont to do.

Positive
Positive—This is a truly excellent portrayal of William Shakespeare’s tragedy. The acting is unbelievably good, and it really brings the story to life. The sets and the cinematography is dazzling. It has a very beautiful film score. I have not seen many films this good in my life. My only complaint from a literary perspective is that they abridge the text quite a bit, though I understand why they would have done this if the film studio insisted it remain within a certain time limit.

I was also happy they didn’t feel the need to put it into a modern setting, but could actually set it in Venice in its actual time period. This film is as good as films get from a literary and cinematic perspective.

The story depicts evil, but it is does not endorse it, much like the evil depicted in the Bible itself. Shakespeare (a very strong and devout Christian himself) was very familiar with the Bible and references it often.

Iago is a diabolically evil character, and many consider him to be a sort of manifestation of the devil. In the beginning, he says “I am not what I am,” which is meant to be a deliberate inversion of what God says of Himself, “I am what I am.” He is meant to be the antithesis of God and, unlike God who creates what is good and whole, Iago seeks chaos and evil as his chief and sole delight.

Iago, like the devil himself, deceives characters into committing evil acts. He orchestrates a great deal of bloodshed, betrayal, and jealousy by planting evil thoughts into people’s heads and making them turn against each other. However, as Holy Scripture itself tells us, “For nothing is secret, that shall not be made manifest; neither any thing hid, that shall not be known and come abroad.” At the end, all of the evil Iago has committed is revealed, and all sin and evil exposed and punished.

If only we had story-tellers and writers like William Shakespeare today. The story is both one of immense quality and is excellent from a Biblical and moral standpoint.

Regarding moral content, as far as the story itself is concerned, it is completely wholesome and moral. That’s how you know it wasn’t written today. It is both entirely clean and nothing would be offensive to a Christian audience. Because it uses the words of Shakespeare verbatim, it obviously has no bad language whatsoever.

As to the other content that is not written by Shakespeare but was included as a product of the director’s interpretation. There is a bit of violence, but this is also in keeping with the play, though the scenes where Roderigo is killed and the violence at the end is somewhat violent. But the violence does not exceed PG-content, and it is not unsuitable for family viewing.

The only reason the film is rated R is for a few brief scenes of sexuality with partial nudity. This is very disappointing, since it is an otherwise entirely wholesome, family film and excellent for use in the classroom. These are not overly graphic, but they still make the film unsuitable for young kids.

Nevertheless, I do believe the R-rating was overkill. A PG-13 rating would have sufficed, simply because of the very brief albeit completely unnecessary sex scenes.

If these scenes can be cut through, the film is otherwise perfect for family viewing, and it is a very underrated masterpiece of cinema. The story itself continues to be enjoyed 400 years later, and I imagine it will continue to be do so.
My Ratings: Moral rating: Good / Moviemaking quality: 5
Nathan, age 25 (USA)