for some thematic material. 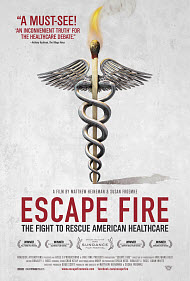 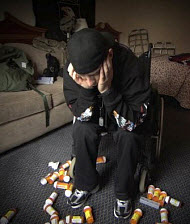 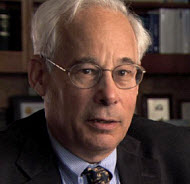 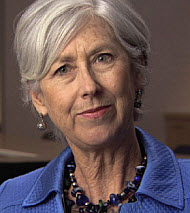 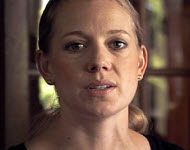 “Escape Fire” is a documentary about the current state of America’s healthcare system. It begins with a definitive illustration of the meaning of the term “Escape Fire”. The example shown is a wildfire which breaks out on a country hillside. By the bravery of a few, an escape fire is utilized. This means, as the wildfire approaches, the land or field that has not yet been burned, is intentionally set on fire by those trying to escape. The intention is when the wildfire reaches the area where the escape fire began, there is nothing left to burn, thus stopping the wildfire. This is considered to be a dramatic approach when there is no other escape method. Nevertheless, the documentary suggests that the current state of health care demands an extreme and dramatic approach to fix the system.

The movie does a thorough job of laying out the case of what they consider a “failing health care system” in the United States. The underlying theme of the movie is that today’s healthcare system focuses on producing revenue opposed to getting patients better. As the movie progresses, a physician sets off to work at a nearby clinic. During her interview, she expresses her frustration about the job. She states that she initially went into this line of work to help people, however, with reimbursements based on the number of patients you see an hour, it becomes a numbers game. The movie’s focus seems to seek societal awareness about a mindset that they believe has completely taken hold of the healthcare system, which is pharmaceutical medication is the only way to treat a condition. The documentary outlines the healthcare system’s focus on doctors and pharmaceutical companies receiving economic incentives for chronic disease maintenance, instead of nutrition. There are many points that are highlighted to support the movie’s framework, such as the following: United States soldiers’ prescription drug use has tripled in the past 5 years, United States life expectancy is around #50 around the world, and United States and New Zealand are the only two places who permit the advertisement of prescription drugs.

Possible objectionable content—There are several images of patients in the hospital; a patient is shown falling off a stretcher. There is talk of war and causalities of war. There are patients shown who are doped up on prescription drugs. The scenes are not graphically shown, or over the top, however it is beneficial for parents to know and expect this beforehand. There is no obvious use of profanity or foul language, or sexual content.

The movie makes some interesting and valid points about the approach of many patients, and the healthcare system. Scripture states in 2 Chronicles 16:12: “And Asa in the thirty and ninth year of his reign was diseased in his feet, until his disease was exceeding great: yet in his disease he sought not to the LORD, but to the physicians.” From a spiritual point of view, this Scripture reminds us that God should be a part of our decisions regarding our health. Proverbs 3:6 “In all thy ways acknowledge him, and he shall direct thy paths.”

The movie omits the miraculous things that God has provided through modern medicine. It is understood that the mission of the movie is to discuss the problematic aspects of the industry. However, showing the pros and the cons provides a more balanced approach. In addition, it would have been refreshing to see the movie highlight the balance individuals should have when approaching their own health. Such as, going to your Physician while using God’s wisdom and the leading of the Holy Spirit, about the instructions you receive. Proverbs 4:11-12 says,

“I guide you in the way of wisdom and lead you along straight paths. When you walk your steps will not be hampered; when you run, you will not stumble.”

Overall, I recommend this relatively clean movie, for its thought-provoking aspects.