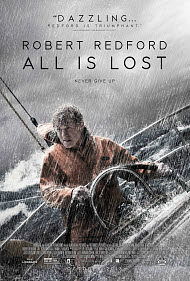 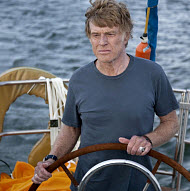 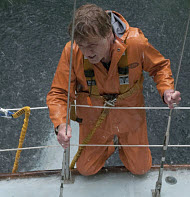 ships in the Bible

In story form speak, “All is Lost” is that moment when the hero’s usually already battered hope is utterly abandoned—often by the character himself. It’s time to go home. It’s a period of lamentation whose prescription is not merely renewed hope but something new, and that something new never comes, not within the all is lost moment.

As a result, a story can hardly reside purely in this moment. It needs progression and regression. As the name of this story indicates, it is about as close to camping within the all-is-lost moment that a story can get.

Within the body of the film, in the midst of eons of silence, in a sheer moment of frustration, our protagonist lets go of a somewhat muttered but loud F-bomb. That’s all of the cursing I recall, though one source says the F-word was used 3 times. Perhaps this is during the radio scene. [Editor’s Note: According to various, generally reliable sources, there is just one use.] There is nothing else that could be called morally objectionable, save that it may serve to provide a fear of ocean going for little ones. This is after-all a story about hope beat to a pulp.

I enjoyed this film very much and encourage anyone to see it for several reasons. The number of words spoken in this film could be counted on just a few hands—this is quite a feat. The drama remains engaging, and the audience has a little bit of work to do to understand what the character is up to at times. Mr. Redford’s performance is engaging. It is a good story told with imagery and sound, no dialog for spice, no dialog for a crutch. I find the silence coupled with what the story accomplishes to be a powerful message, and some of this film’s impact stops right there.

There is a message in the little piece of dialog at the beginning of this film that shouts of a deeper meaning than simply that of a sailor struggling on the surface, but then what sailor’s struggle is simple? In a sense, this little piece of dialog is good for all of the silence. It sets the stage. It goes like this: “I’m sorry. I know that means little at this point, but I am. I tried. I think you would all agree that I tried. To be true, to be strong, to be kind, to love, to be right, but I wasn’t.” He declares, “All is lost.”

My first impression was “that’s a mouthful for a man leaving the world behind to drown in an endless sea.” It has an edge of bitterness, as if to swallow an important pill. We could perhaps imagine a back story—this man is disappointed in himself, to say the least.

Is his sense of darkness not the realization every man should come to?

This short dialog whispers powerful shivers of self-condemnation. This is not to be mistaken with repentance which involves changing direction, or repentance toward God which involves changing direction toward God’s will. The rest of our character’s story is that of a floundering mortal on a sea of turmoil—literal, relentless, faceless, daunting and almost merciless. I would reiterate: Coming to the realization of one’s depravity is an important step toward repentance, but it is not repentance itself.

James 1:19-27 “Wherefore, my beloved brethren, let every man be swift to hear, slow to speak, slow to wrath: For the wrath of man worketh not the righteousness of God. Wherefore lay apart all filthiness and superfluity of naughtiness, and receive with meekness the engrafted word, which is able to save your souls. But be ye doers of the word, and not hearers only, deceiving your own selves. For if any be a hearer of the word, and not a doer, he is like unto a man beholding his natural face in a glass: For he beholdeth himself, and goeth his way, and straightway forgetteth what manner of man he was.

But whoso looketh into the perfect law of liberty, and continueth therein, he being not a forgetful hearer, but a doer of the work, this man shall be blessed in his deed. If any man among you seem to be religious, and bridleth not his tongue, but deceiveth his own heart, this man’s religion is vain. Pure religion and undefiled before God and the Father is this, To visit the fatherless and widows in their affliction, and to keep himself unspotted from the world.”

Many times, the worldview we pull from a story is our own. This story is certainly no exception. Left only to the human device of self-actualized depravity, we are still only lost. We look for the perfect law of liberty.

On the other hand, people in boats by themselves cannot fulfill the last part of this Scripture, and people focused on their own problems don’t have much time for widows. What happens in life beyond the boat is up to us.

“These things I have spoken unto you, that in me ye might have peace. In the world ye shall have tribulation: but be of good cheer; I have overcome the world.” —John 16:33

Neutral
Neutral—Robert Redford did an excellent job acting as a man who got lost at sea and faced insurmountable odds (we kept asking ourselves “is he really 77 years old?!”). His character’s where-with-all to adapt and overcome adversity—after adversity—is amazing. The cinematography was very well done and made you feel you were right there with him.

It was rated PG-13 for language that I must have missed. I did not find anything offensive about this movie and watched it with my family. Nothing that I think Christians would find offensive. Very few speaking parts and you come away asking yourself “what would I have done in that situation”. We got to the ending, and all of us were saying “Are you kidding me?!” (In a positive light)
My Ratings: Moral rating: Good / Moviemaking quality: 5

Kevin, age 47 (USA)
Comments from young people
Positive—Robert Redford is a revelation! This is a must-see for any true film fan.
My Ratings: Moral rating: Average / Moviemaking quality: 4

C, age 15 (USA)
Movie Critics
…captivating… Director J.C. Chandor's commitment to showing, not telling, is remarkable and Robert Redford’s performance is breathtaking. … Redford gives the performance of his career. It feels as if the accumulated wisdom of his years, and knowledge amassed in his many screen roles and filmmaking efforts, is contained in this one performance. …

Justin Chang, Variety
…acting without a net… This is Robert Redford doing what too many stars should do and don't: taking a chance. And reinventing his art. It's an extraordinary thing to see. [A]

Owen Gleiberman, Entertainment Weekly
…the acting is note-perfect, a career performance from a man who has been in the business for more than 50 years. … [4]

Betsy Sharkey, Los Angeles Times
…There is incredible tension in this ordeal, this effort to survive, to find rescue, and Redford—an icon of the American film experience for more than half a century now—makes that tension deeply palpable. Those blue eyes have never looked less cocky, less certain, more overwhelmed by the magnitude of his predicament. … [4/4]

Steven Rea, Philadelphia Inquirer
…an intense movie, even without offering quantities of content (one f-word, a minimum of violence, no sex). But all is certainly not lost in this deep tale of a man and the sea. As harrowing as the film is, it's equally encouraging, filled with creativity and courageous action. …

Paul Asay, Plugged In
…a fascinating voyage across a vast ocean, and into the great uncharted waters of our selves. …