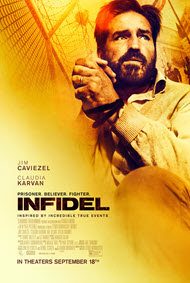 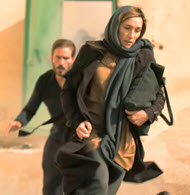 Kidnapping and torturing of people in the name of Islam 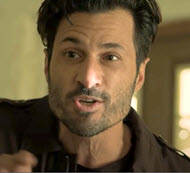 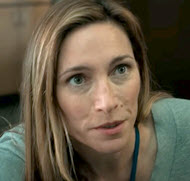 A wife risking everything to save her husband

Being brutally beaten and tortured for one’s faith

Being abandoned by one’s country

Why some people lose their faith

ABOUT ISLAM—An Overview for Christians

As a director, Cyrus Nowrasteh is nimble and concise, adroit at constructing images and timing sequences in ways that make for maximum impact at key moments. Much like his courageous, forthright, and often doomed characters, he soldiers forth, forging a story with more metal than lace, and a theme as precise as an archer’s arrow. In his last film, “The Stoning of Soraya M.,” there were no gray areas, no peripheral rings. In Nowrasteh’s world, there are only bull’s eyes, and with his new film, “Infidel,” he continues to hold fast to that notion.

I like nuance when I watch movies about moral dilemmas. Nonetheless, I admire Nowrarteh’s unswerving directness. He holds up his Christian faith the way a warrior holds up a weapon and a shield. His visual style, if not his too often one-note and stilted writing, ignites a fire that stirs the spirit as much as it ignites the senses.

The warrior imagery may seem over the top, but St. Paul tells us that being soldiers is our protection “against the flaming fires of the evil one.” In his sixth letter to the Ephesians, Paul encourages us to wear “the helmet of salvation” and to carry “the sword of the spirit.”

Those are not the words of a negotiator, an appeaser, a diplomat. They are not nuanced phrases, and would never find their way into a State Department memo.

Paul leaves no doubt as to who his enemy is and what that enemy wants. The writer of those epistles knows what we are up against. He also knows that, in spite of where the political or cultural winds may blow, the real battle lines have not moved since they were drawn by the powers of darkness at the start of heaven’s rebellion long ago. That battle continues, and it is not a fight in which one can play both sides. We have to make a choice.

There is no doubt what side Nowrasteh comes down on. He does not so much seek the truth as proclaim it. Truth is always at risk, perhaps never more so than in our times, and since truth is revealed to the world in the person of Jesus Christ, Christianity is also at risk. I would ordinarily follow such a statement with another one saying that to prove this, all we need do is read newspapers or watch television news, but the oppression that Christians suffer throughout the world today is ignored, sometimes even denied, by those agencies. In keeping their silence, they have made their choice.

Nowrarteh is not demure about portraying the persecution of Christians in the Middle East, especially in Iran. The former president of Iran demanded an apology for “The Stoning of Soraya M.,” calling it sensationalistic and inaccurate, despite reports, and even some YouTube videos, of actual stonings in that country. The director has not backed down; indeed, he has upped his challenge to the Iranian regime with his latest effort.

Doug Rawlins (played by James Caviezel (“The Passion of the Christ,” “Person of Interest,” “Deja Vu”) is an outspoken American journalist and blogger who travels to Cairo to make a speech about Christianity. While saying things that one would expect a Christian apologist to say: “Jesus is God; He is the way, the truth the and the light, and He wants to be YOUR God,” he causes rumblings amongst Islamic groups, and the countries that back them. To those groups such words are more than controversial. They are acts of war.

Members of a Muslim terrorist group, a rag tag bunch despite their Prada garb and Sassoon hairdos, abduct Rawlins, taking him first to Lebanon, and then to Iran where he is held prisoner and sentenced to death for spying. The spy charge is, of course, phony and nonsensical: spies do not write blogs or go on speaking tours. His enemies know that he poses a greater threat. Rawlins does not just believe in a truth; he speaks it out loud. Instead of bowing to the Muslim world with hosannas to their “religion of peace” and their “light of learning that paved the way for the Renaissance and the Enlightenment,” he says clearly and unreservedly what he believes.

Rawlins is not just a danger to the people who capture and abuse him, but also to the people who should be standing by him. The U.S. Government is called upon to assist Rawlins. It refuses, bothered by the fact that one of its citizens has inconvenienced them by “causing an international incident.” It wants the problem, and especially that outspoken citizen, to go away. It is left to Rawlins’ wife, Liz (Claudia Karvan), who works for the U.S. State Department, to risk her own life by going to Iran and working behind the scenes in an attempt to free her husband.

The film moves at a kinetic pace: passions simmer, dangers mount, and violence often erupts. “Infidel” sticks to the conventions of the action thriller, and it does deliver its share of hair-raising scenes, but it is in the quieter moments, those of reflection, prayer and grace under pressure, best portrayed by the commitment of a devoted Christian underground in Iran led primarily by women, that keep the narrative grounded and relevant.

Caveziel gives a characteristically impassioned and noble performance as the outspoken reporter Doug Rawlins. He reveals, in a mostly understated way, a strong resolve in the face of a danger that knows how to instill fear and despair. He completes the arc of a man who goes from intellectual awareness of terrorism to staring it in the face. When the masks come off, it is not just the enemy that is revealed. Caviezel reminds us what we can become, and who we really are, when we find ourselves isolated and forsaken.

Claudia Karvan (Caviezel’s co-star in the underrated and mostly unseen 2008 Australian film “Long Weekend”) brings intensity and compassion to the part of Liz Rawlins, but she also adds an every-day, every-woman quality that is often lacking in films depicting women on their own in the Middle East, usually starring miscast Hollywood regulars, notably Angelina Jolie in “A Mighty Heart,” and especially Sally Field in “Not Without My Daughter.”

As Ramzi, the lead kidnapper, head prison guard and interrogator (a multitasker par excellence), Hal Ozsan is a revelation, giving a harrowing performance as a cipher who can be either true believer or non believer depending on what the dilemma of the day calls for: “the only way out of here is to tell them what they want to hear.” The Colin Farrell-style insouciance, and accent, the Alan Richter-like smoldering menace, and the most perfect jaw-line since Dr. No’s all blend to make for a droll and engaging villain, just the right counterpoint to Caviezel’s restrained emotion.

“Infidel” scores as a suspense yarn and as a film of faith, certainly not an easy task in today’s cinematic world and social climate. It deserves our attention and our praise. It alludes to things whose time may come and go: movie moments, flare-ups in the streets of the Middle East (not unlike those in our own cities today), and even a virus (who knew that Iranian prisons practice social distancing too, at least during visiting hours?), but more importantly, it speaks to something that will always represent who we are as Christians, fighting the good fight as best we can.

“Heaven and earth will pass away, but my words will not pass away.” —Matthew 24:34