for some thematic elements and mild peril. 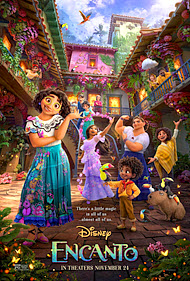 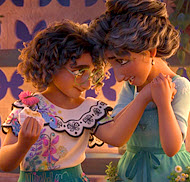 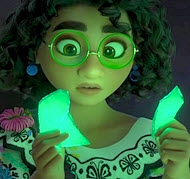 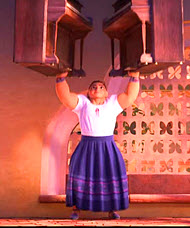 Importance of family relationships and friendships 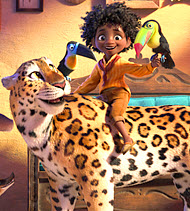 Living in the mountains of Columbia 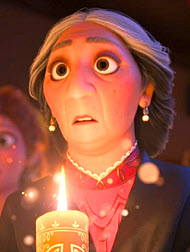 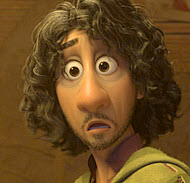 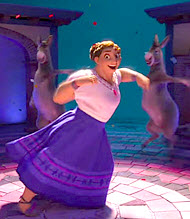 Somewhere in the mountains of Colombia, a group of families are looking for a new home. After losing her husband to marauders, Alma Madrigal says a prayer for safety to a candle. Unknown to her, the candle all of a sudden comes to life with a miracle. From that candle, a house appears, along with a thriving village for the rest of the group.

As the years passed, each Madrigal family member is given a magical gift from the candle. That is, all except Mirabel (voice of Stephanie Beatriz). Why not her? That’s a mystery. And, things continue to get more mysterious when Mirabel notices her family’s casita starting to crack and break. In addition, several family members are losing their gifts. It’s up to Mirabel to solve this mystery and help protect her family.

“Encanto” is a high-quality film. The animation is lush and breathtaking. Full of picturesque choices and authentic backgrounds, Disney Animation continues to push the envelope when it comes to creative choices. There’s also more detail in the costumes, as well as some fantastic choreography to the musical numbers.

Speaking of being a musical, Lin-Manuel Miranda has delivered another superb soundtrack here. The stand-outs are Mirabel’s “I Want” song, “Waiting on a Miracle,” and the terrific ensemble piece, “We Don’t Talk About Bruno.” Older sister Luisa’s number, “Surface Pressure,” is a catchy number as well. Two of the songs, “Dos Oruguitas” and “Colombia, Mi Encanto,” are in Spanish and add to the film’s authenticity. The only song that didn’t seem to click for me was “What Else Can I Do?”, which isn’t a great match for the film tonally. Even so, it serves as strong character development for the middle child.

It is also nice to see the film stick to Central American-based talent in the voice cast. Beatriz and John Leguizamo are the exceptions, but they are terrific in their lead roles. Jessica Darrow nails the toughness of Luisa, while Carolina Gaitan nails the changing moods of her character, and Ravi Cabot-Conyers is adorable as Antonio.

Meanwhile, the story does a wonderful job balancing its characters, giving them each a distinct personality, while keeping the focus on Mirabel. There are a few twists in the script that work really well, and the ending succeeds in being emotionally-compelling.

On the downside, some of the dialog does zip by at such a quick rate that it may inhibit overall understanding (I had a similar issue with “In the Heights”). This is true in a couple of the songs as well.

“Encanto” stresses the importance of familial love, and the importance of honesty and transparency. Mirabel kindly shows love to each and every family member, even when they may not include her in several events. She gives Luisa a big hug after hearing her open up. She helps Antonio during a scary moment for both of them.

Now. Of course, Mirabel has moments where she might cross the line, but everything she does is purely out of love for her family.

Meanwhile, the rest of the Madrigals certainly mean well, but they learn a thing or two about appreciating each and every one’s gifts and talents. And they also learn that it’s not just someone’s gift that defines them, and that it’s important to use your gift wisely. And, like almost any family, there’s some tension here and there.

There’s a verse in Proverbs about how the family unit is to be respected and valued.

“The one who troubles his family will inherit nothing, and the fool will be a servant to the wise person.” —Proverbs 11:29

Another strong message in the movie comes in the form of community and helping others. When the Madrigals are shown to be at their most vulnerable, their community steps up to help in a tremendous way. This reflects Galatians 6:2, which encourages us to bear each other’s burdens.

SPIRITUAL: The film’s main note of caution involves the family’s magical abilities. One person is able to look into the future (using leaves and sand) and tell people their future, another controls the weather, and another can heal others’ injuries. The Madrigal’s house appears to be alive and communicates with Mirabel. However, all of the family’s powers stem from a candle that appears to be miraculous or magical. The family seems to believe they have been divinely blessed and that they should use their miraculous gifts to bless others.

The characters seem to be rooted in Roman Catholicism. They pray in front of the candle, a priest character appears a few times, two characters are married in a church, and crosses appear in a few scenes.

LANGUAGE: The worst we hear is an “oh my gosh” and “jeez.”

ADULT CONTENT: The only thing of note here is a brief comment about someone expected to be a Mom to five children (her face looks shocked), and there are a few kisses between married couples.

DRUGS/ALCOHOL: Glasses of wine are seen at dinner.

VIOLENCE: There are some scenes of peril. People are blown away in a windy rainstorm. Mirabel leaps across a gorge and nearly falls during a sudden earthquake. She’s nearly trapped by raging sand as well. There are some close calls, and a semi-scary image of a three-headed Cerberus during a musical number. A house collapses. In a flashback, someone is suggested to have been murdered by sword-wielding marauders. Someone is bonked in the nose repeatedly. Someone has a swollen hand and nose in response to bee stings. A black eye and broken arm are briefly seen (but healed).

Elsewhere, Mirabel is disrespectful to her grandmother at one point. Some family members argue in a few places. One member of the family is able to shape-shift into different people of opposite genders.

“Encanto” (which translates into English as “charmed,” “spell,” “joy” or “delight” ) is a different film for the Mouse House. Instead of a fairy tale or a story that is all about female empowerment, this one is all about the bonds of family (and an imperfect, magical one at that). It’s an infectious, entertaining, well-crafted, and moving film that hit all the right notes emotionally for me. The music is fantastic, the animation is beautiful, the characters are fun, and there’s a strong, heartfelt story at the center. For me, this is definitely one of Disney’s best from the past decade.

There are a few intense moments here and there for little ones, and the Madrigals’ miraculous or magical abilities might be a red flag for some families (particularly Bruno’s ability to see and predict the future). The Bible is clear that attempts at divination are wrong and forbidden by God.

That being said, the film’s magical elements seem fantasy-based and do not appear to originate from witchcraft, demonic or occultic influence. Rather the message is that despite ups and downs, belonging to a caring, loving family is the real magic.

Ultimately, with strong positive messages on familial love, honesty, and community, and relatively few content concerns, “Encanto” is a film I enjoyed overall.