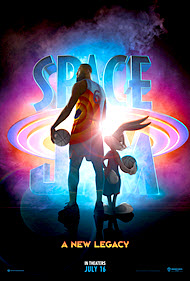 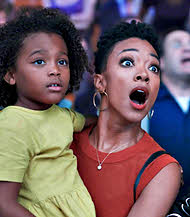 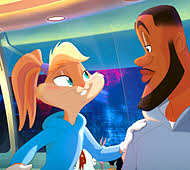 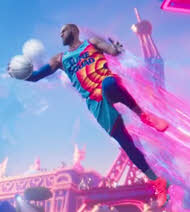 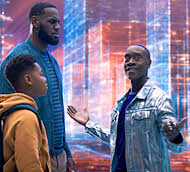 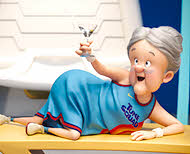 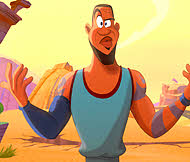 The fictional version of LeBron James in “Space Jam” has always lived under someone’s shadow. Ever since he was a little boy, all his coach wanted him to become was the best basketball player he could be, but all LeBron wanted to do was hang with friends and even play a video game or two. However, like he was told, “You can become the best the world has ever seen, but to do that you have to have your head in the game at all times…”

Flash forward decades later, LeBron is all grown up, married and has three kids: a daughter, Xosha, and two sons, Darius and Dominic, aka “Dom.” The eldest son Darius is a wiz when it comes to playing basketball. Dom, though? Dom is good, but that’s not what he’s passionate about. He’s more interested in creating video games based on basketball, rather than PLAYING basketball himself.

LeBron, however, doesn’t want to listen. He wants both of his sons to become skilled basketball players, and to push them until they are the best.

One day LeBron is called to a meeting with some Warner Brothers public relations executives (and, of course, Dom is forced to attend this meeting with Dad). The PR executives, according to their computer algorithm called Warner 3000, want to take digital scans of LeBron and insert his likeness and voice into previous Warner Bros. films (e.g., Harry Potter is replaced with LeBron, etc.). LeBron thinks this is beyond ridiculous and just wants to stick to basketball.

When Dom joins in on the conversation, Dom and his dad have a falling out, and Dom runs off into other parts of the building. LeBron goes after him. Meanwhile…

Inside the WB Serververse is the artificial intelligence algorithm (AI) that came up with the idea of “switching major movie characters with LeBron,” Al. G. Rhythm (al-g-rithm, played by Don Cheadle). He’s not entirely pleased that LeBron shot down his idea and called it dumb right to his face (Al. G. Rhythm can watch and listen in to conversations through security cameras, computer cameras, etc.)

So how does Rhythm return the favor? By warping LeBron and Dom into the Serververse and then kidnapping Dom.

Rhythm tells LeBron that in order to get Dom back and return to the real world he’ll have to assemble a basketball team and face Rhythm in a good old fashioned game of basketball. If he loses, he’s stuck in the Serververse forever.

After their brief conversation, Rhythm sends LeBron to Looney Tunes World where he meets Bugs Bunny. Bugs tells him that the rest of the Toons have run off to different worlds and left Bugs all by himself.

It’s up to Bugs and LeBron to assemble the Toons, harness their inner looney-ness and save the day before it’s game over for everyone….

Does anything in that synopsis sound familiar to you? It may, because the plot is fairly similar to the original 1996 “Space Jam” starring Michael A Jordan (who decided NOT to return for “Space Jam: A New Legacy” and probably for a good reason).

Let me break down the similarities between the original and this one: You have a pro-basketball player as the lead character, the Looney Tunes are a key factor in the whole story, the opposing basketball team is a dark version of Looney Tunes, there’s an evil villain who plays dirty throughout the story. I could go on and on, but to do so would not only spoil “A New Legacy” but also the original “Space Jam.”

At times, it felt like this new movie was a tribute to LeBron James. I should have kept a tally of how many times a character in the film referenced something he did in his basketball career, his entrepreneurial achievements, etc.

Now, please, don’t get me wrong. There is a lot to like in this new version. For one, this it seems a cleaner than the original, and trust me I remember the original. Yes, there is some cartoon violence to be aware of, but it never extends beyond what you might expect a Looney Tune to do (e.g. Someone gets hit with an anti-gravity ray, but isn’t hurt). The language is relatively clean this time around, though I don’t remember much to be concerned with in the original “Space Jam.” Lastly, what I appreciate about this version as compared to the original is that there is a central theme surrounding the film—an actual lesson to be learned.

Still, I feel like, after 25 years since the original came out, there could have been something more original.

Vulgarity: For 5 seconds a character curses (it is completely bleeped/censored out), “son of a glitch,” “sucks,” “freaking,” “Shut up” (2)

Nudity: A character has to cover themselves when their fur falls off.

Alcohol: A character gets drunk on carrot juice. Another character drinks a martini.

With regards to “A Clockwork Orange,” while there was a scene regarding the character Alex being used in the “A New Legacy” trailer, I did not notice this scene in the film.

Throughout the film we bear witness to how frustrated Dom becomes because his father refuses to listen to him about his real interest: designing video games. Dom gets so mad he says to his father, “You’re the reason I now hate basketball.”

The role of a parent is so critical in the overall well-being of the child. How you choose to support, love and care for a child both physically and spiritually will determine how they grow as a Christian. In movie-Lebron’s case, perhaps he didn’t feel the love and support from his family and friends that he needed to pursue his real interests, and it turned him into something he didn’t recognize.

The Bible tells us what the role of a parent is:

“Train up a child in the way he should go; even when he is old he will not depart from it.” —Proverbs 22:6 ESV

“Fathers, do not provoke your children to anger, but bring them up in the discipline and instruction of the Lord.” —Ephesians 6:4 ESV

“Behold, children are a heritage from the Lord,
The fruit of the womb is a reward.
Like arrows in the hand of a warrior,
So are the children of one’s youth.
Happy is the man who has his quiver full of them;
They shall not be ashamed,
But shall speak with their enemies in the gate.” —Psalm 127:3-5 ESV

However, CHILDREN, our responsibility is to listen and obey our parents when they give us instruction, especially spiritual guidance…

“Honor your father and your mother, that your days may be long in the land that the Lord your God is giving you. —Exodus 20:12 ESV

“Listen to your father who gave you life,
and do not despise your mother when she is old.” —Proverbs 23:22 ESV

“A New Legacy” attempts to bring new life to an old franchise, which in my eyes is always commendable. There’s a heartwarming, if not somewhat clichéd, message about parenting and listening to your children in the film that is nice along with nostalgic moments, some lunacy and moments that might even make the kid in YOU chuckle.

“Space Jam: A New Legacy” is not squeaky clean by any means, however, one might argue that it is as clean a film as you’re going to find. This is not to say, however, it warrants a recommendation. Overall, use your Christian discernment parents in deciding whether or not to attend this film. Discernment is strongly advised.

Neutral
Neutral—As a teenager in High School, in late 1996 my friends and I joked that we all wish Gym Class basketball was fun like Space Jam. However, after recently seeing the sequel A New Legacy, I was disappointed, while this sequel did indeed have superb special effects and great Movie, Pop Culture references. It was very upsetting that the legendary actor Bill Murray was not in this film, like he was in the first Space Jam, him and Wayne Knight were superb comedic talents that made the original shine.

Lebron James is OK, but he is no Michael Jordan; the plot and storyline of this sequel seems unoriginal and a lazy copy of the first film, only with different actors. The first Space Jam film had better special effects for it’s time, a better cast and more high profile NBA players, on the bright side, A New Legacy had good Christian themes of teamwork, cooperation, friendship, loyalty and the importance of being a loving, supportive parent.

Overall, I don’t recommend this sequel, barely adequate sequel movies like A New Legacy are a waste of time and money to watch, plus they cheapen and ruin the greatness of the Original Films in the Series. I love a good Sequel Movie, provided it is done correctly
My Ratings: Moral rating: Good / Moviemaking quality: 3½
Jeff Andrew Winters, age 41 (USA)
Neutral—Okay so I’ll start by saying That I would have been impressed by this, if it hadn’t been the Lebron James show. I don’t love or hate the guy, but I paid to see the Looney Toons, and I feel cheated cause that’s not what I got.

It was mostly clean, besides a few words, but it was just a bad movie that spent WAY too much time to get started. If you want a good family film might I recommend the “Boss Baby 2” or rent “Luca” from Disney, but just not this thing.
My Ratings: Moral rating: Offensive / Moviemaking quality: 2½
Chris, age 31 (USA)