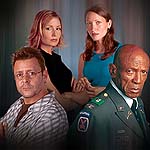 Are we alone, or is there life elsewhere in the universe?

Did a “Martian” meteorite prove the existence of ET?

Were the nephilim (sons of God) of Genesis 6:4 extraterrestrials?

Cloud Ten Pictures is best known for its productions of “Left Behind—The Movie” and the “Apocalypse” film series (“Apocalypse,” “Revelation,” “Tribulation,” and “Judgment”). Judging by the titles above, you can see that this Canadian Christian film company has focused a lot on end-times films. But their most recent releases have thankfully strayed: “Waterproof” (starring Burt Reynolds) and “Miracle of the Cards” have nothing to do with biblical prediction and prophecy. “Deceived” is mixed. It doesn’t scream “end-times”, yet the sci-fi supernatural theme certainly has those undertones.

Sci-fi-loving Christians will feel at home with “Deceived”. In fact, many will recognize Michelle Nolden, Deborah Odell, and Ramona Milano from TV’s “Earth: Final Conflict,” “Relic Hunter,” and other shows. The cast is impressive and does a fine job at acting in this film. Camerawork and overall feel of this production are also quite good.

Emmett Shaw (Stewart Bick) is a billionaire who has invited an intimate group to visit his remote observatory in the Sierra Nevada Mountains. Their plan: to break one of the biggest news stories in history to the world via webcast. Signs of extraterrestrial life have been received and Journalist Kara Walsh (Deborah Odell), spiritual adviser Reverend Fletcher (Jefferson Mappin), techie Jack Jones (Judd Nelson of “The Breakfast Club” fame), and Program Director Smitty (Michelle Nolden), are all part of the team that will first tell the stunned public.

At the Pentagon, Colonel Garrett (Louis Gossett Jr., “An Officer and a Gentleman”) is heading up a top-secret experiment looking for a way to tap into supernatural power through ESP, meditation and other New Age philosophies. His goal is to make the U.S. an indestructible force that will usher in an age of peace upon the globe. Hearing of the signals received at the observatory and believing his experiments to be somehow related, he takes a military team into the Sierra Nevadas to take charge of the operation and harness the power.

Emmett Shaw is the billionaire who has set up an observatory that is part of a project searching for extraterrestrial signals from space. SETI is the real-life equivalent. Click here to learn more about E.T. from a Biblical perspective.

Once Shaw’s team arrives just before an approaching storm, they find the two men who were manning the location mysteriously disappeared. They begin investigating when Colonel Garrett’s team arrives, takes command, and places Shaw’s team under house arrest. Tensions run high, and when each of the team members tries to listen to the alleged E.T. signal, the bizarre actions begin. Only one Christian in the group, Smitty, has the spiritual discernment to know what is actually behind the signals. Is it really from outer space? She’s convinced it’s not, but warning the others proves to be a formidable task.

Reverend Fletcher serves as the comic relief in “Deceived”. The Rev. hosts the #1 rated daily radio program and has promised his listeneres the biggest story of his ministry career. Of the group, Rev. Fletcher is not the one with spiritual discernment, however. His blend of New Age philosophy and Christian teachings serves to only deceive him further.

This film is not for younger audiences or those who do not like any violence. There are several jump scenes (i.e. suspenseful and scary). Language consists of one “damn” uttered from the career military Colonel. After hearing the supernatural message, journalist Kara Walsh makes several romantic passes toward Shaw, Jack, and the Colonel. The violence mentioned above consists of some arguments, several shootings with bloody results, a hanging, and paranormal activity utilized by a female military lieutenant who uses it to oppose, frighten, and ultimately kill those who oppose her.

Director André van Heerden says: “It’s going to be very interesting to see how people react to “Deceived”. It’s definitely dark and suspenseful like “Revelation”, but it’s also edgier and more intense. While “Revelation” may hold the audience’s interest because of its central mystery, “Deceived” holds it because of the characters. There is a mystery to the picture, as well as elements of romance, comedy, and horror; but the characters are what are so intriguing. Since the characters become so familiar to us, I think many people are going to be drawn into the tale more than any other film we’ve done.” I would agree with this statement. If you’re looking for an inoffensive production where Christian values are taught, an agnostic becomes a believer, and it’s just plain fun viewing, this may be the pick for you.

Positive
Positive—It seemed to take them a little long to get to point of the movie. But once they got there, WOW! It gives viewers a whole new take outlook on how mankind can be deceived by the fouls of Satan.

I didn’t like the fact that the plan of salvation was [not] presented more clearly though. The main actress, Smitty, portrayed by Michelle Nolden seemed to fumble around the Truth. While she didn’t follow the same belief as the “radio reverend” she could have been a little more precise. The only time I heard the name of our Savior mentioned was in a short prayer, of physical deliverance, five minutes from the end of the movie.

I wouldn’t recommend this movie as a “soul winner” but it did have a great story line and wonderful actors. Two thumbs up!
My Ratings: [Excellent! / 4]

Adam, age 25
Positive—Overall, I felt that the movie was well done and deserves a round of applause. The acting was excellent and the story was very intense, exciting, and suspenseful. I have watched nearly all of Cloud Ten Pictures’ movies, and I believe that this latest movie (as of March 2002) probably exceeds the quality of the previous movies. It seems that the director, André Van Heerden, may be improving in his ability.

However, I have a few criticisms of “Deceived.” First, the writers were perhaps afraid to be “too preachy” and let the gospel message fall somewhat to the wayside. Some people will disagree with that statement, but I believe that the gospel message should be clearly presented.

Second, if I had any children I would not want them to watch the movie unless they were about ten years old due to the violence and some inappropriate sexual conduct of the characters. But leaving the criticisms, I think that the movie is a success and will be enjoyed by many. The movie gave a strong message about the sinfulness of human beings and man’s desire to be his own master, while showing that there is hope in Christ to be delivered from deceptive sin and lies of the devil.

Joel Merritt, age 20
Positive—I was excited to watch the newest release from the fastest growing Christian Production Company, Cloud Ten Pictures. Having already set the standard in Christian films with hits like “Revelation,” “Tribulation,” “Judgment,” and “Left Behind,” I prepared myself for another surprise hit.

I was not disappointed as this intriguing supernatural tale of good vs. evil unfolded like a Stephen King classic. Paul Lalonde and John Patus wrote a brilliant screenplay that clearly unmasks the enemy that surrounds those who are searching for eternal answers in modern day science. This story is played out by a superb cast who add depth and life to their characters. The characters are one of the most important elements to the success of this film.

Unlike most science fiction films that depend on special effects and blown up budgets, “Deceived” succeeds with strong character interaction and transformations that make up the mystery and suspense. This is a character-driven story that relies more on the talents of its players than its budget… It’s refreshing to see Christian projects being produced that aren’t ashamed to proclaim the gospel.

“Deceived” not only entertains with mystery and suspense, but it presents the clear gospel message of hope and salvation without being too preachy. Cloud Ten continues to step forward with each project that pushes the limits and sets new standards. Intriguing, suspenseful, and entertaining, “Deceived” is fun!
My Ratings: [Excellent! / 4]

Scott Green, OneWayFilms.com
Neutral
Neutral—“Deceived” could have been a great film, setting the standard for the Christian Film industry, of which I am a close follower. But alas, to my utter disappointment, it failed.

Contact with beings from another world/dimension, a storyline similar in style to a King/Perretti novel, a great cast (who by the way did brilliantly with what they had to work with), a great set and so much more made this seem like the perfect Christian chiller, a genre I pray gets more attention (are you listening Mr. Christian Film-makers). And it almost worked.

Some of the scenes were very tense and the jumps came at the perfect times in the film, but what was that with the Laurel and Hardy music and the scenes that had the unfunny childish humour. Why try and put family type humour into a film that to be honest isn’t a family film and into a story that just begged to be left alone and void of any humour.

Don’t get me wrong I love comedies but I don’t like “hybrid” films in which the film-makers feel like they have to mix a genres together to make the film more appealing to a larger audience.

Cloud Ten did a great job with the Apocalypse series (more please) and “Left Behind,” but this could have been [better]…
My Ratings: [Good / 3]

Chris St. John, age 30
Negative
Negative—Not the best movie in the world. I bought it on DVD for $11.00 at Sams. Somewhat entertaining but it could have been a whole lot better.
My Ratings: [Better than Average / 1½]

John, age 36
Negative—To put it plain and simple, “Deceived” is a disappointing movie. When a movie is said to be “Christian” it should be appropriate for the entire family and not compromise the Gospel message. “Deceived” breaks both of these criteria. There was unnecessary violence, lots of sexual innuendo and even the “D-word” profanity from Louis Gossett Jr.

It is a disgrace to call “Deceived” a Christian movie. All Cloud Ten Pictures seems to be interested in is signing big name has-been secular actors in order to promote their films and make a lot of money. A real Christian movie is about applying the Gospel of Jesus in lives regardless of who’s names are in the marquee.

There are so many great Christian movies that could be made. Too bad we’ll probably never see them.
My Ratings: [Very Offensive / 1]

Paul Separk, Jr., age 35
Negative—Why can a decent Christian movie not be made? This is in the same vein as the cheesy apocalyptic “thrillers” that are so horrible. It pains me to be a Christian and have garbage like this made into a movie and called Christian.

The only good thing in the movie is Lou Gosset, Jr.’s performance. Kudos to him.
My Ratings: [1]

Chris Yeager, age 24
Negative[Lousy] I have yet to see a quality Christian movie of any genre other than THE HIDING PLACE.
My Ratings: [1½]