for for zombie violence/gore and language 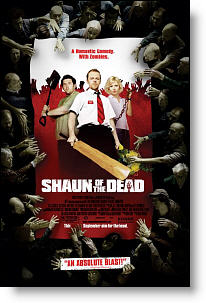 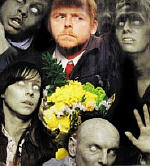 “A romantic comedy. With zombies.”

Must a person be dead in order for them to become a zombie? That seems to be the question not-so-subtly posed in “Shaun of the Dead” the new zombie horror comedy from director Edgar Wright. There is a scene early on that shows Shaun (Simon Pegg) wandering through his London neighborhood on his way to the convenience store. We see him walking to and from the store oblivious to the undead that are now wandering the streets, too caught up in his own world to realize that the homeless man who usually asks for money now simply wants to gnaw his neck off.

He has recently been dumped by Liz (Kate Ashfield), his longtime love, because he is a 29-year-old loser, whose idea of a romantic night is to take her to his favorite tavern, the Winchester. Shaun has become man of routine, and can’t give up the things she wishes he would—his boring sales job, his favorite tavern, his obnoxious best friend and roommate Ed (Nic Frost). So, she lets him go, which would be bad enough, were it not for the zombies now wandering the streets, looking for their next meals.

Shaun wants to protect Liz, his friends, and his mom (Penelope Wilton), so he devises a scheme to save the day. He will simply round them up and take them to, of course, the Winchester, his Mecca, where they will somehow stave off the walking corpses.

“Shaun of the Dead,” is a satirical homage of sorts to the zombie film genre, of course begun by the legendary George Romero. You don’t have to have seen his films to probably be somewhat familiar with the genre. The recent remake of Romero’s “Dawn of the Dead” and “28 Days Later” have acquainted a new audience with the genre, and this film could open up a nice new dimension in zombie films, the zombie comedy.

The film, which was co-written by Wright and Pegg, has plenty of laughs, and no, not all of them come from the leads beating zombies with cricket bats. One of the movies best scenes comes when Shaun and Ed decide to use old records to decapitate the two zombies infesting their backyard, and argue about which ones are worth throwing.

There is one rather surprising twist to the movie, however, and that’s the very intense, almost real, dramatic scenes which pop up throughout. Pegg and the rest of the cast are great in their comedic roles, but show rather believable depth when the dramatic scenes come up. The scenes almost feel out of place among all the gore, and in those moments you can see the very real acting talent possessed by the cast.

Bill Nighy (“Love Actually”) steals his few scenes as Shaun’s stepfather, who is mostly in the film for the laughs he brings, but even his scene before he succumbs to the zombie curse is somewhat powerful.

“Shaun of the Dead” is very violent, and while some of it is played humorously, ala “Kill Bill,” some scenes very much fall under the horror category. One disturbing scene, not played for laughs, shows three kids devouring the corpse of an adult. Parents should be cautious about allowing their children to go see this one, not only for the violence, but also for the constant strong language typical of most British comedies.

As a horror movie buff and one who can appreciate British humor, I thought that “Shaun of the Dead” was a very funny film. It shows us that while the dead are obviously zombies, some of us among the living who lead dull, monotonous lives may very well be also. I rate the movie as a “B.”

Positive
Positive—Ok, yes this movie had lots of bad language and violence. But I found it very very funny! Me and my wife we’re laughing so hard I almost fell out of my seat. For Christians that are so heavenly minded they’re no Earthly good… don’t even bother with this one. But if you have a great taste in humor (that good ’ol Monty Python) then you’ll love this film.
My Ratings: [Average/4]
Scott, age 26
Positive—This film is brilliant british humor, with american style special effects. It’s not for people under seventeen, there are some offensive scenes. However, if you like Monty Python or Dark Adder give this disk a spin.
My Ratings: [Extremely Offensive/5]
Amir Zal, age 22
Positive—I admit that I am not approaching this film as a Christian, but I cannot help but hail it as the brilliant introduction to a new genre of film: realistic horror. I, myself, am a huge horror (especially zombie horror) buff, but appreciate nothing more than a good laugh here and there and find myself dealing with real-life trials, no matter how terrifying, using humour. For those who appreciate dry, British humour (despite choice words deemed acceptable in their culture and immoral in ours), this film will provide many laughs.

Though, as the reviewer stated, the real surprise was the poignant drama. I found myself nearly crying during certain scenes because I had developed such an affection for the characters in jeopardy.

Overall, this film does not present a Christian-friendly world-view… but neither does any zombie or horror film. Horror is a genre that is created merely for wallowing in the subversive and immoral aspects of the world.

If you want a relatively accurate portrayal of what might happen were a zombie invasion to occur, pick up “Shaun of the Dead” and laugh heartily… But if you want to serve the Lord, stop fooling yourself into thinking any movie portraying horror and occultic themes are appropriate for you or your family.
My Ratings: [Extremely Offensive/5]
Kehli Kytlica, age 19
Neutral
Neutral—This movie did have some funny moments, but for the most part I thought the humor fell pretty flat (and I normally adore Brittish humor). IT was also pretty grotesque, at one point during a zombie feast, my boyfriend shielded my eyes, and I have to say, I was grateful. For sure this would have traumatized me as a child, and all that violence just isn’t good for kids or young teens to see, especially if they can’t understand the concept of parody. It wasn’t a terrible movie, but for a better Horror spoof, I’d advise you to rent Scary Movie 3.
My Ratings: [Very Offensive/2½]
Kat, age 19
Negative
Negative—A very violent movie with zombies eating corpses and a particular scene with a main character being torn apart and eaten alive. No redeeming factors. The humour is a failed attempt, the acting of the living is not much better than of the dead and there is a fair bit of swearing and taking the Lord’s name in vain. Save your money and see something better.
My Ratings: [Extremely Offensive/2]
Chris Butterworth, age 30
Negative—This film was completely upsetting to me as a Christian. It made me cry and I walked out right away. I wasn’t sure what it would be like, but I heard from my Jewish and Muslim friends it was really good, but it wasn’t at all. It had the walking dead and that is completely against the Bible. It was a hellish movie, and I suggest no one sees it ever and everyone boycotts it right away.
My Ratings: [Extremely Offensive/1]
Linda Noiega
Comments from young people
Negative—I expected this movie to be funny, but it was a total waste of time. There was nothing bad in it except for some language. The story plot was horrible. It wasn’t funny at all. Don’t waste your time or money seeing this movie.
My Ratings: [Good/1½ ]
Kirin Sails, age 13
Positive—I thought that this movie was great. IT was VERY violent, with a lot of profanity, but a good movie none the less. I am one who is not easily offended but feel that even though kids my age (16-17)will see it, they should see it with an adult, if at all. It was very fun and funny, but not the kind of movie to take a first date to or for the whole family.
My Ratings: [Extremely Offensive/4]
Ladd Carabell, age 16
Positive—I for one could not wait for this movie to come out. I felt that people were in desperate need of a truly good horror comedy/parody. This movie was in my opinion one of the best horror comedies I’ve ever seen. The acting was top-notch and the writing was superb. The comedy was smart and witty, unlike the barrage of potty-mouthed, relentlessly stupid and obscene horror/comedies we have the unpleasureable experience of viewing, compared with the incredibly stupid scary movie series this movie is a triumph. I hate to admit it, but once again the Britts have out done us once again.
My Ratings: [Average/5]
Joe Reed, age 15
Positive—Wow. This movie is amazing… don’t see it if you get queasy at the sight of blood… this is brilliantly done and actually pretty funny. Maybe I’m only saying this cause I’ve liked zombie movies my whole life… And if your child is truly a Christian, then how can one measly movie change their view on God?
My Ratings: [Average/5]
Jon, age 14
Movie Critics
…slapstick disembowelments…
Steve Schneider, Orlando Weekly
…running foul language, most of it strong…
Eddie Turner, Movieguide
…perverse, gruesome and profane cesspool… a splatterfest… Some of this stuff is really nauseating…
Christopher Lyon, Plugged In
…The constant stream of in-jokes… quickly grows tiresome…
Jeremiah Kipp, Slant Magazine
…oafish jokes… A spoof that isn’t funny… grafting genre onto genre without the requisite cleverness to distinguish itself…
Ed Blank, Pittsburgh Tribune-Review