for strong horror violence throughout and some nudity. 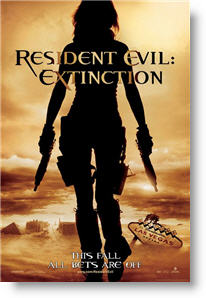 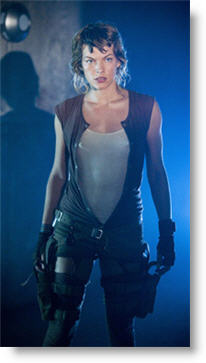 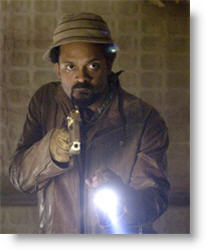 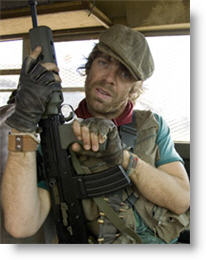 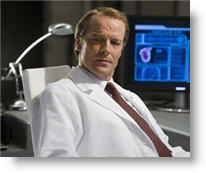 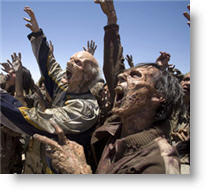 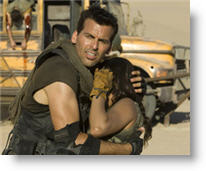 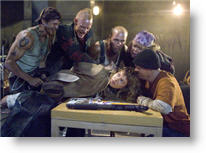 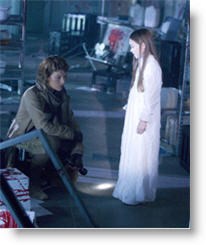 “A zombie needs only one thing… The Living”

Here’s what the distributor says about their film: “Alice, now in hiding in the Nevada desert, once again joins forces with Carlos Olivera and L.J., along with new survivors Claire, K-Mart and Nurse Betty to try to eliminate the deadly virus that threatens to make every human being undead… and to seek justice. Since being captured by the Umbrella Corporation, Alice has been subjected to biogenic experimentation and becomes genetically altered, with super-human strengths, senses and dexterity. These skills, and more, will be needed if anyone is to remain alive.”

“Resident Evil: Extinction” is the third movie in the series. The films are very loosely based on the games. The movies do not necessarily reflect the games, since the movies have made up some of their own characters, and they don’t follow the game’s plot line. Even the characters from the games that appear in the movie are drastically different from their game counterparts.

The movie begins by showing that the Umbrella corporation is cloning Alice. The ones that fail the series of tests meet a violent death and are thrown into a trench. It has been five years since the last “Resident Evil” movie, and Alice now wanders by herself. The world has become infected by the T-virus at this point, and there are only a handful of survivors left. Along her journey, Alice finds a notebook that says there is an isolated place in Alaska that is free of infection. The movie also features Carlos and LJ from the last movie. They are traveling around with a large group of people led by Claire Redfield (from “Resident Evil” games 2 and “Code Veronica”). Alice meets up with the convoy, and they make plans to head towards Alaska.

Issues in this movie that may offend Christians include violence, language, and nudity. This is a zombie movie, so obviously it is very gory. Most of the violence is directed towards zombies, however there are a few scenes where people kill others. Early in the movie, Alice is captured, and she kills one of her captors. The rest are killed by zombie dogs after she escapes. Alice also kills a few Umbrella scientists by shooting them. Characters die gory deaths by zombies, crows, and in many other ways. Of course, the zombies are also gory to look at. The language is pretty mild for the R-rating, but many of the same words are used over and over again. The characters use words like B****, S***, D***, A**, and God’s name is used in vain a few times. LJ also makes a reference to porno, but in a joking way when he walks into an abandoned motel.

Nudity in this movie is not done in a way that is really exploitive. A female zombie is partially exposed, for example. There are also brief shots of frontal nudity of the Alice clones. Some of the female characters wear outfits that can be seen as revealing, but it is not completely unwarranted, with the movie setting being in the desert most of the time.

Another issue is that the movie sort of glorifies smoking, but less than the last movie did.

The good things about this movie are that the convoy works together as a family would. They all care about each other deeply. There is a concern for others in the group. After a bunch of the people die, the surviving members of the convoy bury their dead and set up crosses. Sort of shocking, in a good way, that they would use a Christian symbol. In one scene Carlos saves one of the teenage girls in the group. He is bit as a result and is infected. He sacrifices himself later to help the group.

Alice, as a character, has both good and bad qualities about her. She saves her friends and feels bad when someone dies in her group, but she is unforgiving and seeks revenge. She has dedicated her life to bringing Umbrella down, and rightfully so, but she is unloving towards the people behind Umbrella. The Bible calls Christians to love their enemies, by doing this they pour burning coals on their enemy’s heads.

As a “Resident Evil” fan and Christian, I have mixed feelings about this movie. I liked the movie, but as a fan of the series, I wish that it would be closer to the games. Overall, I liked the movie, but feel that it was a bit rushed. A casual movie-goer probably wouldn’t get it, because it is so much dependent on the other two movies, which isn’t a bad thing necessarily.

If you liked the other two movies, or you’re a fan of the games and don’t mind the different storyline too much, then this movie is for you, but if you don’t have a strong stomach, then it probably isn’t for you.

Positive
Positive— First of all, justifiable violence does not offend me. I know for many that is not the case. By justifiable, I mean realistic to a given situation. A war movie may show explicit violence, which is realistic to the story. Conceptually, I am intrigued by the story of science gone wrong, resulting in zombie like creatures (a horrible summary of the story). If something like that could occur, we all would fight to survive. Obviously this movie contains extensive violence.

For me, the most offensive things in the movie were the profanity and a near rape scene. The b-word was used several times. My memory isn’t the best, but I don’t believe the f-word was ever used, while I recall one use of the “S” word and one “A-hole.” One scene depicts some evil survivors, one who began to run a machete up the main character’s leg, while making some crude innuendos. It ended abruptly, but was difficult to watch. I should note that the main character is nude in several scenes, but in a non-sexualized manner. At no time is there full frontal or full rear nudity, so it wasn’t stumbling to me.

I know many would have a serious problem with seeing this movie as Christians. I, however, think that most sit-coms with extensive sexual humor are much more offensive. I have been a fan of the video games for several years, and the movies approach to the story has been interesting.
My Ratings: Offensive / 4

Jeff, age 36
Positive—Being a Sci-Fi fan I enjoyed this third adaptation film of the video game “Resident Evil”. No Christian theme of mention of religion here just plain old bad science gone wrong. I recommend this movie, but only if you have seen the first two. Great effects in this one, with a solid story line that flows along. …
My Ratings: Average / 5

Mark, age 28
Positive—I LOVE all of the Resident Evil movies! The Woman who plays Alice in them (Milla Jovovich) is my heroine and Alice is also my heroine! I have seen some very negative comments morally on these movies! I as a proud owner of all of these movies see nothing but severely brokenhearted people risking their lives to fight against what has caused their pain and also they are fighting to stay alive and to defend themselves and others!
My Ratings: Moral rating: Good / Moviemaking quality: 5

Malachi, age 20
Neutral
Neutral—This movie could have been a lot better. Some parts seemed cheesy. The story line was interesting, visuals were good. However, the characters lacked a lot in every way. There was nothing relate-able in this film. However, not a lot of profanity, no nudity (you see ALice floating in a bubble wearing nothing, but she is covered completely) and the violence was present, but not too graphic. This movie is for people who like typical zombie movies! I was not completely impressed, but it kept me entertained somewhat for the hour and a half. Not for people under 17 please.
My Ratings: Average / 4½

Comments from young people
Positive—I have been a fan of the “Resident Evil” movies ever since I saw the first one on the Sci-Fi channel about three years ago, so naturally I had to go see the latest third installment with a friend of mine (also a fan). I must say, I was pleasantly surprised at what I saw in the third film. Even in its second sequel, the RE franchise is still staying alive. The action is plentiful, the one-liners are snappy, and the acting is excellent for something of this genre. Contrary to the rating, there is no nudity. Also, there is very little language. There is, however, violence. Lots and lots of violence. Zombies are shot, stabbed, burned at the stake, impaled, blown up, and mauled in many other gruesome ways. Squeamish be warned, this is a very violent movie. The storyline is very redeeming though, and the movie has a strong message of unity and faith in team members to get out of a sticky situation. 7/10
My Ratings: Average / 4

Will DeFehr, age 14
Neutral—I am happy to say this film was a MAJOR improvement on its predecessors, and I am also going to report that that’s not saying much. Style, while the first film had a lack of it and the second did a horrible job of trying to have an over-abundance of it, this film actually did pretty good with it. It was cheesy at times, and it had its problems, but it was going relatively well until the end where it returned to the seconds poor use of cheesy super-zombies, which I hated. C+
My Ratings: Moral rating: Offensive / Moviemaking quality: 3

Joshua, age 14
Positive— I watched “Extinction” without having seen the other two movies, so I did find it a bit confusing. Now that I’ve seen the others, I realize that the plot is very good and draws you in well. Content: The language was less than I’ve heard in most PG-13 movies, with no F-Word, maybe 2 S-Words, and a few uses of B****. The sex was also mild, in comparison to the other two, with no full frontal or rear nudity, and one instance where LJ walks into and abandoned motel and says: “I’d like to rent a room with a water bed, shower, and I wanna rent me a porno.” The violence was also mild for an R, with the goriest thing being a zombie pinned to a truck after getting shot in the head with a crossbow. Overall, a good action movie, but not for the weak at heart, and, since it doesn’t make as much sense without having seen the other 2, I might not recommend it, because the other two had a lot of garbage.
My Ratings: Moral rating: Average / Moviemaking quality: 4½