The Cabin in the Woods

for strong bloody horror violence and gore, language, drug use and some sexuality/nudity. 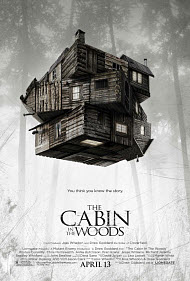 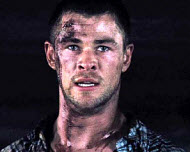 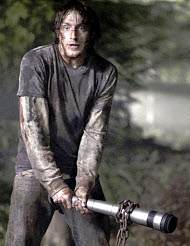 lost in the forest

Why do some people enjoy watching horror movies, especially those that feature young people being killed?

“You think you know the story. Think again.”

Very soon after “The Cabin in the Woods” begins, we are exposed to the sight of a lovely young woman parading around in her underwear. It’s meant to be titillating, and it IS titillating. Of course, you have to expect that in a movie like “The Cabin in the Woods,” which is simultaneously a slasher flick, an homage to slasher flicks, a criticism of slasher flicks, and a re-invention of the slasher flick. And every slasher flick MUST HAVE at least two girls—one a proud slut and one a virgin (or, in this case, someone who seems virginal when she’s standing next to the proud slut). And yes, the proud slut dies first. And yes, she dies because she’s having sex. Had she been a prudent Christian, she might be alive to read this review.

I was nine years old when I became aware of the “Friday the 13th” movies. I was forbidden from watching them; told they were violent, evil and bad. Some people even tried to tell me that I’d become demon possessed if I watched one. I finally watched one when I was 10, after my relentless pleading wore down my father, who insisted on watching it with me. I slept well that night. Demons didn’t possess me, and I was proud of my maturity.

Later, I read an essay about the “Friday the 13th” movies. The writer said the films” tone was quite parental. All the kids who got killed did drugs and had sex. The good kids, the ones who said no, always survived until the end. Maybe that’s true, but I wouldn’t recommend “Friday the 13th” to a Sunday School class. I wouldn’t recommend “The Cabin in the Woods” either.

People in horror movies are maddeningly stupid. If you knew that a homicidal maniac was lurking outside your house, would you go out there alone? “The Cabin in the Woods” solves that problem by inducing temporary stupidity in the characters. It’s quite ingenious, actually. It moves the story along and extends a middle finger to creatively dead screenwriters of low budget slasher movies everywhere.

The real joy of “The Cabin in the Woods” comes in its final act, when two of the characters descend into a subterranean labyrinth whose contents could well explain every horror movie ever made. The bad guys in this movie are zombies, but it could just as easily have been werewolves, a giant snake, a phantom, an evil clown, or a little girl with a giant mouth on her face. The survivors clue in that they are part of a scientific experiment that is also a ritual. It all kind of falls apart at the end, when we get the big explanation as to why this must be done, but that doesn’t matter too much. Most movies have a lot of loose ends, but, for some reason, I was able to forgive “The Cabin in the Woods” for its share.

Okay… so there’s some scantily clad women, and, in one scene, we see a woman’s bare breasts (this seems to be essential to the plot, as she and her boyfriend’s near fornication is watched eagerly by a group of technicians.) The guys also strip down to their skivvies. That might be a red alert for women struggling with lust, but it did nothing for me.

Of course, there’s lots of violence. Someone gets their head sawn off. Someone gets a knife in the head. Someone has a truly spectacular motorcycle crash and lots of scientists, SWAP team members and monsters are brutally killed by each other.

The profanity is moderate, but not over the edge. I detest doing F-word counts and S-word counts. It’s so patronizing. But, if you must know, those words do make a few guest appearances in this movie. I believe Christ’s name was taken in vain twice, which makes me elevate this movie to the very offensive rating.

Editor’s Note: Bottomline—Christian Spotlight does not recommend this film. As the volunteer reviewer mentioned, there are definite issues of concern to Christian viewers—primarily extreme violence and gore for entertainment’s sake, plus illegal drug use, foul language, and titillating nudity—all R-rated. As always, Christian Spotlight publishes comments from other viewers to provide a more complete picture of the pros and cons of the movie, however, we expect that most Christians will not view this movie, so viewer comments will be sparse.

Positive
Positive—Well, here we have it. The ultimate horror movie. The horror movie that slaps all other horror movies in the face and belittles it passive aggressively. Ladies and gentlemen, what we have here is a doozy. To start off with, let me say for the record, I don’t enjoy horror movies for the blood and gore, but being a film student and fan of film, I enjoy the older classics. When I saw all the references to Evil Dead, I already wanted to see this film just to see how it would hold up, and my goodness, I was in for a movie riddled with a plot twist worthy of being in LOST.

This film takes the idea of a horror movie, and says “Hey, these movies can have a story and NOT just be two hours of sex, blood, and violence!” and it proves it, strongly. Yeah, there’s language, but it isn’t every other word, instead it’s actually surprisingly fitting when it’s inserted into the script, allowing the story to be believable. Yeah, there’s blood, but unlike modern horror films, this one cuts away before some of the most graphic moments. Yeah, there’s even nudity, but the couple doesn’t even begin having sex before they’re attacked by zombies. See all »
For the people reading this wondering how it stands as an actual film: Fantastic. The pacing is excellent, almost making you wish for a break, but not making you wish it would hurry up. The dialog, acting, all excellent (this is the film that landed Chris Hemsworth the role of Thor… yeah), and the cinematography works with the film, adding tension to the film when it needs it. Also, humor, an incredibly difficult thing to pull off in a movie like this, is done to perfection.

I would almost call this a psychological thriller with sci-fi and dark-comedy elements actually. This isn’t a straight up horror film, but then again, if you know film, you probably know already “horror” is such a misinterpreted term. So what is it that makes this many steps above a horror film, scoring a 93% on Rotten Tomatoes?! Well, I can’t tell you, because that would spoil it. This is one of those movies you don’t want to hear anything detailed before viewing.

What I can say though is for anyone who saw it, and blindly/ignorantly rated it Very offensive just because it’s in the Horror genre, listen up, because you obviously didn’t pay attention to this little detail: This movie has symbolic references to Heaven, and Hell. Lemme explain ***SPOILER***: There’s a facility keeping an eye on the cabin, sort of controlling events, and the intern comments when the crew bets on how the teens will die, asking, “Won’t your superiors be upset?” and one man casually remarks, “Downstairs doesn’t care about what we do up here.”… What does that sound like? Oh need another one? When the cave entrance doesn’t collapse like it should, one man remarks it was “reported as a glitch from upstairs.” to which the other man replies concerned, “what do you mean upstairs?!”

What’s my point? My point is while this was a fantastic movie, it’s also a movie that shows if you pay attention, it might not be as horrible and offensive as you might think, and is actually telling a story that sometimes, no matter what hell wants, “Upstairs” always has the ultimate say…

Richard G. Ives, age 20 (USA)
Positive—When I read this is nothing like you think it will be, I was hooked! Eye candy and a great twist on an overdone genre. I liked the concept and can only say a few things without giving it away. As a Christian, I have to put it all in perspective. I thank GOD I have already been given the answers and can keep the world at arms length, so to speak. A good matinée!
My Ratings: Moral rating: Very Offensive / Moviemaking quality: 4½

Lynn Stahlecker, age 58 (USA)
Negative
Negative—The gore, language and sexual aspect is shoved right down your throat, and the underlying message of the film is downright demonic. While it certainly isn’t what you’d expect, it just isn’t creative enough to justify laboring through all the moral issues, and a watchful eye will decipher the “twist,” which is anything but mind-bending, as early as the opening credits, and will be left with a solid hour and a half of convoluted gore, gags and suspense, in what seems to be a film that was written with aspirations of simply achieving cult classic status.

Fans of the horror genre and films such as “The Hills Have Eyes,” “Evil Dead,” “Army of Darkness,” and the like will get a kick out of “Cabin in the Woods” indistinct story telling style and different outlook on the standard “teens go to a cabin for the weekend, when everything goes wrong” base plot, but if the horror genre considers this a smart film, it speaks volumes about their audience.
My Ratings: Moral rating: Extremely Offensive / Moviemaking quality: 2

Ethan S R, age 23 (USA)
Negative—This is one of those movies you wish you could just wipe from your memory. I am shocked by the storyline and having the two survivors seem more moral than the technicians and controllers trying to get their little “ritual” done was disturbing. This movie reminded me how close to the end we are, as the open and almost taunting blasphemy against our Heavenly Father leaves you saddened and shocked. I am so grateful I took the time to get to know our Heavenly Father by studying his Word and continuously striving to foster and tighten a relationship with our Heavenly Abba Father that fills my heart with His peace and love. This movie made me feel dirty from the inside and sad that I was asked to see it. There are some truly desensitized people out there. If you are a Christian I strongly suggest you do not watch this movie.
My Ratings: Moral rating: Extremely Offensive / Moviemaking quality: 4