for sequences of strong violence throughout. 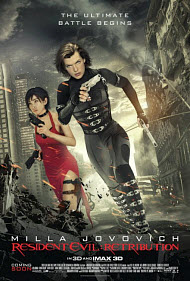 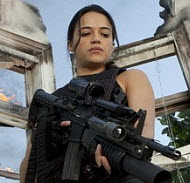 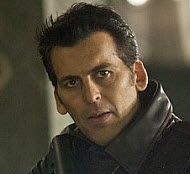 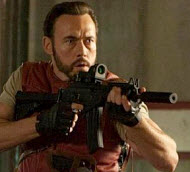 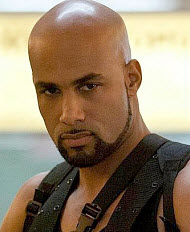 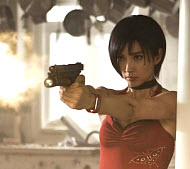 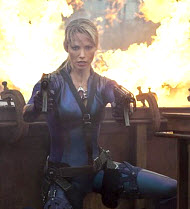 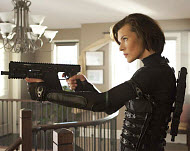 “The Resident Evil” franchise holds a somewhat special place in my heart, despite my being fully aware that each of these films is a convoluted mess. The joy is that the franchise has embraced being self-aware of the plot holes, lack of character development, and stilted acting. “Retribution” (the fifth film in the franchise) has been marketed with the tagline “evil goes global” and is said to be the final film in the franchise. Well, I have good news and bad news. The film does not “go global,” as all the set pieces (minor spoiler that is explained in the beginning of the film) are simulated areas used for Umbrella Corporation testing. Secondly, for all intents and purposes, this is not the final film. I will leave it to you to decide if this news is good or bad.

“Retribution” continues right after “Resident Evil: Afterlife” left off. Alice (Milla Jovovich) and a large group of survivors she rescued are on the ship Arcadia. Relief is short-lived, however (as shown at the end of “Afterlife”), as the Umbrella Corp sends planes in full force to eradicate these last survivors. Alice is thrust off the ship and drifts unconscious in the ocean, later awakening to find herself as a suburban housewife (stay with me). In this life, she and her family are ambushed by the infected. Alice herself is attacked, but then wakes up to find herself in a subterranean Umbrella testing facility. The entirety of the film revolves on Alice escaping the facility with the outside aid of a motley crew of new and familiar faces, assembled by Albert Wesker (the former head of Umbrella Corp). Opposing Alice’s freedom is Jill Valentine, once Alice’s ally, but now controlled by Umbrella with a single mission: eliminate Alice.

“Retribution” is an interesting anomaly to observe and dissect. There is some fun to be had. The film, unlike any other in the franchise, plays out just like a video game. Each simulation area (New York City, Moscow, and Suburbia) play as a level, each with its own unique setting and enemies. Before exiting a designated area, an infected “boss” is initiated. If defeated, access to the next area is granted. The goal is for Alice to escape and reach the surface so that she can get to Washington D.C. and cure the infection. This is an interesting concept and executed fairly well. The downside is that this film is marketed as a global romp from city to city expunging all enemies, while saving the human race. What the audience actually gets is 90 minutes of Alice trying to escape a building so that the movie can actually begin. Watching the film for simply what it is gives you—an action-packed adventure that does not bore, but lacks substance. With the preconceived ideas going in, you are left with what feels like a feature-length trailer for the 6th movie that you believed was the movie you came to see. This is deceptive marketing at its best. There is no closure and definitely no answers to the main issues plaguing the characters. While watching, I could not shake the feeling that the entire film could have been done as the introduction to the real film that will be the 6th installment—resulting in one movie and not two.

The relationship between Alice and her daughter is by far the best part of the story. Humanity, in these films, is portrayed as evil, violent creatures, but even though Alice kills infected throughout, she is protecting her family and showing actual emotion that is nonexistent in the rest of the one-dimensional characters. The franchise also has been quite positive in its portrayal of female characters; they are portrayed as strong-willed and not over-sexualized. There are some scenes in the series that have Alice in little attire, but it is never portrayed in a tantalizing way. These two things can be a positive to viewers who may see this as a film that exploits its female characters.

2 Peter 3:13 states: “But according to his promise we are waiting for new heavens and a new Earth in which righteousness dwells.” As humans, created by God and saved through Christ, we are promised retribution through the sacrifice of Jesus. His promise, as stated in the Scripture, is that while in our Earthly domain, we are preparing our way for the new heavens and Earth, which brings God’s fully sought-out righteousness. In this movie, Alice is seen as the savior to humanity. She is the only one who can bring a solution to the virus that plagues the world. The sacrifices of others are what aids Alice’s mission of retribution for humanity.

This positive aspect of Alice’s character is what needs to be explored in the film, reaching to the inevitable conclusion of her saving the world from Umbrella. The sad, unfortunate truth is that you will not get to see this play out until a 6th installment is sent to theaters. “Resident Evil: Retribution” is, by itself, a simple action film that entertains but delivers nothing short of preparation for the next film that this movie promised it would be. For a film that seems split in two for box office revenue only, what really would cause you to just stay home and wait for the next film, knowing this one really has no purpose in existing?

Next, I will mention the film’s objectionable content. Be advised that these contain spoilers.

Sexual Content: Alice is seen in a white room in what appears to be somewhat of a hospital gown that has no covering on the sides of her body. The front and back areas are covered. A husband and wife wake up in bed, and the wife is seen in her underwear. The wife and husband tease each other, and she slaps him playfully on his backside.

Language: 4 s-words, 2 b-words, a few uses of “hell.” I do not recall any uses of God’s name in vain. Surprisingly there are no f-words.

Violence and unpleasant visuals: Zombies are killed in close proximity, resulting in huge stylized kills with blood splattering and necks broken. Many of these kills are in slow motion, as well. A zombie uses a chainsaw to kill a character, spraying blood everywhere. A large zombie chases characters through a city, killing other zombies and leaving a large path of destruction. Some of the infected have gruesome, toothed tentacles that come out of their mouths. Two large axe-wielding zombies attack and chase characters. A character is eaten by a horde of zombies after falling through ice. There are multiple gun fights that result in characters being shot, sometimes repeatedly, and killed. There is a long fist-fight between multiple characters that results in broken limbs, blood, and some characters dying.

Alcohol and drugs: One character is seen smoking.

Positive
Positive—…definitely different then the first four films. It’s always been my favorite movie franchise, so, of course, I have nothing bad to say about it. The movie is action packed; there’s a lot of amazing fight sequences, which was the best part of the movie. As far as content goes, there was a lot of gore/killing in this movie, the cursing wasn’t as bad as it has been in previous movies, and nudity-wise there was only one offensive scene where Alice is in a white room with white paper covering her front and back, but the sides were open so you can see the side of her breast and buttocks even though she doesn’t have much; the scene was a bit dragged out making it somewhat awkward. There was also cleavage and tight fitting outfits throughout the movie. Overall, I really enjoyed watching this movie and will probably go see it again.
My Ratings: Moral rating: Average / Moviemaking quality: 5

Ashley, age 23 (USA)
Negative
Negative—I have seen all but one of these movies, and I must say this was the worst and the most unbelievable. I was appalled as a female to see as much unnecessary cleavage as they showed, let this be a warming to any man who wants to guard his eyes and heart for God and his wife. There is absolutely no way to look away during all the scenes that showed provocative glimpses of the female form. Also, the evil female Jill, was so fake and unbelievable that it made the movie a total joke.
My Ratings: Moral rating: Extremely Offensive / Moviemaking quality: ½