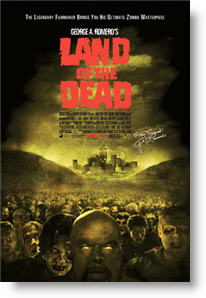 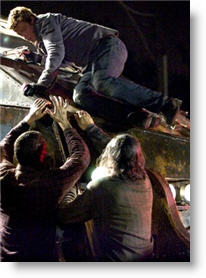 How does viewing violence affect the people? Answer

“The legendary filmmaker brings you his ultimate zombie masterpiece.”

Here’s what the distributor says about their film: “George A. Romero’s Land of the Dead is the director’s return to the horror genre he invented, beginning with the “Night of the Living Dead” and continuing with “Dawn of the Dead” and “Day of the Dead”.

In a modern-day world where the walking dead roam an uninhabited wasteland, the living try to lead “normal” lives behind the walls of a fortified city. A new society has been built by a handful of enterprising, ruthless opportunists, who live in the towers of a skyscraper, high above the hard-scrabble existence on the streets below. But outside the city walls, an army of the dead is evolving. Inside, anarchy is on the rise. With the very survival of the city at stake, a group of hardened mercenaries is called into action to protect the living from an army of the dead.”

Positive—Violence: Extreme / Profanity: Heavy / Sex/nudity: Mild / I loved this movie. I grew up a George Romero fan, and have been a fan since the black and white masterpiece, “Night of the Living Dead”. What can I say?? I’m a sucker for good stage make-up and special effects. Although “Land of the Dead” won’t be my favorite Romero film (I think it’s going to tie with “Dawn of the Dead”) it certainly is better than the remake of DOTD or Resident Evil. Film quality and special effects are top-notch. Ohhhh it’s gory, possibly the goriest film I’ve seen in a long while… however a certain scene will make all of those young people wanting their bellybuttons pierced to think twice about having it done.

The language is rough, and there’s some brief nudity (breasts) inside a club and a very brief make-out scene between two women that ends quickly when they are rushed by zombies. The sexual situations, although brief, upset me a bit because this is not a normal part of a Romero zombie movie. This could be a result of big studio influence since his earlier movies were more low budget.

Bottom line is… If you love scary movies and great make-up AND don’t mind realistic gore and rough language and can get past the very brief but unnecessary sexual situations, then I highly recommend this movie. But for goodness sake LEAVE THE KIDS AT HOME. My children (14 and 17) know all about special effects and have even met a make-up technician from the remake of “Night of the Living Dead”. They can do better monster make-up than most I’ve seen in some B horror movies. However, they will not be attending this movie because of the sexual content. My Ratings: [Offensive/4

Penny Jinright, age 42
Negative—I have been a fan of zombie movies since I was about fourteen. Until “Land Of The Dead” came out, George A. Romero had three such movies under his belt. Previous to “Night Of The Living Dead”, the first of the three to be released, zombies had been incredibly boring monsters that were anything but terrifying. Romero changed that by turning the walking dead into cannibals that seemed to live for nothing else but to eat the flesh of living people. The entire premise of all recently dead corpses coming back to life for reasons unknown and then eating their relatives, friends, and strangers without mercy or pity was perhaps the most terrifying new idea in horror history.

Following this movie came the first sequel, “Dawn Of The Dead”. Although the film is generally about four people attempting to survive in an abandoned shopping mall while the army of zombies around the world grows steadily larger and threatens to wipe mankind out, it also poked fun at humanity’s obsession with materialism by having the zombies trying to get into the mall not because they wish to eat the four people inside, but because the mall was where they spent so much of their time when they were alive.

The second sequel was “Day Of The Dead”. This story of what appeared to be the last remnants of mankind taking shelter in an underground mine was not as good as the first two, but it would have been a decent ending of the zombie plague had Romero chosen to stop here. Unfortunately, Romero chose to make one last movie, and this was without any doubt his absolute worst zombie film.

I had very high hopes that Land Of The Dead would offer some finality to the crisis that had wiped out civilization. Perhaps it would answer the question as to why the dead had come back to life. Maybe a solution would be found to destroy the zombies once and for all. Alas, the film focuses on man’s greed and selfishness even in the face of total annihilation by having some well-to-do types living it up in a high-rise building while their servant-class employees do their bidding by smuggling food and goods passed the zombies. By the end of the film some of the living dead have managed to evolve the ability to think for themselves, which is a terrible characteristic to give to the zombies when this is supposed to be the last movie Romero intended to make in the series. It creates open a whole slew of questions that will be forever unanswered, in addition to the older questions that will also remain unanswered.

Why, for example, are the zombies developing some intelligence now when they had failed to do so in the first three films? Yes, Bub from “Day Of The Dead” was developing some intelligence, but he had to be taught and trained by Dr. Logan. The zombies in “Land of the Dead” are simply getting smarter on their own without any given reason. This is bad enough, but having a story concerning some elites trying to live as they did before the plague started lacks any originality at all. The ending is quite predictable, which is sad when we happen to be talking about a movie that should have been filled with shocks and surprises. There was a certain feeling among “Star Wars” fans that Episode Three would deliver as the final movie in the saga, and it did. Unfortunately, I also had a feeling that “Land Of The Dead” would deliver as the last of Romero’s zombie films. It failed to deliver on any level.

I was so disgusted and disappointed in this movie. Romero started out with a bang and ended with a yawn heard around the world. Pity. I expected so much more from him than this.
My Ratings: Very Offensive / 2