for bloody violence and language. 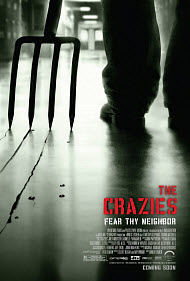 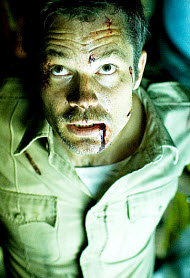 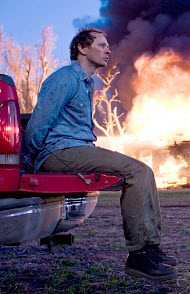 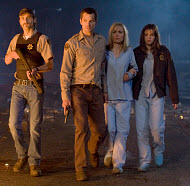 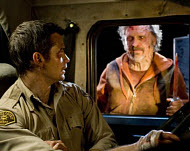 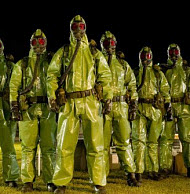 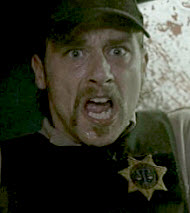 WATER: The Miracle of Nature

This film is a remake of George A. Romero’s “The Crazies” (1973), a low budget movie distributed by Cambist Films.

Ogden Marsh, Iowa is a happy, rural town, enjoying the first game of the high school’s baseball season. All that changes, however, when the former town drunk shows up on the field, shotgun in hand. Trying to reason with the armed civilian is the town’s sheriff David Dutton (Timothy Olyphant). With a cold, passive stare, the local locks eyes with Dutton as he raises his shotgun, but the sheriff is able to fatally shoot the man first.

When the autopsy reveals that there was no alcohol in his blood, and another man nonchalantly burns down his house with his family locked inside, Sheriff Dutton knows more is going on than what meets the eye. An investigation emerges of a possible contamination, but it’s quickly diverted when the military suddenly and forcibly invades the town.

Although the contaminative symptoms results in a zombie-like state, “The Crazies” isn’t one of the latest zombie movies to be released. The true thriller is within the film’s realistic plausibility. Would the government go through almost any length in order to cover up its tracks? Would victims become automatic lab rats and suffer inhumane treatment? The film’s greatest move is that it never stands itself on a soapbox, preaching political theories. Rather the audience only knows the town’s point of view, as they slowly discover the truth themselves.

And lastly, the execution and delivery of the characters is excellent. Yes, Ogden Marsh has a population barely over 1,000, but its citizens aren’t the stereotypical backwoods people with missing teeth. Sheriff Dutton and his deputy do a skillful job, investigating the town’s latest deaths and their connections to the mysterious plane crash. Timothy Olyphant and Radha Mitchell have an impressive chemistry; it was refreshing to see a devoted married couple who apologized after fights and continuously risked their lives for each other.

Despite the film’s high quality markings, “The Crazies” is an offensive film. It has heavy profanity with over 70 uses, including over 30 “f” words, 25 sh*t, and 17 GDs and 5 misuses of Christ’s names.

The violence increases as the film progresses and becomes quite graphic at times. Several people are shot in the chest and head; some are coldheartedly hunted down before being shot. Bodies are torched, and burnt corpses are shown on several occasions. The sheriff gets attacked by a saw. The stabbings are very vivid. In one of the most disturbing scenes, an infected town resident begins to stab helpless victims, who are strapped to gurneys, with a pitchfork. During an attack, Dutton gets his hand stabbed with a knife, impaling it to the floor. The subsequent scenes show him pushing the knife up through his hand and then stabbing his attacker through the neck with the still-impaled knife. The camera lingers as she slowly dies.

When going back to their deserted house, Judy Dutton rushes to put away the laundry, desperately trying to grab any normalcy. As her husband comforts her, she states how it’s a beautiful morning and how their lives have drastically changed. The movie’s timeline happens all within just two days, more than enough time to demonstrate just how frail life is. In Proverbs 27:1, King Solomon wrote: “Do not boast about tomorrow for you do not know what a day may bring forth.”

Due to the offensive content, I do not recommend the film. “The Crazies” is a well-made movie that could leave viewers heavily pensive on how the world is ever changing, frail, and fleeting. While humans know this, we still tend to put infallible faith in the temporary. In Mark 13, Jesus states that heaven and Earth will pass away, but never his words. There’s an everlasting comfort in knowing that our Savior is the same now and forever.

Hebrews 13:8: “Jesus Christ. is the same yesterday and today and forever.”

Comments below:
Comments from young people
Negative—“The Crazies” is a story of a small town in Iowa Ogden Marsh that is plagued with some sort of infection type thing that makes the inhabitants go well you know go crazy. (It’s in the water) I know I’m too young to be watching a film with so much violence and very offensive language, but my friends wanted to watch it. I’m a Christian, and I should have said “no,” but I fell for Satan’s trap. This movie is too violent for a Christian audience and should only be viewed by the critics.

What I saw scared me and has filled my mind with violence and has made my heart hurt almost literally. In Luke 11:34 it says, “Your eye is a lamp that provides light for your body. When your eye is good, your whole body is filled with light. But when it is bad your body is filled with darkness.” So I do not recommend this to any one that loves the Lord stay away from it; I wish I did.
My Ratings: Moral rating: Very Offensive / Moviemaking quality: 2½

Anonymous, age 16 (USA)
Neutral—I saw this movie expecting to see violence obviously. When I saw the trailer, and knew this was gonna be a pretty brutal experience. First of all, I thought this was gonna be a zombie flick. It isn’t, apparently the sickness everyone gets infected with is being crazy. Or how the movie portrays it, being completely sadistic and heartless and brutal as possible. It is very violent through out the movie, but keeps you in suspense. I thought the movie was pretty good, than expected. Filled with suspense and tensing moments, very brutal scenes, keeps you at the edge of your seat horror movie. Pretty well made.

In a christian perspective, this film is not necessarily a Christian film, LOL. It’s violent, bloody, and just plain creepy. But let’s be real. The entertainment in this country wasn’t necessarily made just for christians. But this isn’t something to take a kid too. In conclusion, this movie was pretty well made. If you enjoy watching suspenseful zombie like horror movies, then you’ll have a blast.
My Ratings: Moral rating: Average / Moviemaking quality: 4

Joshua, age 17 (USA)
Positive—I was really excited to see this movie, because I love thrillers and zombies and such, and I was surprised that my mom allowed me to watch it. I was a little disappointed, because there weren’t enough scary parts and definitely not enough blood, but it was good. I liked this movie but I don’t love it; there wasn’t enough blood like I said. I don’t care for cuss words they are just words and don’t give a damn what people say about that because its my right but anyway I liked the movie and the make-up was nicely done. My mom even screamed which is usual.
My Ratings: Moral rating: Good / Moviemaking quality: 4½

Isabel, age 14 (USA)
Positive—First of all I would like to say if you cant handle violence, please dont come on here whining about seeing this. Your fault. Its rated R for BLOODY VIOLENCE. This is a movie about sticking together and giving someone the benefit of the doubt. The main character risks his life on several occasions for others, as does his partner. If youve seen any zombie movies, you can pretty much say youve seen The Crazies, too.

The filmmaking quality is a little better than average horror, and the violence is somewhat restrained in my opinon. Much of it could have been so much more prolonged, graphic, twisted and brutal. The graphic deaths were generally pretty quick. There is no sexual content to speak of, and not too much bad language, either. Maybe 15 F-Bombs. I say if you have nothing else to do and want to see a good suspenseful movie, and wont be too offended by the content, then watch it. If you enjoy horror, you will enjoy The Crazies.
My Ratings: Moral rating: Offensive / Moviemaking quality: 3½

Rob, age 15 (USA)
Movie Critics
…The film is a real armrest grabber, it moves with good pacing and builds its paranoid tension successfully, but it’s more gruesome than eerie, more depressing than scary. …

Phil Boatwright, Preview Family Movie and TV Review
…there’s enough toxic language here to burn the ears off anyone crazy enough to go sit through it… The filmmakers' message about chemicals and the environment, then, is anything but subtle. In fact, they’d like to sign you up for social action as you leave the theater. …

Bob Hoose, PluggedIn
…This spirited yet faithful George Romero remake has the makings of a certified hit. …

Michael Rechtshaffen, The Hollywood Reporter
…a perfectly competent genre film in a genre that has exhausted its interest for me, the Zombie Film. …

Roger Ebert, Chicago Sun-Times
…Here’s what I can say for sure about the humanoid attackers in the new version of The Crazies: They’re not very interesting. …

Claudia Puig, USA Today
…a terrific little B-movie in which the deaths of characters carry a real sting, the gore is used sparingly but to disturbing effect and the editing has been paced at a speed that allows you to follow the action transpiring onscreen…

Rene Rodriguez, The Miami Herald
Comments from non-viewers
Neutral—I’m sorry but it really bothers me how people who KNOW a movie is rated R for nudity, violence or whatever other matter is involved, go pay and sit in a theater for this movie, then they talk about how bad it is and how Christians shouldn’t see the content… DO NOT GO SEE IT. I haven’t seen it. I would like to, yes… If I go knowing its rated R, I will not trash the movie. If I see it, I will comment on the quality of the movie, storyline, actors, etc …please people, seriously, don’t go all holy holy on a movie that YOU CHOSE to see… I am just being real…