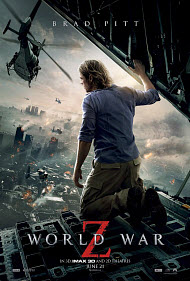 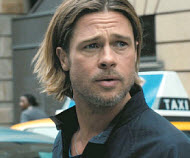 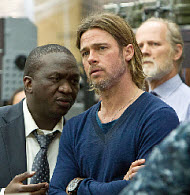 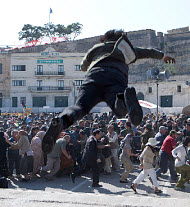 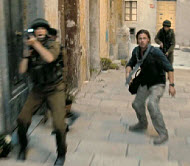 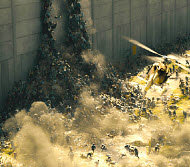 plagues in the Bible

It’s been a long time since an action movie has held me in suspense. I am usually quite analytical, but WWZ kept me interested. Brad Pitt plays his part rather well, and the film remains rather bloodless. Whether or not, you’d like this movie depends on if you’re a fan of zombie movies.

Gerry Lane (Brad Pitt) is a former United Nations worker who is summoned back to duty to help the government research a zombie pandemic that is shutting down the world’s countries. That is about all there is to the plot, any more might reveal spoilers.

There is a galore of CGI effects and shaky camera chases. This might bother some, but I’m unsure how else they would have shown thousands of zombies running amok, ruthlessly attacking a city, and piling over themselves to climb up a wall. The harsh jerks of the camera help keep the film at a PG-13 rating, since hardly any blood is shown and several direct impacts of violence occur off screen.

I saw the film with a friend who’s a huge fan of zombie movies, and she said that the lack of blood and gore takes away from the authenticity. On the other side of the spectrum, I usually prefer to avoid movies with heavy amounts of violence and felt the movie did well in this aspect.

Though mostly bloodless, there is plenty of violence, so this movie should definitely not be seen by younger children. Zombies invade by the thousands, tackling people down and biting their victims” arms and necks. This happens in several scenes throughout the movie. Some up-close shots are shown of the bitten people painfully contorting while they contract the mysterious virus. Zombies go through windshields and are shot and bombed by the military.

Some of the infected people commit suicide before the illness takes over. One shoots himself in the head (off screen), and another detonates a grenade after he is bitten on the neck. To save a life, Gerry quickly cuts off a woman’s hand after she is bitten. This happens very quickly. A man accidentally falls on a gun and shoots himself. A police officer gets hit by a truck. Gerry gets impaled with metal; the wound is shown protruding from his back.

The cursing is quite heavy, with about 21 uses: 5 GDs, 5 sh_t, 4 b_stard, 3 b_tch, 3 as_, and at least one use of b_tch. I would say that several of these were said in anticlimactic scenes and made them feel unnecessary.

The characters are a bit one dimensional, but I enjoyed the fact of how Gerry calls his family daily and has a loving relationship with his wife. I would say my favorite part of the film is how they unquestionably adopt an orphan into their family.

Still, there are some quirks. Those looking for a deep movie will likely dislike WWZ. There are some huge plot holes and some “Duh” moments. The social commentary is quite vague and underdeveloped. There were some inquiry into Jerusalem’s past, but this was quickly overshadowed by more zombies. The plot is quite thin and sometimes cringe-inducing. From so-called experts riding squeaky bicycles in the complete darkness to people making careless noises by simply not looking on what they’re stepping on.

The movie changes tone several times and slows down in others. This made some quite tense scenes with a good amount of scares. This also helped stop the movie from becoming a loud, brainless drivel. If you like zombie movies with little social commentary, then you might like “World War Z.” However, I don’t personally recommend the film.

Positive
Positive—My wife and I were hesitant to see this film, because “zombie” movies tend to focus on blood and gore, but after hearing a friend talk about the film we decided to give it a chance. Although there is a lot of violence, there is very little blood and gore. As far as action and suspense, this is a real edge-of-your-seat thriller from start to finish. Yes, there are some holes in the plot, but the story moves along so fast you hardly have time to notice.

Brad Pitt’s character has a loving and nurturing relationship with his wife and children, and it’s ultimately his love for them that forces him to embark on a dangerous mission. At no point in the film does he waver in his commitment to his family. Overall, we enjoyed the movie. It was non stop action and suspense, and even had a little humor in the most unlikely of places.

The ride home from the theater consisted of recounting the numerous scenes that made our hearts beat faster or caused us to cringe in anticipation, which is what a well done movies does. It is a violent film with a very dark subject matter, so I would hesitate to take a child who isn’t mature enough to be able to have a meaningful discussion about the film after seeing it.
My Ratings: Moral rating: Average / Moviemaking quality: 4

As a ride, its pretty good. As a movie to ponder over after you see it; well, if you get a pizza afterward you will probably ponder the pizza longer.
My Ratings: Moral rating: Average / Moviemaking quality: 3½

Bob, age 52 (USA)
Positive—First, let me start by saying that if you are against “zombies”… that is what it is about. (Perhaps choose a different film to go see.) This movie was my husband’s pick. I wasn’t really sure I was going to be impressed by a zombie movie… however, the “zombies” are really a plague that is attacking the planet. The theory of a world plague is possible, although this one was very dramatic. I can say the movie kept me squeezing my husband’s hand throughout.

The way the story is told, you are definitely “on the ride” with the main character. As the movie progressed, I kept wondering how they were going to end this movie? Without posing any spoilers, I was very impressed with the creativity of the writers on the movie’s conclusion. See all »
As for Biblical implications of this movie—I looked at it this way: It isn’t really about “brain eating zombies,” it is about a plague. There are real life examples on Planet Earth. Apparently, there is a fungus that can infect ants that will cause them to go back to their colony and infect the others. However, the other ants will carry off this infected ant before the spores mature, to protect the colony. Kind of a “zombie ant”.

This movie DOES have a plot. The main character is always learning throughout the movie. You are putting the pieces together with him throughout. The violence is not as graphic as many movies out there. There are no inappropriate scenes or inappropriately dressed people. (not many movies out there like this anymore) It keep me engaged and interested throughout the entire movie. The meek shall inherit the Earth.

Tracy, age 44 (USA)
Positive—“World War Z” isn’t really a zombie movie. It has zombies in it, but it isn’t as honest as most zombie films are. This is a movie about faith—faith that the world has meaning, faith in family, faith in science, faith in the inherent good in humanity, faith in a mechanistic universe. Not too many of these things are Biblical.

Zombie movies usually say that faith in anything is stupid—and they are right, if there is not God. If there is, faith in science, as presented in this movie, is stupid. It’s entertaining, but not honest. …
My Ratings: Moral rating: Average / Moviemaking quality: 4

Trent Dejong, age 51 (Canada)
Positive—“World War Z” is best seen on DVD with the subtitle channel switched on for the first viewing. This is to allow the viewer to keep track of what is a fast paced movie. The film narrative itself begins with the opening credits. According to one scene Gerald Lane’s (Brad Pitt) philosophy is “Movement is Life” and staying put leaves you a sitting duck.

This is an adults film as demonstrated by its UK 15 certification. The standout scene appears to arrive towards the end when family man Gerald Lane walks unharmed past a crowd of zombies running past him. This scene appears to represent, at least to myself, a reference to the Gospel of Luke ch4 v30. This is the part of the film, towards the end, which also features Pierfrancesco Favino, better known to the Chronicles of Narnia fans as General Glozelle.

The beginning and end of this film seems to hint at some kind of future danger to a complacent human race.
My Ratings: Moral rating: Better than Average / Moviemaking quality: 4

Christopher, age 55 (United Kingdom)
Neutral
Neutral—The concept of zombies, of itself, is ridiculous (in animals virus can change its host behavior, but not make dead walking). So I thought that after all zombie movies done till today, this one will be more original and have more science to it. Unfortunately, it was worst than “I’m Legend,” and with a bit more disgust.

The theory of evolution, being just a wild and failed speculation, at least provides a great foundation for imagination (movies). So I don’t understand why “WWZ” couldn’t employ this tool? Interesting CGIs. No blood. No piercing ears use of bad language. No interesting plot. Will forget about the movie in few months. P.S.: I paid for “Monsters University,” but went on this one, so not to contribute my $$ to it.
My Ratings: Moral rating: Average / Moviemaking quality: 4