for extended sequences of violence and action, some thematic elements, substance use and language. 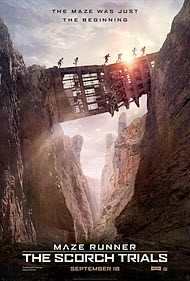 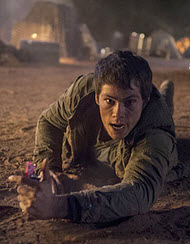 attempting to cure a pandemic 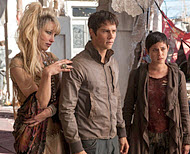 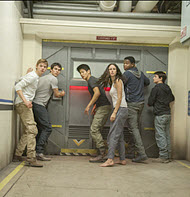 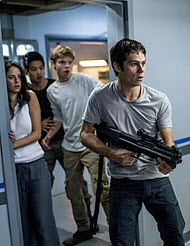 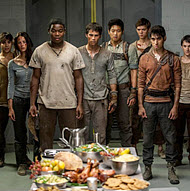 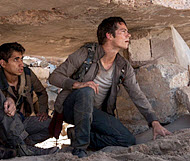 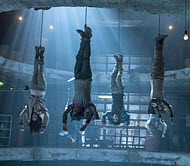 “The Scorch Trails” starts up right where we left off it the first film “The Maze Runner.” Thomas (Dylan O'Brien) and his fellow teammates are taken to a safe bunker where they are given shelter, food and an escape from the Maze. They learn that they were not in the only Maze, and there are many other similar survivors. They trade stories and speak of hope of a safe haven, where those who are in charge of the bunker promise to take them, a few at a time.

Almost immediately, Thomas has an unsettling feeling about his new surroundings. He soon finds confirmation of a possible rebellion and decides to inform his friends, and they devise an escape. They escape into the Scorch, a post-apocalyptic wasteland, where a zombie-style illness is widespread, and the infected roam the land. Thomas and his crew journey to find the rebellion… and answers.

This is a tension-filled intro to the sequel. Let’s start with the acting. Thomas (Dylan O'Brien) and Ki Hong Lee are stand outs in a well constructed cast. I have not read the books, but the story is truly eye-catching and told very well, and it’s easy to follow and understand, if you watched the first film. The cinematography is appealing and believable.

As for a biblical perspective, there is a lot about standing up against a tyrannical establishment. Plus, a resounding theme of hope. In these uncertain times, we must remember where our hope lives. Jesus is our hope, as Romans 12:12 says,

Rejoice in hope, be patient in tribulation, be constant in prayer, reminds us of this.

I personally liked the sequel, minus the swearing and other objectionables, I mentioned above. This film served as a a great sequel and good prequel to the next film “Death Cure.”

Comments below:
Positive
Positive—This movie is VERY intense; several of my friends were freaking out and looking away, due to the violence. My friend said that this movie is the scariest movie he’d seen, second only to “Rage” .
My Ratings: Moral rating: Very Offensive / Moviemaking quality: 4½

Mike, age 23 (USA)
Neutral
Neutral—I feel that in order for people to make a decision to watch this movie, they may need to be aware of something which could potentially be spoilerish, I ask that if you do not wish to read the spoilers, please skip to the third paragraph. This is essentially a zombie movie. The movie contains horribly disfigured zombie-like people who usually pop out of the shadows, and done in such a way to produce jump scares. Because of this, I would highly recommend parents review the movie before letting their kids see it.

With that in mind the movie was fairly okay. The language was present, but far and few in between. There is one suicide scene, I should add, but the actual death occurs offscreen. The violence, of course, is heavy in the movie. I definitely liked and preferred the first movie better.

As I mentioned before in the second paragraph, I recommend parents review the movie first before letting kids see it, as it does contain gruesome images and jump scares.
My Ratings: Moral rating: Average / Moviemaking quality: 5

Veryan, age 26 (Canada)
Negative
Negative—I was pleasantly surprised by the first offering of MAZE RUNNER, but this one bored me to tears. The writing, dialog and acting are… awful. The special effects are okay, but it’s one of those movies where the implausible becomes a distraction. ***SPOILER*** I’ll admit I was a little curious after the ending of the first, to see where they would take the story. (I’m not a follower of the book series.) Essentially, the writers got lazy and made this an escape from simply a bigger maze of sorts… with zombies. That’s right. It turns into a zombie movie—and an especially cheesy one at that. I just rolled my eyes… no that’s not quite right… I closed them. You know a movie really isn’t worth the theater price when you doze off for 5 minutes, in the middle of a zombie sequence, no less, and when you wake up you realize you haven’t missed any part of the story or drama.

Yes, they talk about Evolution. …yes, there is a lot more sexual and drug overtones, but it is treated disdainfully. The biggest offense for Christian audiences (in my humble opinion) isn’t the subject matter or profanity, it’s the complete lack of intellectual or psychological stimulation.
My Ratings: Moral rating: Average / Moviemaking quality: 2½

JB, age 54 (USA)
Negative—This movie was quite violent. My 14 year old son, who had seen it already, had warned that his siblings could not watch it. How right he was. Blackened, empty eye sockets (people had gouged their eyes out, but that was not shown), zombie like people, who in some instances become entangled with some plant life growing in and through them, a great deal of shootings happening.

I preferred the story line of the first movie and the suspense, and there was less human violence. I felt disappointed to think, this is “YA” entertainment, Young Adult movie based on a Young Adult series of books. Problem is, it’s not 20 somethings watching this, it’s teens. The book is sold at book fairs in middle schools, and the movie is a draw for these kids.

One character seemed to really like the S-word, as she said it often enough. Then there is the scene where they have to drink something before they can enter. Once they did I thought, ooooh, where are they going with this. Fortunately, clothes stayed on, but it certainly presented itself as an establishment of ill repute. All in all, I was not impressed, but disappointed. Give me the humor and family friendliness of “Goosebumps.”

Can we just keep our young teens innocent a while longer? Can we not have them exposed to such violence in film, books and games? I’m not an old fuddy duddy, but enough with the violence.
My Ratings: Moral rating: Offensive / Moviemaking quality: 4

Andrea, age 43 (USA)
Negative—The overall theme of the movie is good triumphs over evil, but this story is filled with really demonic undertones… the characters who are infected are like “zombies” (possessed) trying to attack and bite the living, instilling fear in the other characters as well as the audience (2 Timothy 2:7)… The place where they are looking for “Mark,” Thomas is told to “drink this” or be denied entrance.

You knew it was some kind of drug, mind altering substance… and, sure enough, after he is coerced into drinking it, his mind gets “woozy” and the place they went in to was filled will images that no follower or Christ would want to subject themselves to. (Ephesians 5:11) (Myself, being saved by God from a life of drugs, alcohol, and sex… I was very uncomfortable with those scenes in particular)… although no sex was SEEN, it was definitely implied by the atmosphere… See all »

Those were the most offensive scenes to me but there were a lot more scenes of violence in order to survive. And even a suicide to avoid the effects of being “bitten”. All that being said, the world our children are growing up in is becoming more and more violent, and they are surrounded by images God would never want them to dwell on, yet they are still surrounded by them. They managed a decent portrayal of overcoming what it looks like around you and striving to do what is right… although the film never does give credit to God… so we as believers need to recognize God in it, and relate it to our own walk to overcome what we are surrounded by. (Romans 12:21)

If you or your kids must see this movie, then I would caution parents to view the movie with their kids depending on their maturity, in order to discuss topics as they arise… or if not viewed together, then separately… but make sure to discuss it with them so they know how God rules over all of it. (Proverbs 22:6) Just picture Jesus sitting in the audience with you. (He probably wouldn’t stay for any of the movies we watch though.). My two cents…
My Ratings: Moral rating: Offensive / Moviemaking quality:

a Mom, age 51 (USA)
Movie Critics
…“The Scorch Trials” adds nothing new to the unkillable dystopian genre, but it’s at least less ponderous than its predecessor. The many chases and ludicrous narrow escapes offer respectable doses of adrenaline. …

Andrew Barker, Variety
…They keep on running, but are they getting anywhere?… lacks a similar sense of originality and urgency, undercut by overly familiar characterizations and dilatory pacing. …

Justin Lowe, The Hollywood Reporter
…a YA franchise runs out of steam… a worryingly tedious follow-up… [1/5]

Peter Bradshaw, The Guardian (UK)
…Whether you should go now to the sequel to 2014’s “The Maze Runner” may depend on familiarity with the first two books in the James Dashner series or tolerance for playing catch-up in the dark. As is the film fashion these days, sequels based on young adult novels presume moviegoers are not coming in cold and also are willing to wait for the third (or, in other cases, fourth) movie to bring an end to the story. …

Barbara Vancheri, Pittsburgh Post-Gazette
…This one runs for 138 minutes, and so do its protagonists. …“I’m tired of running,” Thomas says at the two-hour mark, and I felt for him. And later: “What do we do now?” I’ll answer that one: We wait… for part three.