for brief strong language, some sexual content and a scene of drug use. 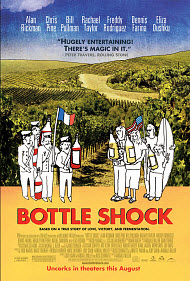 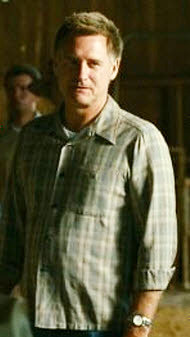 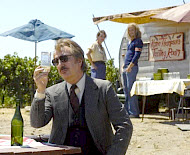 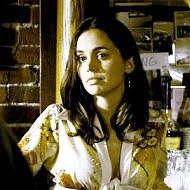 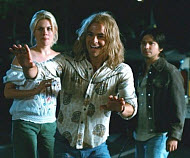 Wine in the Bible

“The French never knew what hit them.”

I’m not going to lie: “Bottle Shock” bored me. Maybe I went in to it expecting too much. Maybe I went in hoping for more of what the movie’s trailer hinted at. Either way, I was disappointed.

“Bottle Shock” is the David vs. Goliath of the wine world. It tells the “true story” of Chateau Montelena, a vineyard in California’s Napa Valley owned by Jim Barrett (Bill Pullman). The vineyard is struggling, and the wines being produced don’t seem up to Barrett’s standards. Money is tight, and nobody seems to be buying what he is trying to sell. His son Bo (Chris Pine) isn’t much help to his father; he spends most of his days surfing, getting high, or hanging out with the ladies. His nonchalance drives his father crazy, and they often go out back to the make-shift boxing ring and go at each other.

In Paris, Stephen Spurrier (Alan Rickman), an owner of a wine store called “The Academy of Wine,” is also seeing business struggle. His only customer is his business neighbor Maurice (Dennis Farina) who apparently is experiencing a lull in action, too, because he is constantly in Spurrier’s store sampling wines and giving out advice. The local wine community doesn’t accept Spurrier, possibly because he is British, so he decides to do something about it. He has heard of the upstart wineries in California trying to make names for themselves, so he heads to America to taste and see if the wine has any reason to be made in the first place. When he realizes that the people in America may be on to something, he heads back to Paris to set up a blind tasting by some of the elite French wine experts to see which wine reigns supreme.

I like the set up of the film—taking an idea commonly found in sports films (underdog versus huge favorite) and applying it to something far less ordinary. Let me rephrase that—I like the way I thought the film would be set up. Frankly, the movie isn’t enough about the competition between the wine makers, or about Californians gearing up for it. Far too much time is spent on side stories and relationships that are not all that interesting, or in most cases, even believable. The Bo character is annoying, at least to me, and not the least bit endearing. His relationship with Sam (Rachael Taylor) develops somehow, despite her not being interested in him seemingly—and having a relationship with his best friend Gustavo (Freddy Rodriguez). But, that’s besides the point, because stories like this always have to end with the main characters getting together, no matter how much we don’t buy it.

The content of “Bottle Shock” will offend some also. There is one sex scene, and Rachael is rarely seen in clothing that is not in some way revealing (bras not being worn in the 70’s). She also spends one scene washing a big machine outside, in very little clothing, which of course is soaked, and all the men working the vineyard take their lunch breaks to ogle her, including Bo. Language is surprisingly heavy, with a few uses of the F-word, and various others, including a few strong uses of the Lord’s name in vain. Plus, there is the whole “alcohol” topic, which I won’t really get in to here, because most Christians already know which side of that debate they stand. I will say though, that for a movie about alcohol, only one character is seen drunk, and it is when everything seems to have hit rock bottom. This is not a movie for children, but they likely won’t even know they missed it.

A few of the performances are enjoyable, including Alan Rickman and Dennis Farina. They have a good chemistry that brings smiles, the times they are together. It is nice to see Bill Pullman back on screen, even if it is for a pretty straight-forward character. But, the movie never engaged me. I got the same feeling watching this movie as I got watching the recent “X-Files” movie—restlessness. I wanted to get up and leave. Not because I hated the movie, but because I could think of much better things to be doing with my time. Hopefully, Christians considering to see the film will take this advice, and do something else with their valuable free time.

Movie Critics
…The filmmakers play loosey-goosey with a remarkable true story to deliver a movie with tired elements from the B-movie playbook. …

Doris Toumarkine, Film Journal International
…fails to deliver much in the way of entertainment… Bottle Shock has a case of the no-budget blues…

Steven Rea, Philadelphia Inquirer
…a charming fictionalized version of the victory, ‘based,’ as they love to say, ‘on a true story.’ Shot in California like ‘Sideways’ but set much closer to the Earth… director milks great entertainment, if not actual suspense, out of the competition…[3½/4]

Roger Ebert, Chicago Sun-Times
‘Bottle Shock’ uncorks a good story of California wine… It’s the kind of feel-good movie whose resolution is evident from the start, being based as it is on a true story. But that doesn’t make the journey any less interesting. …[3/4]