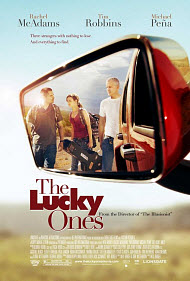 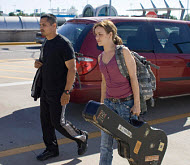 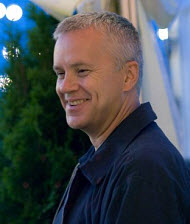 “Three stranges with nothing to lose. And everything to find.”

After being granted a thirty-day leave, three Army soldiers are all on a flight and randomly begin to speak. They all have different agendas and ways they wish to spend their thirty days before they have to return. Upon landing in New York, they find out that a recent blackout has canceled all flights. They decide to rent a van together and go on a cross-country trip. Along the way, they develop friendships and learn more about themselves.

Cheever (Tim Robbins) is the oldest of the trio. He takes on a somewhat fatherly figure. After faithfully serving his country and receiving a back injury, he is looking forward to going home to his wife and son. T.K. (Michael Peña) is a seemingly upfront, tough guy who’s engaged and going to Las Vegas for an undisclosed reason. Lonely and with no family, Colee (Rachel Adams) only has her dead boyfriend’s guitar. She uses this guitar as her only connection to a family she does not even know. She imagines his family welcoming her into their home when she returns the guitar.

When it comes to plot, the movie offers nothing new. This film is yet another Iraqi war movie to come out this year. On their road trip, the trio encounters clichéd “unique” people and adventures. Throughout their road adventure, they all grow into stronger individuals despite their struggles.

What makes this film truly superior is the extraordinary performances of the trio. The film’s success relies heavily on Robbins, Adams, and Peña. They all bring emotional depth to their characters, helping the audience relate to them and cheer them on.

Although these soldiers are returning from Iraq, this is not an antiwar film or politically motivated. I believe the film wanted to show more of the effects of being away from home so long. Wherever they went, they were always thanked for their service or asked ignorant questions. Some people were fascinated by the war and wanted to know details, when all the soldiers wanted to do was to go home.

The ‘R’ rated is thoroughly deserved. The cursing in the film is quite heavy. In all, I counted 50 profanities, including 21 ‘f’ words and 17 sh*t. While I do not recall hearing any GD, the Lord’s name is said in vain at least 6 times.

The sexual content is also heavy. Later in the film, T.K finally admits the real reason while he is going to Las Vegas. Being injured in his groin area, he is visiting Las Vegas to sleep with a prostitute. Since they have many sexual skills, he is hoping that they will be able to get him to physically respond. Since he has a fiancée, he is hoping that this visit will help solve his sexual problems before he visits his fiancée. After T.K.’s confession, a frank conversation begins of the different alternatives T.K. has. Threesomes and sexual toys are explained as options if he really loves his fiancée.

While they have a picnic and camp out, Colee meets a group of prostitutes who sympathize with T.K’s story. While he does go in the RV with one of them, he immediately leaves. When he and Colee are stuck in the middle of a tornado, he physically reacts to her, and she becomes happy for him. They never sleep together.

After the devastation of his wife wanting a divorce, Cheever gets hit-on by a promiscuous woman. When Colee and T.K settle in for the night, they hear loud sexual noises coming from the next bedroom. While no nudity is shown, the noise, phrases, and positioning leave nothing to the imagination. When her husband walks in on her and Cheever, he encourages Cheever to continue while he, himself, undresses.

When they are at an auto shop, Colee curiously studies postings of half naked women. Colee also has a temper. When T.K insults her dead boyfriend, she quickly begins cursing at him and punching him. After she is ridiculed and insulted at a bar, Colee attacks the girl laughing at her.

Their growth into stronger people is believable. They never do become perfect or have their lives’ loose strings neatly tied together. In the beginning of the film, they would bicker and sometimes condemn one another. As the film progressed, their bond strengthens. It helped show how true friends can help you become a better, stronger person. Colee had no friends, but by the end she had two, true friends. People often believe that the number of friends determines success. King Solomon wrote in Proverbs—“a man of many companions may come to ruin, but there is a friend who sticks closer than a brother.”

While friends are blessings to have, they fail in comparison to the true, everlasting friend. Even though Jesus is our Lord, Savior, and King, He has even called his followers his friends. In the gospel of John, Jesus wrote “greater love has no one than this, that he lay down his life for his friends.” Jesus backed up what he said when He died for the whole world. He is the ultimate friend.

I did enjoy this movie. The script and acting are strong, as are the themes. However, I cannot recommend this movie. The bottom line is that the sexual offenses and the cursing will offend the Holy Spirit. They are in complete opposition to God and His commandments. We must remember what Paul wrote…