for strong violent/gruesome accidents, and some language. 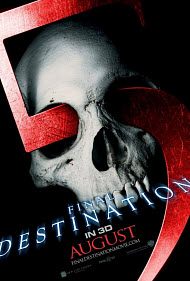 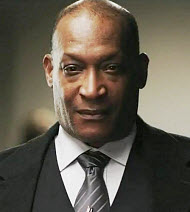 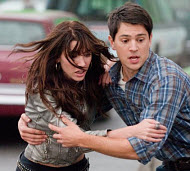 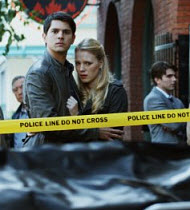 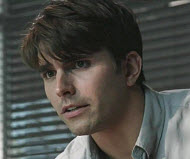 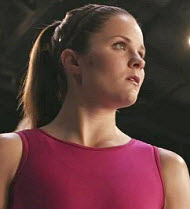 “You all just be careful now.”

These words actually end the movie, being uttered by Bludworth (Tony Todd) the tall, dark and ominous Coroner seen and heard in most of the “Final Destination” movies. Yeah right—like that’s going to help anyone survive that dreaded entity—Death!

In this next, but not likely the last, installment, the newest disaster scene starts out on a bus driving a load of Prefab Paper Company co-workers to a retreat. Our visionary this time is Sam (Nicholas D’Agosto), who learns early on that his girlfriend and co-worker, Molly (Emma Bell), wants to break up with him. The “lucky” survivors this time following Sam’s vision are his immediate supervisor, Peter (Miles Fisher), higher up boss, Dennis (David Koechner—“Anchorman: The Legend of Ron Burgundy,” “Get Smart”), co-workers Candice who is Peter’s girlfriend (Ellen Wroe), Olivia (Jacqueline MacInnes Wood), Isaac (P. J. Byrne—“Horrible Bosses,” “Dinner for Schmucks”), and Nathan (Arlen Escarpeta).

The scene is set on a bridge that has construction going on. As the bus full of Prefab workers is crossing the bridge, along with other traffic, the bridge begins to crack and proceed to fall apart killing people in a variety of ways. This includes bodies being speared and split apart in several pieces, heads crushed, limbs smashed, etc. All of this played out with the extra intensity of 3D thrown in to give us that extra rush of “being right in the middle of the action.”

We are also treated to the customary portion of a song that plays during our main character’s vision. This time it is “Dust in the Wind, All We Are is Dust in the Wind.” This would seem quite fitting to a Christian, since Genesis 2:7 states, “and the Lord God formed man of the dust of the ground…” It’s always awesome that God works His way into our lives, even through movies like this one that do not seem to have any true merit.

After the crash, Sam is questioned by Agent Block (Courtney B. Vance“FlashForward” and “The Closer” TV series) as to how he knew of the impending bridge collapse. Sam is unable to explain, but Agent Block believes “there is an answer for everything.” Agent Block is not so sure that Sam is as innocent as he portrays, and tries to unravel the mystery surrounding the bus catastrophe and deaths that start to occur thereafter.

Thus begins the one-by-one intricate deaths of those that escaped their meant-to-be death on the bus. One in particular scene involving Isaac is especially drawn out. We are “treated” to his death at a massage parlor, where he has arrived with a gift certificate for services that he stole from one of his dead co-worker’s desks. Part of his treatment includes acupuncture, with close-ups of the insertion of needles being shown. As he relaxes with many needles sticking out of him, the usual set-up of the death scene has him falling off of the table, with the needles being impaled completely inside him. If that were not enough, he slowly and excruciatingly pulls one out to further gross us out.

There is a variance in the story line in Final 5, compared to the previous movies. When Bludworth shows up in one scene declaring that if someone else dies in one of the survivor’s places, the books are balanced. This is a new twist and leads Peter, who is devastated by the death of Candice, to try and replace his impending death by killing someone and taking their years left on Earth. Personally, I believe that as this series goes on, it keeps trying to dig up more ways to show us the depravity of man—how much lower can it go?

There are the usual mentions of “luck”, “premonitions”, “hunches”, and “visions.” Candice even keeps a couple of rubber bands on her wrists that she stretches for good luck. Of course, right before her gruesome death, one of the bands breaks, which should have been her clue, right?

All five of the “Final Destination” movies are absolutely not for children, including young teens. There is continual bad language, including several f-words, s**t, a**h**e, pissed, and holy cr*p, although there is less in this movie compared to previous ones. Surprisingly, there are no sex scene or bare parts shown, other than cleavage and butts wiggling. There are many instances of crude language and suggestive ideas from one character in particular—Isaac when he visits the massage parlor.

There is blood, gore, and violence galore. Even at the end of the movie while the credits roll, there are gory death scenes shown from the prior “Final Destination” movies, to further make use of the 3D. If enough of this is watched, senses definitely become immune to the brutality and constant blood spatter displayed.

One of the big plusses, and what keeps a large amount of audience (myself included) returning to “Final…,” is the detail put into the disaster scenes, as well as the intricate death scene scenarios that play out. There’s just something absolutely horrifying about being on a bridge that is collapsing. What would you do? What could you do if this was happening to you? If death were looking you right in the eye, how would you respond? The Bible says in Psalm 23, “Yea, though I walk through the valley of the shadow of death, I will fear no evil. For You are with me.” For those that have Jesus in their lives as their Savior, He is with them in those final moments to carry them on to the next big scene. There is no fear.

Another aspect brought out in the film is when the character Peter is trying to justify killing someone to take his place with death. He talks about how he tried to push someone in front of a bus, but could not, because they did not deserve to die. This brings up an interesting point—who deserves to die and who is in charge of that decision? Again, the Bible states in Romans “for all have sinned and fall short of the glory of God” (3:23), and “for the wages of sin is death, but the gift of God is eternal life in Christ Jesus our Lord” (6:23). I suppose that knowing these things, it does not bother me to see a movie about our “final destination.” I know where my final destination lies.

Finally, I would just like to say that, with a little more thought and creativity, maybe a bit more could be added to the story other than the same continued “disaster, death saves, death kills”, blah, blah, blah. And would someone please tell me the significance of the number 180?

Films in this series

Comments from non-viewers
Neutral—I agree with this reviewer’s views completely, having seen all the other movies in this series. The first three were good, though all had too many characters die (the second in particular, with some of the most gruesome deaths). The detail in the premonitions is indeed what’s SO amazingly compelling about these films; not just the physical detail, but the build-up, the symmetry, the music.

No matter how much the rest of the film might plummet into even ridiculous shallow debauchery, the initial premonition and its aftermath is almost always a hallmark in filmmaking, promising the potential for something deeper than what sometimes happens. I knew the film would, most likely in a positive light, present the moral question of taking another’s life in this film, and it looks like it won’t disappoint; this is both a great plot element and a wonderful moral lesson/question.

And to answer this reviewer’s question, the number 180 was the flight number of the plane that went down in the VERY first “Final Destination” film. The premonition of the flight’s crash was the very first such premonition, leading to the first struggle against death, in the series.

Jennifer, age 26 (USA)
Negative—I would think that after 4 previous Final Destinations… is a review of the 5th even necessary? Gross!!!
My Ratings: Moral rating: / Moviemaking quality: