for some intense sequences of violence and disturbing images, sexual content and brief strong language. 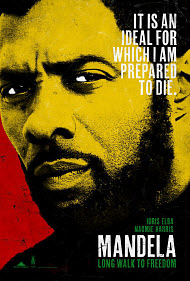 Is the film’s depiction of Nelson Mandela and the ANC accurate?

Reviews of other films about Apartheid

If cinema is truly a universal language than director Justin Chadwick and writer William Nicholson, in their biographical epic “Mandela: Long Walk to Freedom”, are trying to show Nelson Mandela was more than a hero, he was a man, a man that spoke in a language that everyone could understand. Beyond the myth, beyond the legend, they are going beyond broad strokes and painting a picture of a man with faults, flaws and even failures.

“Long Walk to Freedom” is the biopic tale of Nelson Mandela’s life journey from his childhood to his ascension to the presidency of South Africa. The movie is based on the Mandela autobiography, and, from what I’ve read, follows the book pretty faithfully.

As most biopics go, the story is told in a linear fashion following the trajectory of Mandela’s life, and, like a historic time line, hits the key points of his life and moves forward from one historic event to another. It starts briefly with his childhood, his years as a lawyer, then moves chronologically to the events leading up to his arrest, his 27 years in prison, and his election as South Africa’s first democratically elected black President.

The biggest criticism against most biopics is that they tend to cast their subjects in a very soft and flattering light. Biopics tend to gloss over or purposely avoid showing their subject in anything that could possibly stain their subject in the slightest bit. Given the larger-than-life subject for this film, the filmmakers had a daunting task, however, the film does do a credible job in portraying Mandela as a living, breathing human being, not perfect, but continually striving.

The main reason for this portrayal is lead actor Idris Elba who plays the titular role. Most biopics struggle with finding the balance in presenting their subject as a hero without elevating them to the status of martyr. Elba strikes a fine balance, and presents Mandela as an empathetic hero who has his faults. We see the struggles he faces, particularly with his wife Winnie, played by Naomie Harris. The story doesn’t shy away from their domestic quarrels and arguments, often times showing how Mandela could be unkind and sometimes even cruel towards her.

Much of the action during the second half of the film involves political unrest, and there are scenes of rioting and acts of mass violence. Some of the more intense scenes involve women and children being gunned down by military police. There is a disturbing scene of a man being hacked to death with a machete, subsequently tied up, doused with gasoline and set on fire.

Profanity: There are a handful of instances of the s-word, but the most objectionable language is the numerous utterances of racial epithets and derogatory terms.

With awards season just around the corner, there is little doubt that “Mandela” is on the short list of movies that will be nominated for golden statues. With a number of films this year, vying for best picture, Oscar® will more than likely look over “Mandela,” however it would be a shame if they chose to ignore Idris Elba and his tremendous performance in bringing a true-life hero to the silver screen.

Comments from non-viewers
Neutral—I cannot understand why we lift up as heroes leaders who have espoused torture and murder (via the barbaric practice of “NECKLACING,” described below) of their political opponents! The Mandelas, whatever noble intentions they MAY have had, were tyrants and murderers in the end, as they allowed/espoused “necklacing,” and there is no excuse for it. Please read the WIKIPEDIA quotes here: “NECKLACING… is the practice of summary execution and torture carried out by forcing a rubber tire, filled with petrol, around a victim’s chest and arms, and setting it on fire. The victim may take up to 20 minutes to die, suffering severe burns in the process.

In 1986 WINNIE MANDELA, then-wife of the imprisoned Nelson Mandela, stated, “With our boxes of matches and our necklaces we shall liberate this country” which was widely seen as an implicit endorsement of necklacing…” Folks, you don’t DO or APPROVE this type of thing (i.e., “necklacing”) without at least the silent “agreement” of your spouse. Please, LET'S STOP MAKING and ATTENDING movies about tyrants who misuse power just as badly as the tyrants they propose to replace.