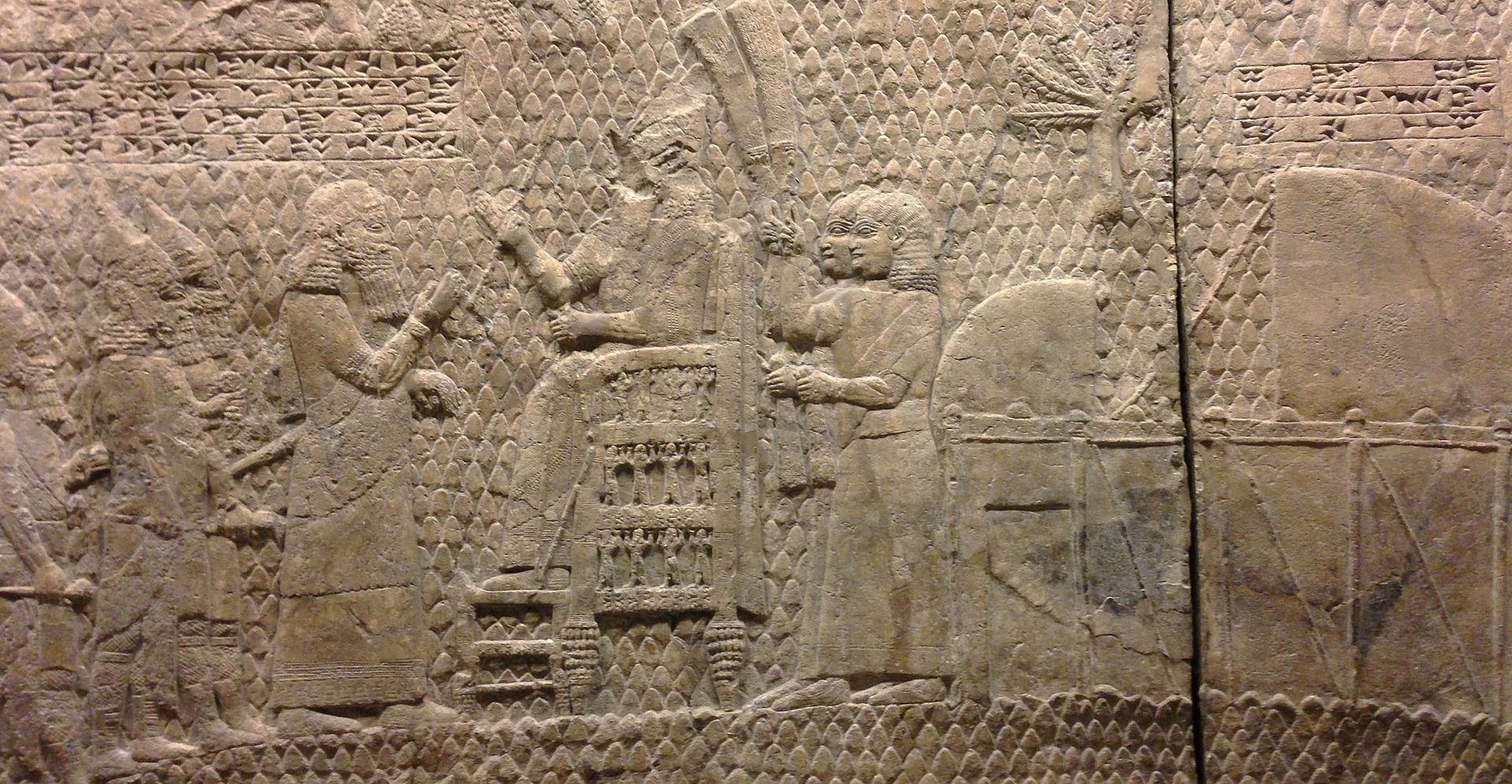 Sennacherib was king of Assyria during 705-681 B.C. He was eventually assassinated by his own sons.

“Like the Persian Xerxes, he was weak and vainglorious, cowardly under reverse, and cruel and boastful in success.”

The city of Lachish was assaulted and probably taken by King Sennacherib (2 Kings 18:14,17; 19:8; Isaiah 36:2). An account of this siege is given on some slabs found in the chambers of the palace of Koyunjik, and now in the British Museum. The inscription on the picture above has been deciphered as follows:

“Sennacherib, the mighty king, king of the country of Assyria, sitting on the throne of judgment before the city of Lachish: I gave permission for its slaughter.” (See NINEVEH.)

Attack on the Kingdom of Judah

He first set out to break up the powerful combination of princes who were in league against him. Among these was Judah’s King Hezekiah, who had entered into an alliance with Egypt against Assyria. He accordingly led a very powerful army of at least 200,000 men into Judea, and devastated the land on every side, taking and destroying many cities (2 Kings 18:13-16; compare Isaiah 22, 24, 29, and 2 Chronicles 32:1-8).

In the Assyrian annals, he gives his own account of this invasion:

“Because Hezekiah, king of Judah, would not submit to my yoke, I came up against him, and by force of arms and by the might of my power I took forty-six of his strong fenced cities; and of the smaller towns which were scattered about, I took and plundered a countless number. From these places I took and carried off 200,156 persons, old and young, male and female, together with horses and mules, asses and camels, oxen and sheep, a countless multitude; and Hezekiah himself I shut up in Jerusalem, his capital city, like a bird in a cage, building towers round the city to hem him in, and raising banks of earth against the gates, so as to prevent escape…

Then upon Hezekiah there fell the fear of the power of my arms, and he sent out to me the chiefs and the elders of Jerusalem with 30 talents of gold and 800 talents of silver, and divers treasures, a rich and immense booty… All these things were brought to me at Nineveh, the seat of my government.”

(Compare Isaiah 22:1-13 for description of the feelings of the inhabitants of Jerusalem at such a crisis.)

Sennacherib sent envoys to try to persuade Hezekiah to surrender, but in vain. (See TIRHAKAH.) He next sent a threatening letter (2 Kings 19:10-14), which Hezekiah carried into the temple and spread before the Lord.

Isaiah again brought an encouraging message to the pious king (2 Kings 19:20-34). “In that night” the angel of the Lord went forth and smote the camp of the Assyrians. In the morning, “behold, they were all dead corpses.” The Assyrian army was annihilated.

This great disaster is not, as was to be expected, noted in the Assyrian annals.

Though Sennacherib survived this disaster some 20 years, he never again renewed his attempt against Jerusalem.

He was murdered by two of his own sons (Adrammelech and Sharezer), and was succeeded by another son, Esarhaddon (B.C. 681), after a reign of 24 years.