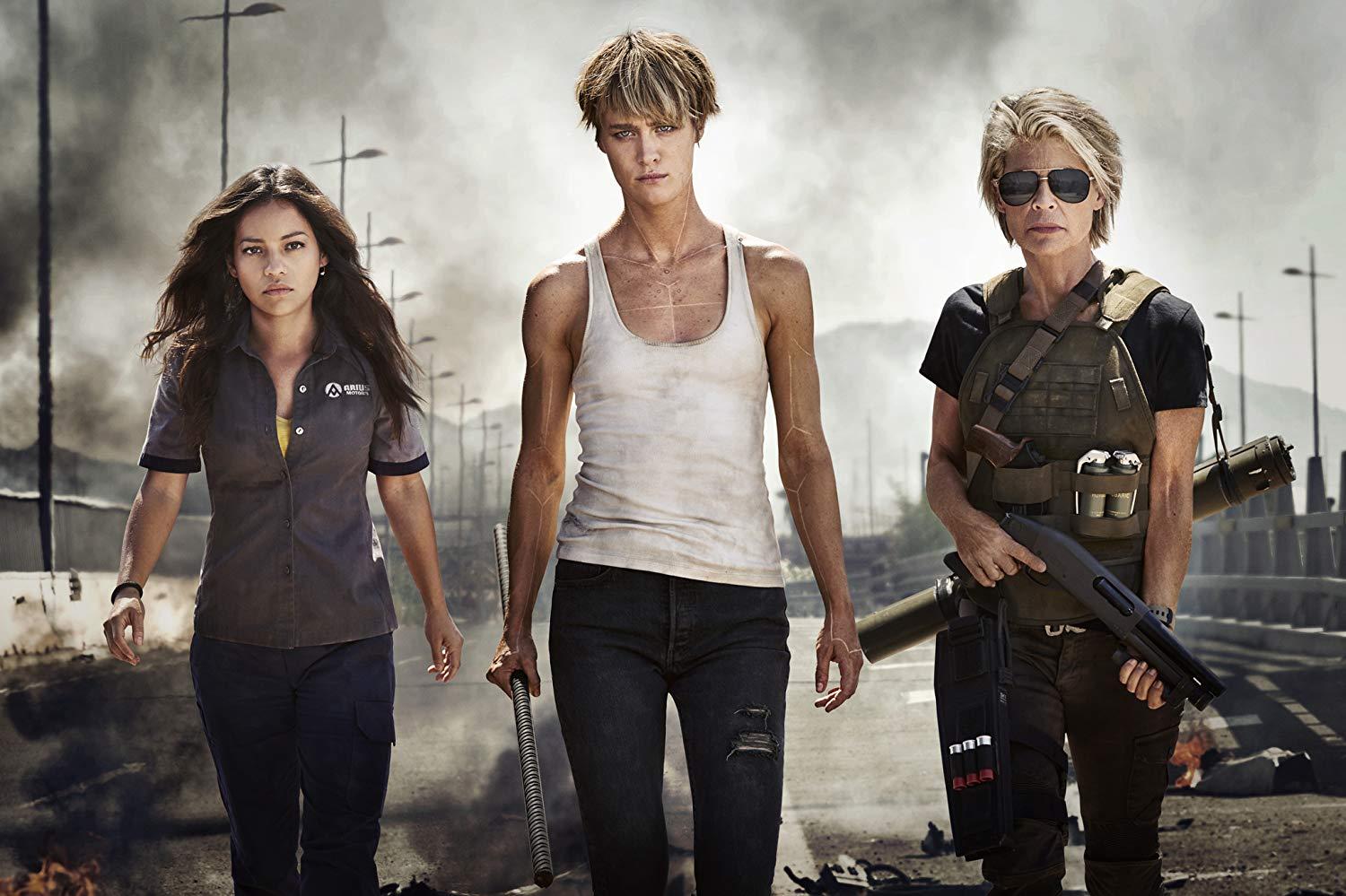 for violence throughout, language and brief nudity. 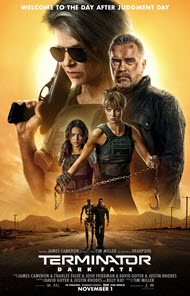 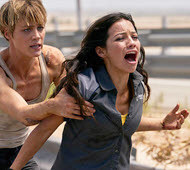 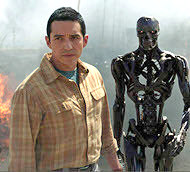 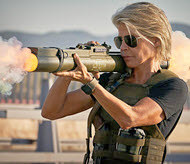 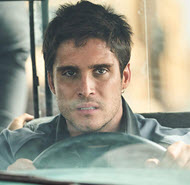 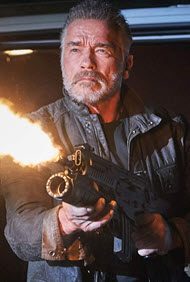 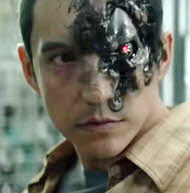 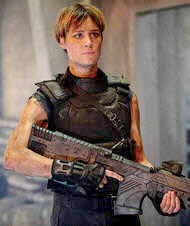 Dani Ramos (Natalia Reyes) is living the simple life as a factory worker in Mexico when a metal-morphing or ‘shape-changing’ Terminator, a Rev-9 (Gabriel Luna), is sent from the future to kill her. Enter Grace (Mackenzie Davis), an augmented super-soldier whose mission is to protect Dani and the future of the human resistance against the machines.

But Grace, although greatly augmented by futuristic technology, is not a relentless, unstoppable, untiring Terminator, and she comes perilously close to failing to save Dani when they receive unexpected help in the form of Sarah Connor (Linda Hamilton). Since Sarah, along with her son John Connor, defeated the creation of the artificial intelligence (AI) that would one day become Skynet, she has fought a decades long battle against any other Terminators sent into the past.

Can an aging Sarah Connor and a battle-weary super-soldier hope to defeat the newest and deadliest Terminator determined to end humanity’s resistance before it even begins?

“Terminator: Dark Fate” is a direct sequel to the hugely successful “Terminator 2: Judgment Day” and completely ignores all the “Terminator” sequels that have followed the 1991 film. As intense as its prequel, it elevates breakneck action over the science fiction that made the original 1984 film an instant classic and focuses on nostalgic callbacks over cohesive storytelling. A flawed but interesting movie in the ‘Terminator’ vein it contains frequent inappropriate content.

VIOLENCE: Very Heavy. The film begins with the killing of a young boy showing, his blood pooling underneath him, and the violence never lets up. Numerous victims are shown being impaled, stabbed, shot, blown-up, crushed, sliced and in some cases dismembered. Dead bodies are shown frequently in the aftermath of an ill-fated ‘Terminator’ encounter.

SEX/NUDITY: Moderately heavy but brief. Traveling back through time mandates that no clothes be worn, so both Grace and the Rev-9 Terminator appear naked when they arrive. Both are shown nude from the back and briefly from the side. Dani’s brother Diego is seen shirtless when getting ready for work. Two men are shown in their boxers. No sex or kissing is shown or implied.

DRUG USE: Mild. Grace is, underneath all her ‘augments,’ still human and after exerting herself in battle ‘crashes’ and needs to have various drugs injected into her in order to quickly regain her strength.

POLITICAL MESSAGING: Moderate. Dani is referred to as an undocumented Mexican national, which is a misleading politically-correct term for illegal alien. There is a possible Feminist and Girl-Power slant, in that all the human heroes depicted are women. Dani’s ability to instantly pick-up both driving and firing RPG’s doesn’t disprove that. Lastly, the forced gender debate in America is subtly inferred when Sarah says, “Sometimes mommies and daddies need to have grown-up discussions” in reference to herself and Grace speaking when Dani is out of the room.

Any film carries the potential for spiritual lessons, whether they are gleaned from good or bad characters. In this movie, themes included fate, fear and love.

Fate— The model T101 Terminator named Carl (Arnold Schwarzenegger) posits, “Do you believe in fate Sarah, or that we all can change the future every second by every choice we make?”

Too often people blame circumstances or even God himself for their problems, when in fact it is our choices that affect our “fate.”

“A person’s own folly leads to their ruin, yet their heart rages against the Lord.” —Proverbs 19:3 NIV

“When tempted, no one should say, ‘God is tempting me.’ For God cannot be tempted by evil, nor does he tempt anyone; but each person is tempted when they are dragged away by their own evil desire and enticed.” —James 1:13-14 NIV

Fear— When things seem most desperate, and Dani is given the choice to run or fight, she chooses the latter. She defiantly says, “I’m not going to live in fear the rest of my life.”

Our Father in heaven knows firsthand, through His only begotten son Jesus, that life here will be difficult for us. However, anxiety and fear do not come from the Lord, and His Word tells us we truly have nothing to fear if we go to Him.

“Do not be anxious about anything, but in every situation, by prayer and petition, with thanksgiving present your requests to God.” —Philippians 4:6 NIV

“I have told you these things, so that in me you may have peace. In this world you will have trouble. But take heart! I have overcome the world.” —John 16:33 NIV

LOVE— Carl is asked if he loves his adopted family, and he responds, “not as a human can.” However, we do see that he values their lives and well-being when he sends them away for their safety, knowing he may never see them again.

Grace likewise exhibits her love as she does not hesitate to sacrifice part of her humanity in becoming an ‘augmented human,’ knowing she may have to give up her life for Dani’s safety. These are but two examples of love that have never been better described than in Holy Scripture.

“Love is patient, love is kind. It does not envy, it does not boast, it is not proud. It does not dishonor others, it is not self-seeking, it is not easily angered, it keeps no records of wrongs. Love does not delight in evil but rejoices with the truth. It always protects, always trusts, always hopes, always perseveres.” —1 Corinthians 13:4-8 NIV

As a sequel to the films originally presented in Director James Cameron’s first two installments, “Terminator: Dark Fate” is an exciting but flawed call back to that classic sci-fi story. Some awkward dialog and forced humor mixed in with various implausible conceits unnecessarily hamper the film. Many fans will argue fatigue with a franchise that revisits the same plot devices, and they would not be far off the mark. If “Terminator 3,” “Salvation” and “Genisys” had not been made, then neither would those arguments, but that is not the case.

Diehard fans will probably enjoy “Terminator: Dark Fate” for exactly what it is, the sequel that should have been made 20-years ago but wasn’t. This film will likely appeal only to those adult fans of the franchise, but may not reinvigorate the series—if that was even its intention. Due to its glorifying of violence and poor language, this cannot be recommended for kids nor younger teens.

Positive
Positive—…let me start by saying if you’re going to see this movie in the first place you’re probably familiar with the saga and probably know what to expect here. I really enjoyed this movie. I gotta say there is good action and great fight scenes and good acting. Definitely one of the best of the year. I got an early screening, and while I really enjoyed the movie and had a ton of fun, there is…lots of blood, even profanity. If you believe this will bother you, I suggest you skip it all together, but if you think you can handle it, I highly recommend it. Just NO KIDS; it’s rated R for a reason.
My Ratings: Moral rating: Offensive / Moviemaking quality: 4½

Chris Dye, age 30 (USA)
Positive—This is an awesome movie. I watched it at the cinema in October (it was released here in the UK before it was released in America). The action scenes are fantastic, I didn’t notice any words that were taking the Lord’s name in vain, when movies use Jesus Christ’s name in vain, it really bothers me, but I did not hear that at all in this movie.

This film really tugged at my heartstrings, what Grace did for Dani and humanity.
My Ratings: Moral rating: Better than Average / Moviemaking quality: 4½

Nadine, age 36 (United Kingdom)
Negative
Negative—Lots of well-done CG and wild action, but the gratuitous foul language made me wince. Don’t think the previous movies had that much language. Huge theater, 4 other people watching it.
My Ratings: Moral rating: Very Offensive / Moviemaking quality: 4½